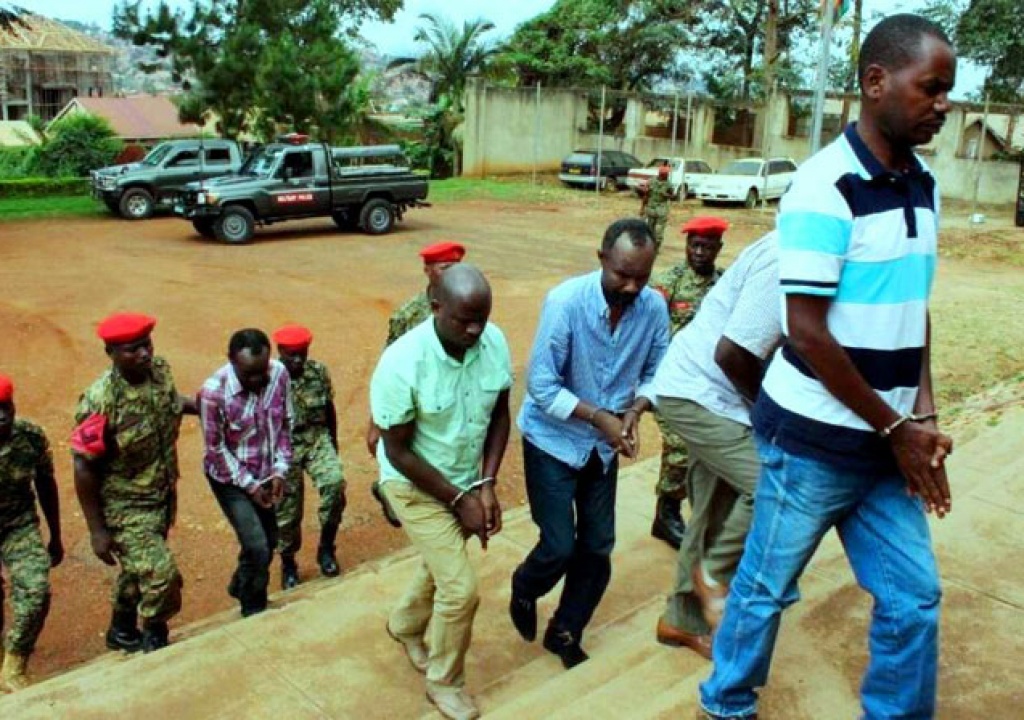 Rene Rutagungira, in blue shirt and dark blue trousers was brought to court by his kidnappers after Uganda High Court intervened. Though handcuffed, his hands are paralysed

Despite intervention of the Rwandan envoy in Kampala seeking information on a kidnapped businessman Rene Rutagungira, the Ugandan government denied it was holding him until the High Court came in. ‎It has now emerged he is paralysed due to inhumane torture.

KT Press broke the story about the kidnap of Rutagungira on August 9th. The businessman had not returned home after a night out with friends at Bahamas Bar & Accommodation located in Mengo. His wife, Hyacinthe Dusengeyezu ‎was tipped off by witnesses around 2:00am on August 7th and she immediately reported to police.

Little did she know she was wasting time. Rutagungira was dragged into a waiting Toyota Premio car UAT 694T that drove off at high speed. The kidnappers included Capt. Agaba David  from Uganda’s dreaded Chieftaincy of Military Intelligence (CMI).‎

When the Ugandan police was not helpful, the wife ‎Dusengeyezu petitioned Rwandan High Commission. It formally raised the matter with Ugandan Ministry of Foreign Affairs. KT Press has established that the High Commission was told no such person is in the custody of any government entity.

All the while, the news media was awash with reports that Rutagungira had been killed. Desperate for answers, wife Dusengeyezu filed a writ of habeas corpus case in the High Court of Uganda. Writ of habeas corpus is recourse in law through which a person can report an unlawful detention or imprisonment to a court and request that the court orders the custodian produce that person or the dead body to court to determine if the detention is or was lawful.

In a letter seen dated August 21st, the Civil Division of the High Court in Kampala “ordered that a writ of habeas corpus ad subjidciendum directed to the Chieftaincy of Military Intelligence – Mbuya and the Attorney General to have the body of Rene Rutagungira produced before High Court at Kampala on the 31st day of August 2017 at 11:00 o’clock…”

In response to the High Court order, Lt. Col. Augustine Bwegendaho, the director of special investigations branch of the UPDF said; “Rutagungira is not in our custody at Chieftaincy of Military Intelligence Mbuya or any of our known offices.”

The UPDF letter adds; “That we have questioned Capt. Agaba David (an operative accused of kidnapping Rene) and he denied knowledge of Rutagungira and was not involved in any of his alleged arrest.”

But then four days to the High Court issued deadline, ‎on October 27th, CMI, which had denied earlier any knowledge, produced Rutagungira, along with nine Ugandans, in a military court on charges of espionage.

‎Outside court after Rutagungira and other suspects ‎had been charged, Counsel Caleb Alaka who identified himself as their lawyer, told reporters that his clients had been tortured. But did not give details.

It has emerged that ‎Rutagungira’s condition is worrying the family. Held incommunicado‎, Rutagungira was  subjected to inhumane torture using various machines.

He was repeatedly water doused (head pushed in water) by his interrogators to suffocate him. Apparently, he cannot even hold anything in his hands as they became paralyzed during the torture, according a source who has seen him.

The source narrates; “They were using machines to squeeze his body to the extent that he could feel the pain in his born and suffocated with water. These were methods CMI operatives were using in interrogations to extract confessions, and to avoid outward injuries that can be notice by human rights. The torture stopped the day he was produced in court.”

“For the entire period he was confined underground, he never saw any person as he was always subjected to torture by operatives while blindfolded, ate only once a week, never took a shower or cut his fingernails; he reached to an extent of saying confessing what they wanted him to say so that he could see another day.”

Living in fear of the worst, at least Rutagungira’s wife has been able to have some relief.

She and Rene are Rwandan nationals who spend a significant amount of time in Uganda where the latter runs his businesses. ‎Had it not been for the footages from the nightspot CCTV cameras at the bar which clearly showed Rene being whisked into a waiting vehicle, he may have never lived another day.

Despite the evidence on the cameras, the Ugandan authorities still remained adamant that they were unaware of his whereabouts.

All the suspects said they were tortured and forced to make confessions under duress.

But why had the Ugandan authorities given false information to Rwanda’s Ambassador?

The family can only wait and see.

As for diplomats at the Rwandan High Commission, the hope is that their host government will make some clarifications through the usual framework of state-to-state communication.

What is Uganda hiding from her erstwhile ally, Rwanda, and what interest could motivate such change in attitude?

Peacekeepers Trained On How to Prioritise Civilians Interests