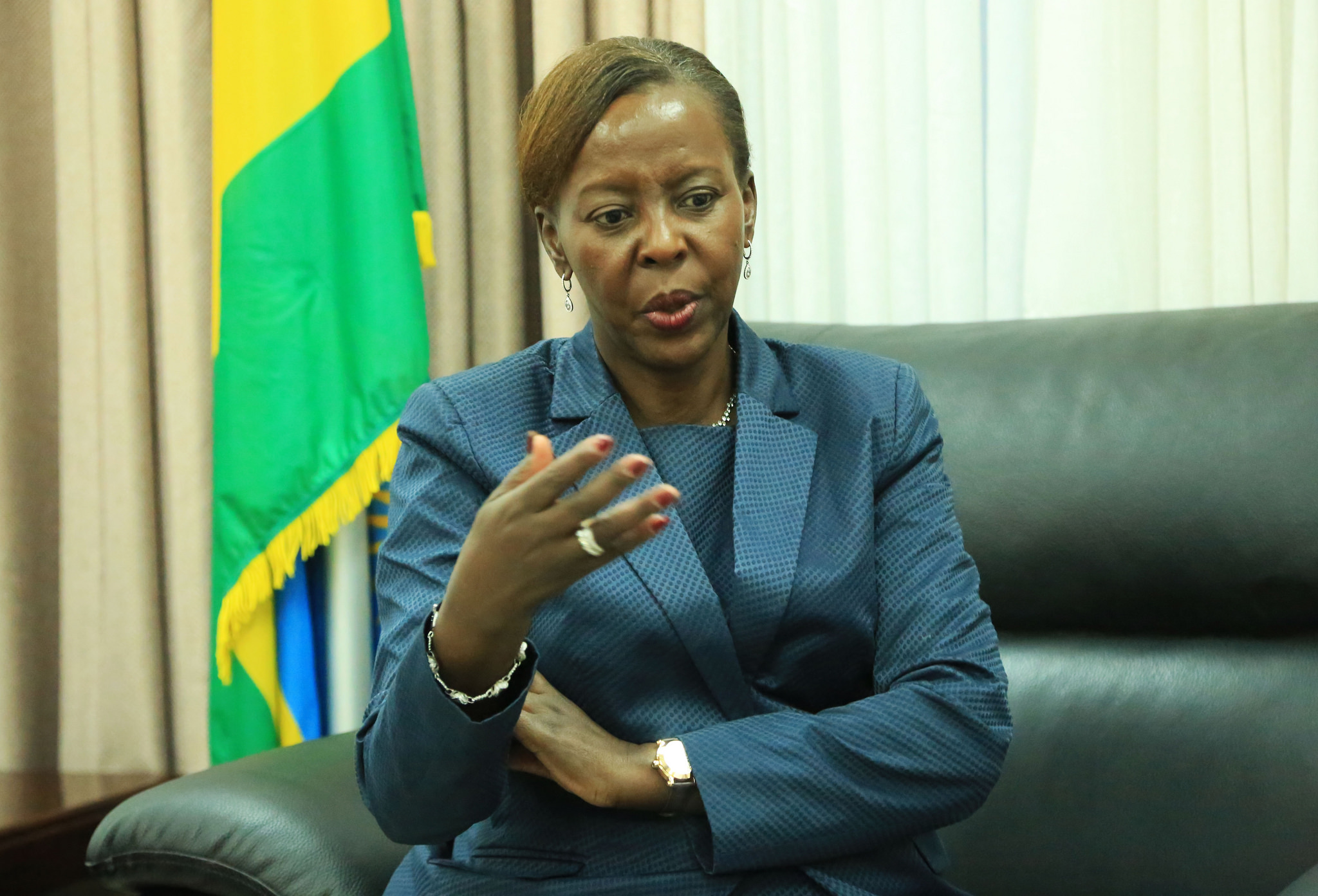 The government of Rwanda says it regrets to have heard comments that are allegedly attributed to US President Donald Trump targeting some African countries.

Speaking to journalists this afternoon, Louise Mushikiwabo, Rwanda’s Minister of Foreign Affairs, Cooperation and East African Community, said such comments if indeed were uttered are demeaning.

“If these comments were made, it is deeply regrettable. Second, is that there are certain realities regarding Africa, that Africa has to come to terms with,” Mushikiwabo said.

“In other words, we on the continent must do certain things to bring the dignity of the people of Africa and assert our worth as a continent and so, you know, comments such as those again, I am not sure if those were actually uttered…those words….but if it is, of course for the continent it is demeaning and it is unnecessary.”

Mushikiwabo had accompanied multiple delegates to meet President Paul Kagame at his office in Village Urugwiro.

The delegates include a Chinese delegation, Horst Köhler – former German President and Personal Envoy of the UN Secretary General for Western Sahara and Moussa Faki Mahamat the African Union Chairperson.

Yesterday, President Trump was reported to have used unpleasant words to reject an immigration bill.

For instance, a group of African ambassadors to the United Nations issued an extraordinary statement condemning what they termed as “outrageous, racist and xenophobic remarks” by President Trump and demanding a retraction and apology.

The statement was immediately shared by Former US Ambassador to the UN, Samantha Power on her Twitter handle saying it was strange to see Africa come together against a US statement.

“Whoa. I’ve never seen a statement like this by African countries directed at the United States. After an emergency meeting today at UN, Africa group says it “is extremely appalled at…outrageous and xenophobic remarks” attributed to Trump and “demands a retraction and an apology.”

Several other African officials had expressed shock of trump remarks.

Moussa Faki Mahamat the African Union Chairperson tweeted last night: “I am appalled by the unfortunate remarks attributed to the President of the United States on migrants from African countries, Haiti and Salvador.”

He added: “I am all the more dismayed by these statements that the United States is a unique example of the contribution of migration to national construction based on the values of diversity, tolerance and opportunity.”

Akinwumi A. Adesina – the President of African Development Bank came out emotional to comment on President Trump’s statement.

“I am an African and very proud of my continent. The opinion of others do not define Africa. Africa is beautiful and full of dignity.”

According to Adesina, some parts of America are poor. “US also has extreme poverty challenges too.

He quoted Prof Philip Alston as saying: “In Alabama, I saw various houses in rural areas that were surrounded by cesspools of sewage that flowed out of broken or non-existent septic systems.”

African Military Officers Show the Best of their Culture

We should all be applauded at Presidents Trumps remarks. Not only do they highlight a gross ignorance of the African contient and its people, they downplay the tremnendous contribution that African have made to the United States from its inception to present. Sadly this type of rhetoric is nothing new to the million of African American who live with racism in a democratic America. It has been Black and Brown people that have built the US, fought and died in every war for this land and continue to scrafice. We have cleaned toilet, raised white slave owners children. broke olymphic records and excelled in every discipline under the sun. No words can break the bond between African and African Americans. We see and aprreciate you valour, strength, compassion and humanity. Are we now going to be brought to our knees by ignorance remarks from a dotard? Africa can and will stand tall and proud of all its accomplishment.

Mr Tromp might be right in some ways.If African leaders will have the balls to uphold the rules of law and justice,put an end to corruption,uphold democracy in government,seek for progress of every citizen in each country,stop ruling for life,be transparent.There may be chance for progress.Africa has tremendous untapped potentials both in resources,people and good weather but all these are being squandered by nepotism and blatant corruption

I am not suprise to get those comments from a racist man.I doubt if he will ever visit this beautiful lands called Africa.Good and wonderful people from all ove the world have visited Africa.They were amazed of what they saw in these beautiful green hills.A lovely people full of love and dance and peace.Africa is for the Africans and i am a proud African.

Outrageous….Africa is beautiful and incomparable…

If president Trump disrespects partner states due to what I can call financial supremacy,then the next step is rich Americans will go kicking poor nations’ citizens despite being the consumers of there products.
Rwanda has taken a step in promoting locally made products;this should be emulated by other nations and Trump will know that America is rich due to Poor countries importations.

I can understand the comments, but why is any African or black/brown person shocked or surprised by the comments of the racist president of the United States of Racism, Genocide, and Hypocrisy? History is crystal clear with the acts of oppression, discrimination, and violence committed by Anglo-Saxon slavery and colonialism.
Africa must stop relying on the oppressors to suddenly humanize black & brown people after spending centuries treating, conditioning, and programming our ancestors & their decentant’s to self-hate, kill, and dehumanize each other. Africa can and must do better, but it starts with understanding the psychological damage that has/is being passed down like the biblical described “generational curse”. Post Traumatic Slave/Colonial Syndrome is real and until we address the damage, we will never heal, unify, and rise as one.

oooh my God , honestly we are proud of who we are and we have struggled so many bad things more than those no sense wards from Trump

Many of us in the US are mortified and disgusted with President Trump’s remarks. He is not qualified to rule our country. We are ashamed.

This is a wake up call for African leaders to step up to the plate of reality.Stop corruption and nepotism in their governments