Gilbert Mugisha, father of one, is building a 4 room-house at Rusine, Masoro Sector in Rulindo District and he was hoping to finish it at the end of April 2018 to escape renting.

While his house is at the finishing level, Mugisha is in a total shock because his budget has almost doubled in just a couple of weeks.

“I did not believe them, and I decided to go to wholesalers at Nyabugogo and here, a bag was at Rwf11, 000,” he said, adding that he was obliged to adjust his stock to 27 sacks.

But when he returned to the same shop to buy the remaining 5 sacks a week later, the wholesaler had also increased the unit price to Rwf13,000 and only the lucky ones could get it.

Like Mugisha, Rwandans who have plans to build massive structures or small projects have put them on hold following a sudden rise of cement prices since March 2018.

The issue started with local cement suppliers who were informed of upcoming shortage hording the cement in early February, prompting a steady increase in prices.

The increase of price affected the local cement from the sole cement factory Cimerwa, a subsidiary of South African PPC Ltd – South African Cement Company and the imported cement – Twiga and Simba of Tanzania and Hima Cement from Uganda.

Consumers who expected the price to stabilize in a few days gave up and went back to the market causing the cement prices to sky-rocket. 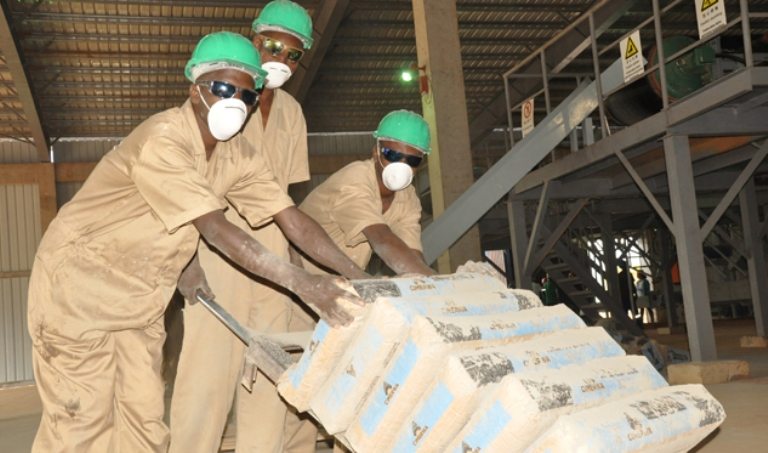 So far, Cimerwa, the plant which has the prime responsibility to satisfy the local market was the first to be compelled to provide explanations on the hike of cement.

On March 28th, when the burden was already high and price speculation unbearable, government, in collaboration with Cimerwa broke the ice.

They informed cement traders, consumers and the general public that Cimerwa was undergoing scheduled plant maintenance which is expected to be completed by 20th April 2018.”

“As a result, there has been a reduction of daily supply of cement to the market.”

They warned traders to maintain the unit price at a maximum of Rwf10, 000.

“Whoever will be found trading contrary to the above price will be penalized with a fine of Rwf20.000 to Rwf2million depending on severity of the offence,” Minister of Trade and Industry (Minicom) said in a joint-statement with Cimerwa.

In 2013, Cimerwa was upgraded to have a production capacity of 600,000 tons up from 100,000 tons. This was expected to satisfy local market and to end cement import which is deepening trade imbalance in Rwanda.

However, 4 years down the road, Cimerwa is still producing below the capacity of its plant.

According to Cimerwa officials, the plant’s current effective capacity is 400,000 metric tons per year while the design capacity is 600,000 Metric tons annually.

In the last 4 weeks of the crisis, cement consumers have already started feeling the consequences.

Rhino concrete fabricators has been depending on Simba cement for its fabrication works on paver blocks and tiles has been forced to shift to other types available because of the demand in speculation activities.

Ignatius Ntirenganya, the plant manager says that out of the 30 casual laborers at the Remera and Nyarutarama production sites, only 15 have been retained since start of April, and others fired.

“We had to lay off the workers because there is nothing to do. This way we reduce on the cost so as to recover the margin cause by the high prices of cement,” Ntirenganya said.

The company has also cut on raw cement bags from 50 to 10 bags per day to produce tiles only on order.

Cimerwa explains that in fact, to manage a crisis, some consumers are likely to be victims depending on priorities.

“The plant never ran out of cement, but rather took a decision to spare the limited cement volumes for strategic projects, thus ensure that strategic infrastructure projects are on course during the maintenance period,” Bhekizitha W. Mthembu, the Cimerwa PPC Chief Executive Officer told KT Press on Monday. 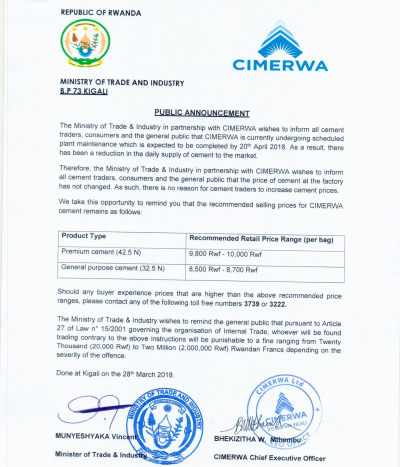 Ongoing public infrastructures of premium importance include Bugesera International Airport whose building allegedly in concrete from foundation to the rooftop.

Construction of model villages across the country by the Rwanda Reserve Force is also another priority, among others.

While focusing on the esteemed clients, Cimerwa still had to import raw materials- “clinker from the UAE to ensure that strategic projects in country continued to be supplied with cement”, according to Mthembu.

Cimerwa however had promised to put a smile on the faces of consumers by April 20th.

“The recent maintenance and upgrade exercise conducted by Cimerwa during the month of April is expected to improve the previous plant effective capacity by more than 25%,” Mthembu said.

The maintenance and upgrade will push Cimerwa to 500,000 Metric Tons Annually, which is 80% capacity optimization.

“This will see the cement shortage experienced during the maintenance period being the thing of the past. This upgrade will improve equipment reliability and operational efficiency, and as such ensure that Cimerwa is geared up for the forecast increase in cement demand within the region.”

Cement, at retail price, was available at Rwf13, 000 by press time. Apparently, consumers may have to wait longer.