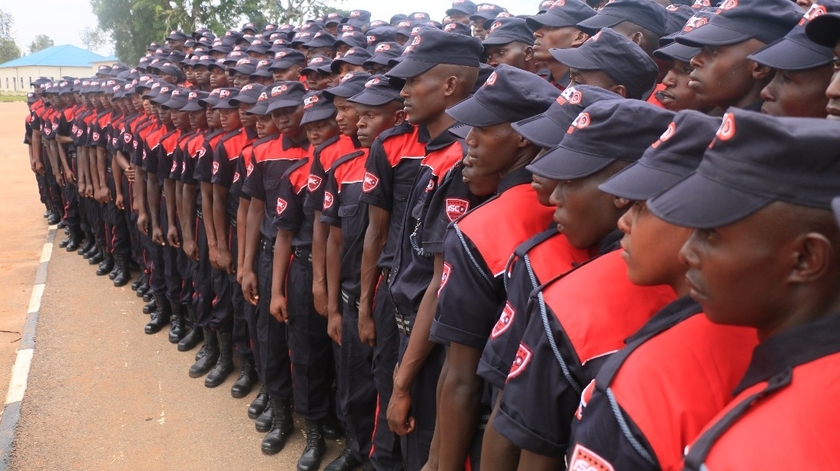 ISCO security guard in a training. Gemarny companies want to bring in their know-how

Rwanda Private security service providers have entered a partnership with their German counterparts to support a training center which is expected to boost local companies’ effectiveness.

A delegation of 12 German security services companies was in Rwanda on May 31 to announce their plan to invest in Rwanda.

The multibillion dollar family owned business like Dragger, Airbus Defense & Space, Eagle Security, Brandmeister-Kleiner, ZST and Bertling are among the firms which expressed interest in expanding to Rwanda.

For example, Eagle security and Consulting comprised of former military intelligence and analysts operating in over 50 countries said that their plan is to focus on training private guards.

“We are looking forward to transferring our guards training expertise to Rwanda, where all guards will have the same level of skills and professional service as it has been done in other countries,” said  Karim Albert Bremer, the CEO of Eagle Security and Consulting.

Mirco Spitzbarth, the Business development Manager of Dragger Safety AG &Co– a global multinational firm leader in alcohol test, drug test and medical equipment operating in over 190 countries, said that their plan is to have suppliers locally.

The companies expressed their interest to tap into the local market at a time when the Rwanda Private Security Industry Association (RPSIA) plans to construct a security guards training center in Gasabo district to provide professional skills to over 20,000 guards currently spread at different posts countrywide.

“We are planning to build the school as soon as possible. We have already secured land from Gasabo district. The next step is to conduct a feasibility study which will detail how the school will operate,” Nshuti Rugerinyange, the Chairman of RPSIA told KT Press exclusively.

He explained that German based professional security companies expressed interest in Business to Business (B2B) partnerships with Rwandan companies.

Since 1997 Rwanda’s private security companies have grown from one to 16 companies.

The German ambassador to Rwanda, Dr. Peter Woeste, said that Rwanda has an outstanding security system and policy, but encouraged Rwanda to adopt systems like dashboard or body cameras which also monitor the police and the security guards.

“Don’t misunderstand me for these critical remarks but where there is dialogue with the community, and room for improvement then communication can bridge safety and security,” Woeste said.

Rwanda National Police (RNP) Spokesperson, Commissioner of Police CP Theos Badege told KT Press that this suggestion to train security guards can be put into consideration and the force is ever open for any room for improvement.