Rwanda’s Akagera National Park is mourning the death of its oldest and pioneer elephants brought to the park.

“It is with sadness that we announce that Mutware, Akagera’s most well-known elephant, has died,” Akagera Park management said in its weekly newsletter.

The 48-year-old Mutware was one of the original 26 young elephants, who were all under the age of eight years, brought to Akagera from Bugesera in 1975 in what was, at that time, a groundbreaking conservation effort to eliminate human-wildlife conflict from the area and restore the species to Akagera where elephants had previously existed.

Mutware – loosely translated as “Chief” has been known in all circles of wildlife lovers in Rwanda.

He was easily recognizable to those who knew him, he had broken his tusks years ago, Akagera management said in reflection of what could have been led to his death.

“Mutware was infamous, raised alongside humans as a young elephant, he was familiar with people and, in the past, was quite a tourist attraction with visitors coming to touch or feed him,” the statement from Akagera says.

“Unfortunately, however, he was also notoriously disruptive and had a long rap sheet of anti-social behavior, sadly all as a result of his early human interaction,” the statement adds.

According to the management of the Eastern Rwanda-based National Park, in his last years, Mutware would spend most of his time at the very southern tip of Lake Ihema, often in the water, only traveling through the park once a year for a few weeks at a time.

“Mutware’s death appears to be of natural causes,” the statement says.

Meanwhile, messages continue pouring in to eulogise the death of Rwanda’s oldest and most lovable elephant.

“Rest In Power and Majesty dear Friend #Mutware, thank you very much for your kindness, last time we met, you let me pat your coarsed skin, it was in 1999. Your legend to live on through tales told ’round fires at night falls. May the Lions of #Akagera roar tonight in your honour!” Tweeted one tourists who met the elephant. 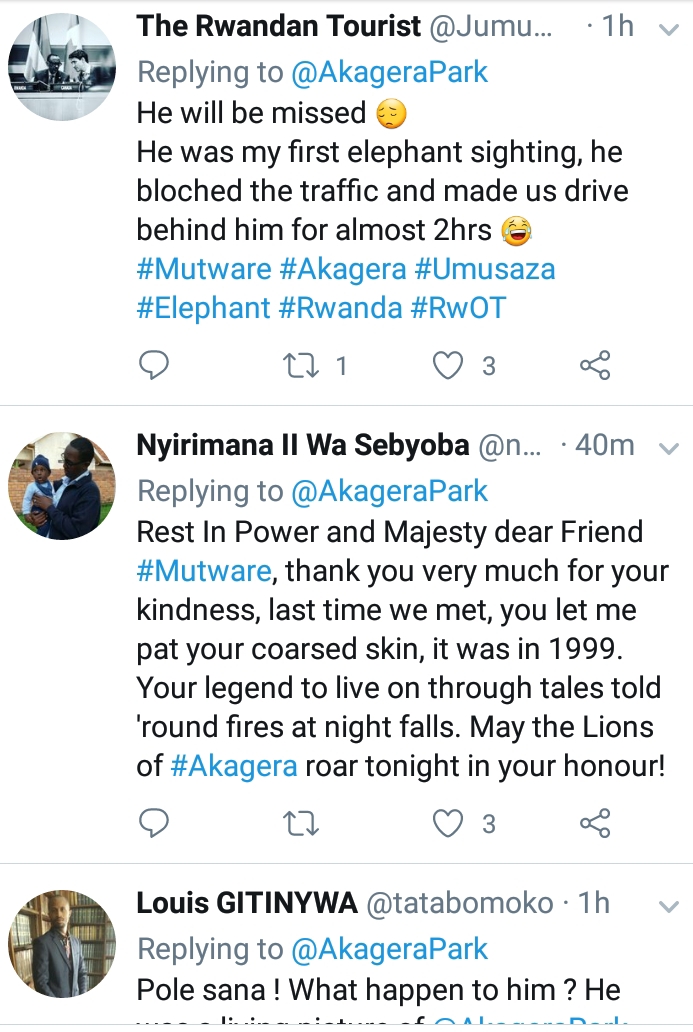