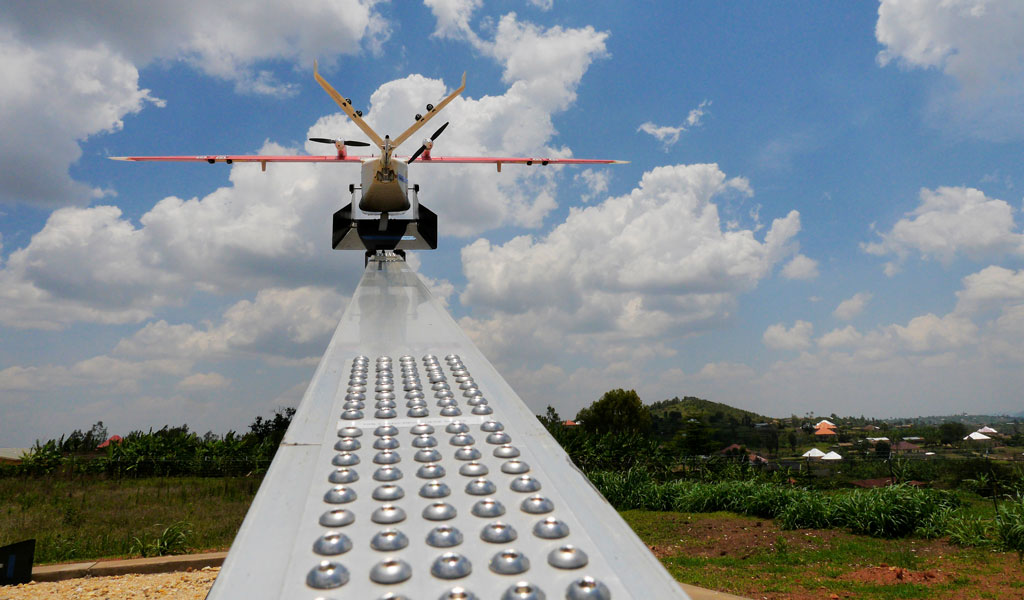 Rwanda has finalized all infrastructure and logistics to start a new drone port which will increase the destinations of drones used in blood and medicines delivery to 430 hospitals and health centers.

In February 2016, Rwanda Government hired Zipline Inc- a California-based robotics firm to build the drone port in Shyogwe Sector, Muhanga District – Southern Province in a bid to improve accessibility to blood and emergency medical supplies to remote parts of the country.

Currently, Shyogwe drone port is supplying blood to 18 hospitals from Southern and Western Province, but a new drone port in Kayonza, Eastern Province will increase the blood delivery fifteen fold.

“Kayonza Drone Port is ready for use, we are only waiting for the Rwanda Civil Aviation Authority approval (RCAA) to start using the facility,” Dr Saibu Gatare, Division Manager for CNTS, told KT Press on Thursday.

Saibu said, the center will increase the number of health facilities that are served to 30 hospitals.

Moreover, both drone ports will start supplying blood and medicines to 400 health centers.

“For the time being we have started testing drones’ delivery with transport of water instead of blood, and by experience, we are ready to start as soon as we get approval from RCAA,” Saibu said.

Meanwhile, on October 24th, the Cabinet Meeting approved an agreement between the Government of Rwanda and Zipline for the delivery of medical products via drones.

According to Israel Bimpe,  National Implementation Program Manager at Zippline, the deal for Zipline to supply medical equipment in Rwanda was part of its initial project, but was to be implemented in phases.

“Now as the Government has approved the agreement to supply the medical products we are immediately going to start delivering them in the areas where we deliver blood,” he said.

Using drones in blood delivery is yielding fruits in the remotest health facilities of the country.

Just after launch of the blood delivery by drones by President Paul Kagame on October 14th, 2016, the turnout time between ordering and receiving blood was shortened from 4 hours to 15 minutes on average.

“Some hospitals would make more than 3 hours to make a round trip to the National Center for Blood Transfusion (CNTS) to access blood,” Dr. Saibu Gatare, told KT Press.