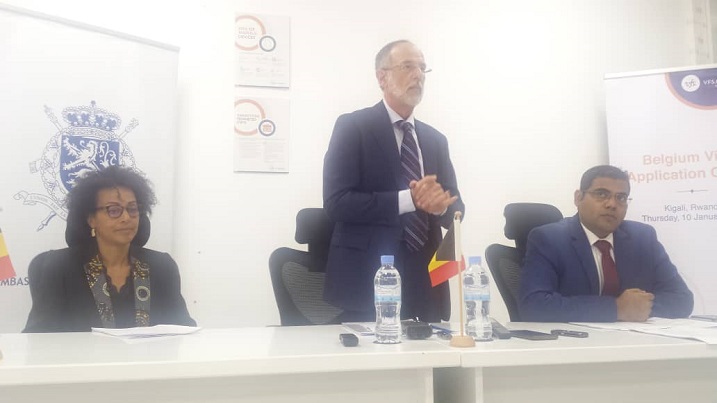 The Belgian embassy in Rwanda has outsourced a private company to manage Schengen visa application procedures, which could reduce the risk of conmen preying on Rwandan applicants.

The Embassy has launched a Visa Application Centre to be managed by VFS Global, an outsourcing and technology services specialist for governments and diplomatic missions worldwide.

It has operations in 141 countries and around the world and in Rwanda, its office is located near the Soras Insurance Company’s headquarters in Kigali.

The decision comes to help a large number of Rwandans who have in the past five years picked interest in traveling to the Schengen countries.

Volumes of applicants increase over the years.

Of all applicants, 85% were granted visas entries into the 19 Schengen countries, while 15 % were rejected as a result of lack of required documentations.

“This requires too much logistical work for the embassy. So we agreed to look for a credible outsourcing company which will only handle the application process and the embassy will concrete on its core business of granting visas,” Ambassador Benoit Ryelandt, the Belgian envoy to Rwanda said.

Ryelandt was addressing a press briefing on Thursday. The new visa application procedures will be effectively implemented on January 15th.

According to embassy officials, interest in traveling has put some Rwandans in a position of becoming vulnerable to conmen as a result of waking up early in the morning and spending hours at the embassy gates waiting to be received.

“We have been working with Rwanda police on this problem of conmen, some have been arrested but we want to make it clear that it’s only VFS Global that can handle visa application now. Anyone who deals with another person is at own risk,” said Solange Kassianoff, the Belgian Consul in Rwanda.

Kassianoff says that with the outsourcing VFS Global services, these risks have now been mitigated.

For example, as soon as an applicant enters the VFS Global office, they will be provided with a checklist of requirements, printing services and full security of the biometric information.

The visa fee payments will be done on the counters inside the VFS office in Kigali.

“This in itself will reduce the risk of forging because our staff are monitored with a high level security system and in case of malpractice it’s easy to trace their conduct. We will also need to educate Rwandans of the services available,” said Hariprasad Viswanathan, the VFS Regional Head of Sub-Saharan Africa.

The Belgian embassy becomes the first diplomatic mission in Rwanda to officially put in place an outsourcing facility, which is common in many African countries.

Africa’s Single Market to Come into Force In July 2019

This Private Company For Schengen Visa Applications would really help the processed be more fast and less hassle. Theres some that might help you explain and guide on the requirements and the step by step process. Here are the sites: