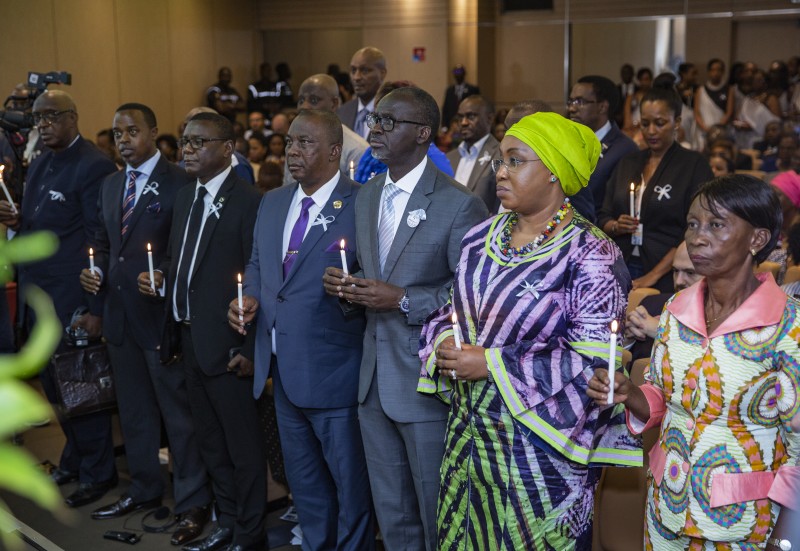 With poems, videos and a riveting testimony from a former Prosecutor General of the United Nations International Criminal Tribunal for Rwanda (ICTR), the African Development Bank, in collaboration with the Rwandan Embassy and the Rwandan community in Côte d’Ivoire, observed the 25th commemoration of the Genocide against the Tutsis in Rwanda under the theme “Remember-Unite-Renew”.

The event, held Thursday, April 18, was attended by the Ambassador of Rwanda in Côte d’Ivoire, Stanislas Kamanzi, and the Rwandan community; a delegation of the Government of Côte d’Ivoire led by Kobenan Kouassi Adjoumani, Minister of Animal and Fishery Resources; members of the diplomatic corps and Bank employees.

The ceremony also included the lighting of candles to commemorate the occasion.

Former Prosecutor General Ousman Jammeh shared that, through his work with the ICTR, he had the opportunity to see first-hand the courage and resilience of genocide survivors in their difficult testimonies.

He also drew attention to the crucial role that the media played in enticing hate and division and called for Africans to closely learn from this tragedy.

The commemoration of the genocide against the Tutsis in Rwanda is an opportunity to remember and honour over one million lives lost within three months in 1994.

In Rwanda and across the world, the commemoration is a moment of reflection on the past and a time to recommit to the pledge of “Never Again”.

Oley Dibba-Wadda, the Bank’s Director of Human Capital, Youth and Skills Development who spoke on behalf of President Akinwumi A. Adesina, stated that the 1994 genocide remains “a deep scar on humanity’s conscience.”

She expressed her solidarity with the people of Rwanda during this period of commemoration and saluted the bravery and sacrifice of those who risked their lives to save others.

Dibba-Wadda also commended the resilience and determination of the Rwandan people, especially Rwandan youth, whose dynamism and sense of purpose are already shaping country’s future for the better.

She concluded by reaffirming the African Development Bank’s commitment to continue its strong partnership with Rwanda on its journey of transformation.

In his remarks, Minister Kobenan Kouassi Adjoumani, representing the Prime Minister, stated that the genocide against the Tutsi in Rwanda reminds Africa and the world of the dramatic consequences of policies based on hatred, communitarianism and any other form of divisionism.

He underlined the importance of educating African youth to equip them with the tools to systematically reject genocide ideology and protect unity.

Addressing the participants, Pacifique Kayihura, President of the Rwandan Diaspora in Côte d’Ivoire, highlighted that the progress made in Rwandan over the last 25 years in the areas of unity, justice, reconciliation and development, demonstrate that no country is doomed to failure and that “our strength lies in unity.”

He further urged the participants not to be indifferent to impunity and the suffering of others.

In his closing remarks, Ambassador Stanislas Kamanzi thanked the Government of Côte d’Ivoire and the African Development Bank for the solidarity shown during this period of commemoration.

He reiterated that over the past 25 years, “while we mourn the loss of our loved ones, we do not let despair bring us down. Rwanda has instead embarked on a challenge of rebirth…for an inclusive, equitable, dignified and prosperous society.”