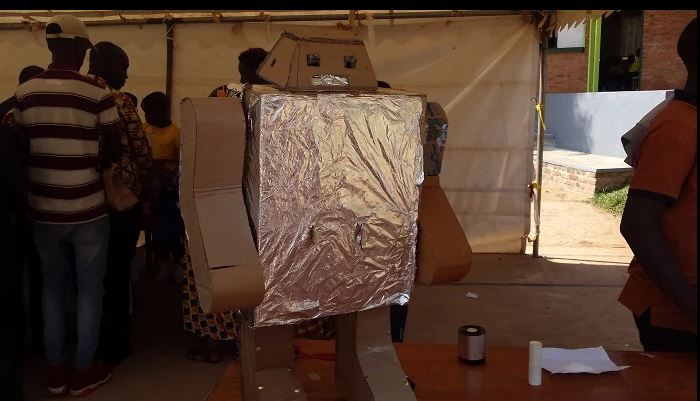 Simon the Robot. The students called it a brother to Sofia the Robot

APACOPE, a high school in Kigali has students who dream big and who believe that if David Hanson, the founder of Hong Kong-based Hanson Robotics which created Sofia the Robot could do it, they can also do it in Rwanda.

Well, the technology they used, the exactness of their creation is a story for another time, but the adolescents from senior three managed to create ‘Simon’ whom they called ‘a male human robotic”.

“We were inspired by the technology the robotic company used to create Sofia the Robot which attended Transform Africa in Kigali last month,” said Aristide Bertrand Vuningoma, one of the students in this co-owned project.

The robot speaks four languages including; Kinyarwanda which is the mother tongue of the students, English, French and Swahili, thanks to an inbuilt transmitter that senses the human voice. The voice is heard through speakers.

Like Sofia, Simon answers questions that people put to him, and the students know to compare their technology to Sofia’s.

“Our technology is not that much developed. Ours can afford to answer a question after thirty seconds, compared to Sofia which can answer within five second while it tales Sofia some five second to load the answer to a question,” Vuningoma said.

The young boy however, believes that their robot “can attend conferences and speak on behalf of an official who was not able to attend the meeting.”

Simon the Robot was exhibited at an open day which brought together parents and teachers to celebrate achievements of their children.

The students showed them several other innovations which they propose as solutions to different challenges in the community.

Emile Moran, President of Parents – Teachers’ Association (PTA) in this school said: “This is what our children can achieve when you give them an opportunity to dig deeper.”

He further said: “It is amazing how at this age, they can afford such a big dream.”

RDF Generals Take You Through The Liberation Journey