Rwanda has dismissed reports that Rwanda and Uganda could be closing in on an understanding to quell tensions between the two countries following unconfirmed reports that President Paul Kagame and Uganda’s Foreign Minister Sam Kutesa met behind closed doors last week to discuss bilateral ties.

Rwanda’s Minister of State in Charge of the East African Community Olivier Nduhungirehe told KT Press on Monday that as far as the Government of Rwanda is concerned, Uganda is yet to address the issues Kigali raised and as long as it hasn’t, the current situation will remain.

Ambassador Nduhungirehe did not confirm whether indeed President Kagame met with the Ugandan Foreign Affairs Minister who reportedly presented a special message from President Yoweri Museveni of Uganda, pointing out the situation remains the same because Uganda has not responded to the concerns Rwanda pointed out and presented evidence for.

“The situation is still the same. There is no significant progress made because Uganda is yet to act on the issues we raised. We have not seen anything different or new. Many Rwandans are still languishing in jail without trial, though we see some being dumped at the border,”

“Support to terrorist groups has also not stopped. The likes of Rwanda National Congress are still active in Uganda. Despite giving Uganda all the details, nothing has been done to address these two issues,” Amb. Nduhungirehe said in an interview. 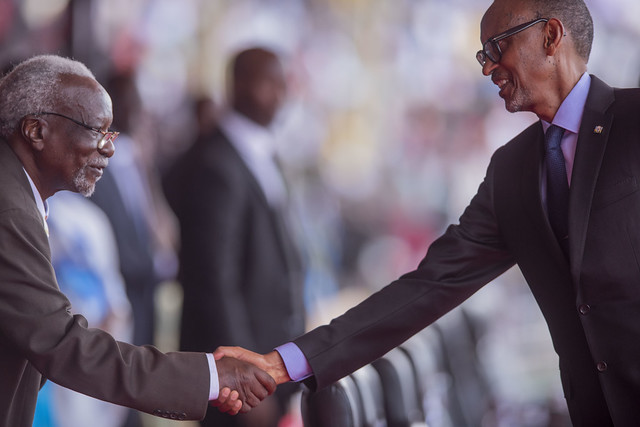 Nduhungirehe said that Uganda’s Second Deputy Prime Minister and Minister of East African Community Affairs Kirunda Kivejinja who recently led a Uganda delegation to the 25th Liberation anniversary celebrations, delivered a letter from President Museveni stating that he could not make it for the occasion.

“It doesn’t require a summit or the two Heads of States meeting. Uganda needs to address these two issues. We have provided all the details required and we are waiting for the Ugandan government to act,” he added.

Regarding the reopening of Gatuna One Stop Border, Minister Nduhungirehe said that frontier will reopen as soon as construction works are finished but said that the advisory to Rwandans not to travel to Uganda will remain in place if the East African country doesn’t address the issues raised.

“ Rwandans will still be advised not to travel to Uganda if  the country does not act because we cannot guarantee their security while in Uganda,” he said.

Minister Nduhungirehe also spoke out on a recent case filed by a coalition of civil society groups against Rwanda and Uganda in the East African Court of Justice over financial losses they allege resulted from the border closure.

The groups argue that the border closure, which Rwanda says was aimed at fast-tracking construction of the One Stop Border Post, has affected trade and life along the border communities of the two countries since February.

In their petition, the civil society groups want the two countries to reopen the border facility arguing that it has affected local economies of both countries which rely on cross-border trade.

According to Sheila Kawamara, the Executive Director of the East African Sub-regional Support Initiative for the Advancement of Women, one of the complainants, in the case, the regional court should compel the two countries to resolve outstanding issues and reopen the border as soon as possible.

Minister Nduhungirehe said that the case is misplaced because the current situation has nothing to do with the closure of the border but rather genuine concerns affecting free movement of people and goods which Rwanda has raised with Uganda.

“If anything, we should be the ones suing Uganda because the issues we raised violate EAC protocols. We have seen the reports of the case but it should have focused on the issues we have raised on the other side of the border because that is where the problem is, not the border itself,” Nduhungirehe said.

Gatuna remains closed to heavy trucks but small and medium vehicles can still use the border which is on the northern part of Rwanda and the south western part of Uganda.

Rwanda maintains that hundreds of Rwandans continue to languish in jail in Uganda without trial while hundreds more have been arbitrarily deported back to Rwanda despite legally entering Uganda – something Kigali says violates the free movement of people and goods protocol.

Rwanda also maintains that subversive Rwandan groups mainly RNC are active in Uganda and are supported by security organs in their efforts to distabilise Rwanda.

Kampala on the other hand said those arrested were engaged in acts of espionage and were operatives penetrating Ugandan security institutions. Rwanda categorically denies the accusations.

Efforts by President Kagame and President Museveni to meet have not resolved the outstanding concerns.