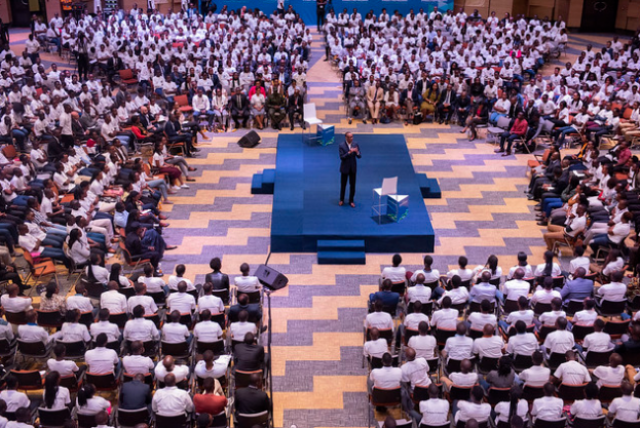 President Paul Kagame has dismissed reports that Rwanda fakes statistical data, pointing out that there is nothing doctored, fake or manipulated about the progress Rwanda has made in the fight against poverty in recent years as alleged.

While addressing over 2, 000 youth at Intare Conference Arena on Wednesday at an event dubbed ‘Meet the President’, President Kagame spoke about an article which was published by Financial Times on Tuesday, titled “Rwanda: where even poverty data must toe Kagame’s line”.

The Head of State said that the article is partly a result of longstanding ‘western’ superiority and a deliberate scheme to discredit the achievements of the country.

He partly concurred with commentators that allegations are part of ‘western propaganda’ but largely put it on the supremacy of western media which always looks down upon Africans.

President Kagame said that he is convinced that the article, which largely quotes Rwandan dissidents and critics, was aimed at creating an impression that Rwanda fakes data to show the world that all is well when in actual sense it is not true.

“I wish I could make any data toe my line because my line, I am convinced, is a good one. At the same time, I will bet with anyone that there is actually nothing fake or fabricated or doctored about the progress we are making. There is no question about that,” President Kagame said.

“If anyone is saying we still have problems to deal with, then they are right because there are still many challenges we have to deal with. We are dealing with them and we will deal with them,” he adding that there is no news in Rwanda having problems.

The publication claimed that in its investigation, it found that some statistics could have been manipulated by the National Institute of Statistics of Rwanda (NISR) to disguise a rise in poverty, and the World Bank reportedly defended the analysis.

The London-based publication, quoting renowned Rwandan government critics such as David Himbara and Belgian scholar Filip Reyntjens, alleged that between 2011 and 2014, NISR did not initially make adjustments to the results of the previous Integrated Household Living Conditions Survey (EICV3) and the findings of EICV4, in line with changing how the poverty lines are measured.

In not doing so, FT claimed NISR rendered the government’s comparison of poverty levels between 2011 and 2014 flawed. The Statistics institute on Tuesday dismissed the article which they said is not factual.

President Kagame said that there is nothing new about Rwanda having problems, and the entire country working together to make a difference for the citizens but maintained that the biases in the story came out at the same time Rwanda was getting credited in other headlines.

“The same time that story is going on in FT, there are also many other stories based on facts going on, whether it is the World Bank, the IMF or the World Economic Forum…call it want you want. Also if you follow news, the rating agency, S&P, rated Rwanda from B to B+, with a positive outlook, the same week Rwanda is said to fake data about improvement in poverty levels,” he said.

He called on young people to reject the mindset of patronage, which makes some people think that they are superior to others and purport to know what is good for others, pointing out that he is always ready to engage them.

“That is why I really want us to be together in this fight, because it is a fight for who we are and who we want to be. It is a fight about ourselves, about Rwandans, about Africans,” he said.

“We have been so downtrodden largely because of ourselves. Because we have not addressed some of the things that people build on to look down upon us,” he said.

In a session characterised by young Rwandan innovators, achievers and academics sharing their experiencies with the youthful crowd, President Kagame said that when people don’t solve their problems and look up to others, they put themselves in the vulnerable position of being looked down upon.

“These are the problems that are going to create ground for people to look down upon you and I think you are largely to blame when that happens. We should first take this blame. I also think some of these people have no right whatsoever to look down upon people,” he said.

He urged the young people to create a ‘Rwanda that we want, that we feel is good for us’ without allowing anybody to dictate upon them what they think is good for them.

“If we don’t develop the mindset that all these things we are trying to achieve are good for us, that we are not doing this because we want to impress anybody, then everything else we discussed, impressive as it was, will be wasted,” he told the youth.

He said that it is fine to have a conversation where people will have different views, or argue about facts and at some point it narrow down the conversation to what is good for everyone but without one party dictating upon the other.

“That is something we should not accept. We are still far from where we want to be but surely we don’t want to be where other people want us to be.

He challenged the youth to be more ambitious and innovative but bearing in mind their origin because you can only start by building that place from which you are from, which is the starting point.

The Head of State cautioned the youth against engaging in drug abuse and alcoholism, practices he said derail them, urging them to instead focus on education and other skills that build them.

“We need you healthy. We must be sure the investments we have made are going to last,” he said, encouraging them to take up the opportunities at their disposal and avoid the bad things.