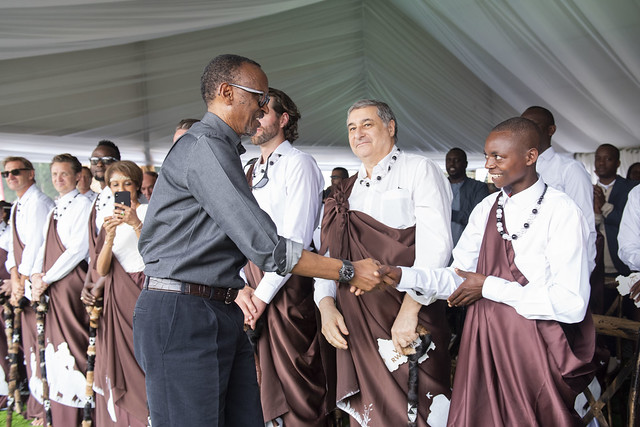 The price of celebrity can be other people’s resentment, or so Emmanuel Niringiyimana has come to discover.

Only a few months ago, twenty-three-year-old Emmanuel Niringiyimana was living a quiet life in his home village of Kakirinda, Nkoto cell; Murambi sector in Karongi District of Western Province.

He made a modest living keeping bees and augmented his income with whatever casual work he could pick up. The quietly spoken young man spoke to few people, bothered even fewer, and was bothered by almost none.

All that changed a couple of months or so ago. Sudden celebrity was thrust upon him. At the Kwita Izina ceremony, an annual Rwandan conservation event that has earned international renown, Niringiyimana joined British supermodel Naomi Campbell, Deputy Secretary-General of the United Nations Amina Mohammed, former Ethiopian Prime minister Hailemariam Desalegn, singer/songwriter superstar Ne-Yo, to shake hands with President Kagame, and name a newborn mountain Gorilla.

Observing his neighbours struggling with negotiating the overgrown dirt road used by all the village, one day, Niringiyimana took his hoe and cleared the most difficult part of the road.

That might have been that, but, for reasons he himself cannot fully explain, he returned the next day to clear another section, then another, and another, until, over time, he had constructed the best part of seven kilometres, all by himself, using nothing but, his trusted hoe. It was a herculean task. Rwanda is aptly named the land of a thousand hills. Many find simply walking from A to B arduous, let alone building a road up one of the famed hills.

Watching Niringiyimana at his self-imposed labours, many of his neighbours came to the conclusion that he was a bit touched.

That perhaps the sun had gone to his head and scrambled his mind. Soon, the media learned of this supposed mad man who had decided to attempt the seemingly impossible. He became an overnight social media sensation, and even greater celebrity was to follow.

The Rwanda Development Board (RDB), a government agency with the responsibility for tourism and conservation, invited him to join the stellar line up for Kwita Izina, making him a local celebrity, who is nationally recognised.

On his return home, he was accompanied by the Executive Secretary of his village. The post of Executive Secretary is unique to Rwanda. He or she is a technocrat, whose role is to work with elected politicians to empower them to implement the government’s vision.

Niriyingimana’s new status, his arrival in the village in an official car, did not sit well with local ne’er do wells, who are consistently up to no good, and preferred the quiet and anonymity of their village.

They threatened him, he would pay for bringing officialdom to the village with his life, they warned. He was rattled. By now, he had formed a WhatsApp group, which included local politicians and journalists. He posted his fears online.

Predictably, the journalists went into overdrive. Their newly minted star newsmaker was being threatened, which was a story in itself. Niriyingiyimana was the gift that kept giving to the media. He was quoted as saying that is neighbours had turned against him, envious of his new celebrity status, and that he was fleeing his village for his safety, to live in the capital Kigali.

As so often with such stories, the facts received scant attention, when they threatened to spoil a good story. When KT Press spoke to Niringiyimana, he was a little overwhelmed.

“There is absolutely no problem” he assured us, “everything is fine. The neighbours have never threatened me. In fact, they are really supportive, more than they were before.”

He had said to journalists that he had felt like fleeing his village to stay with relatives in Kigali, but, “I thought we were just having a conversation” he said, “I didn’t think they would go and write what they wrote.”

The Executive Secretary of Murambi, Phanuel Uwimana, became aware of the story only when he was tagged in a twitter conversation. He immediately involved the police and the local police support officers. A community meeting was convened, at which Niringiyimana was invited to speak.

His neighbours were horrified by the suggestion that they might do him harm. The meeting voted to arrange a special Umuganda – a monthly community self- help exercise, to help him extend the road which began it all, and changed his life.

“This is really a quiet, peaceful area,” assured Uwimana. “Emmanuel was threatened not by the community but by petty criminals from outside the area,”

“Emmanuel is a star here” he added. “I refer to him as an example to the community, especially the young people,” he said.

Uwimana suspects his local star was overwhelmed by his newfound fame and could have done with support and advice, in talking to the media especially.

“He is young, and he found himself in a situation that he could not manage. He feels reassured now, and everything is fine. Our approach is that anyone who has an issue can approach any official, at any level. Emmanuel has my number for instance, and as well as the normal police protection, he can call me whenever he feels the need.”

Niriyingimana himself feels somewhat chastened by his brush with fame and just wants to get on with his new life. Business tycoon Sina Gerard has provided him with modern beekeeping facilities, and he can now sell his honey in Sina’s many outlets.

Niringiyimana who did not complete primary school, also wants to explore opportunities to gain road-building skills. The ministry of infrastructure has already committed to working with him.

Whatever instinct drove him to begin building that road was more life-changing than he could ever have imagined.