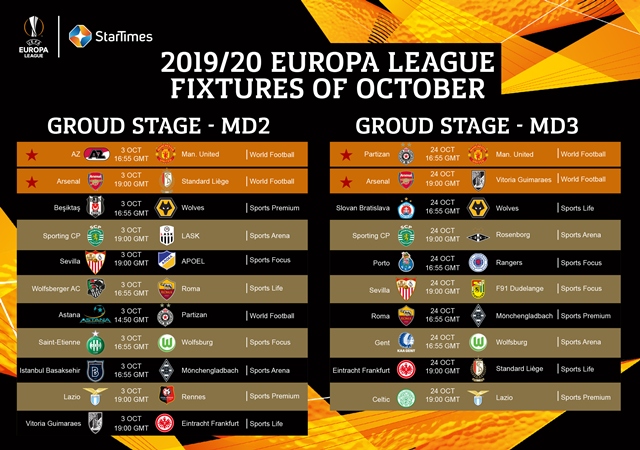 After getting their Europa League campaign off to a winning start, Premier League Giants Arsenal and Manchester United are keen to make that two victories in a row on Thursday on 3rd October 2019.

Despite fielding several players who barely feature in the Premier League, Arsenal outplayed Frankfurt in their opening Group F match and are now at home to Standard Liege, who also won their first game.

The Belgian club beat Vitoria Guimaraes 2-0 at home, but are expected to struggle against an Arsenal side who are hoping to – at least – repeat last season’s performance in the Europa League, when they went all the way to the final.

The Reds meanwhile, who are campaigning in Group L, have a short trip to Alkmaar for their second match.

Two-time Dutch champions AZ Alkmaar, who played in the UEFA Cup final in 1981, drew their opening game against Partizan Belgrade 2-2, but are favoured to be the team that will accompany United into the knock-out stages.

Former Manchester United and England midfielder Owen Hargreaves told television viewers that as the winners of the Europa League qualify for the Champions League the following season, this year’s competition is very important for both United and Arsenal.

“They’ve fallen behind Manchester City and Liverpool. The fact of the matter is that this competition I think for both teams is, in a way, must-win.

“I don’t see either of them (Manchester United and Arsenal) finishing in the top four the way they’re currently playing. So I think the best way to get in there is this competition.”

Wolverhampton Wanderers, who are the third Premier League club involved in the Europa League, are making a European comeback after 39 years. They had to enter the competition in the second qualifying round but managed to win six games in a row to advance to the group phase.

There, they found the going much tougher as they were beaten 1-0 at home by 2011 finalists Braga in their opening Group K match. Nuno Santo’s side is now away to Besiktas in a match neither side can afford to lose.

The Istanbul club gave away a 2-1 lead at Slovan Bratislava and was beaten with two injury-time goals 4-2.

As one of the premier football competitions in the world, the Europa League has attracted millions of fans throughout Africa and they do not need to miss out on the action, as the top matches are being shown live and exclusively on the Star Time football channels.

Make sure you stay on top of all the action by tuning in to your favourite team in the Europa League – brought to Africa live and exclusive by StarTimes.

Auf der Heyde played professionally for Bosmont Chelsea in the South African top-flight and now spends his time migrating between South Africa, Germany and the UK.