As the East African Community (EAC) gears up celebrations to mark twenty years of its rebirth on November 30, the regional bloc has launched a Citizens’ perception portal in which citizens will express feelings on how it has impacted them.

The one-year campaign launched this week, provides a platform to hear stories from every East African on the impact the EAC has made to his or her life and the future direction the citizens want the region to take.

“We target to hear stories and inspire young people’s participation in this campaign through a regional Youth Videos and Animations Competition which has a total prize of $25,000 for the innovative 30 winners,” Said Libèrat Mfumukeko – the Secretary-General of the East African Community.

The campaign, according to EAC officials, aims at inspiring East Africans to embrace the integration agenda.

In April this year, President Paul Kagame and the current Chairperson of the EAC said that the regional bloc ‘is in good health’ despite ongoing sour relations between Rwanda, Uganda and Burundi.

Last month, the President, in his capacity as the Chair of the East African Community, also represented the bloc where he participated in a Working Lunch with Russian President Vladimir Putin in Russia, together with other chairs of regional economic communities across Africa.

Meanwhile, as the EAC is set to celebrate 20 years on November 30 this year, its Secretary-General, Libèrat Mfumukeko, says the launched campaign targeted to reach out to over 10 million citizens during the period. The six-member bloc is home to 172 million citizens, of which over 22% is urban population. 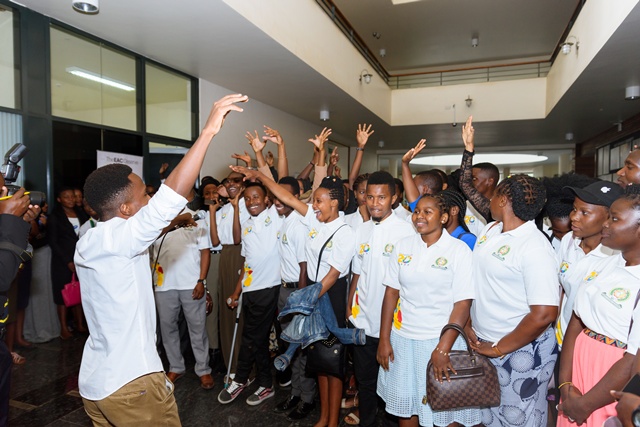 “The campaign dubbed The EAC I Deserve will hopefully ignite and sustain the enthusiasm and create a new momentum that will inspire each of us to play our part in the integration agenda,”Mfumukeko said.

One of the key pillars of EAC integration include Customs Union, Common Market; Monetary Union and Political Federation.

Through the Customs Union Protocol, trade within the EAC region has been enhanced significantly. However, in some instances, political and economic sabotage remains a stumbling bloc among some member states.

The EAC Partner States envisage coming together to form a super-state under a single political authority – a dream that could be brought back on the table as the bloc celebrates twenty years.

The East African Monetary Union Protocol is another pillar that provides for the attainment of a single currency for daily transactions within the Common Market, while EAC guides the free movement of goods, people, labour, services and capital from one Partner State to another as well as the rights of establishment and residence without restrictions under the Common Market.

Currently, EAC citizens can carry their national IDs to travel to Rwanda, Uganda and Kenya – following the launch of the use of IDs by Heads of State in 2014.

In February 2014, President Paul Kagame was seen presenting his National Identity Card (Indangamuntu) for immigration formalities at Kigali International Airport, before heading to Uganda’s capital Kampala for a regional summit.

On arrival at Entebbe International Airport in Uganda, the two Presidents presented their IDs and the coupons and subsequently received an entry visa into Uganda.

Ahead of the 20 years celebrations of EAC, Secretary General Mfumukeko explained at the launch of the regional Citizen’s Engagement Campaign at the EAC headquarters in Arusha, Tanzania that the campaign will be part of several activities planned for commemorating events.

The EAC founding partner states, namely Kenya, Tanzania and Uganda, signed the treaty for the establishment of the bloc on November 30, 1999.

The EAC now boasts having three more partner states of Burundi, Rwanda and South Sudan with Somalia, Sudan and Democratic Republic of Congo showing keen interest in joining the bloc.

The work of the EAC is guided by its Treaty which established the Community, that fully entered into force on 7 July 2000 following its ratification by the original three Partner States.