President Paul Kagame has said that Rwanda and Qatar have created a healthy relationship and the two countries are working on several things in the area of investment that will benefit both sides.

On October 28, President Paul Kagame was in Doha – the capital city of the State of Qatar to attend the Qatar Information Technology Conference and Exhibition hosted by the Qatar Ministry of Transport and Communication, under the patronage of His Highness Sheikh Tamim Bin Hamad, the Emir of Qatar.

While in Qatar the two Heads of State witnessed the signing of several agreements.

Speaking to members of local and international media during a press conference today at his Village Urugwiro office in the capital Kigali on Friday, November 8, Kagame said that the investment projects underway between the two countries are in the sectors of tourism, agriculture and many others.

“Yes we have a good relationship and partnership with Qatar and around that, we are working on several things in the area of investment that is going to serve well Rwanda and Qatar,” Kagame said while responding to KT Press’ inquiry on the outcome of the recent agreements signed.

“One of them is the partnership around the airport, around the airline…other things in Agriculture, hospitality and tourism sector and many things,” Kagame said. 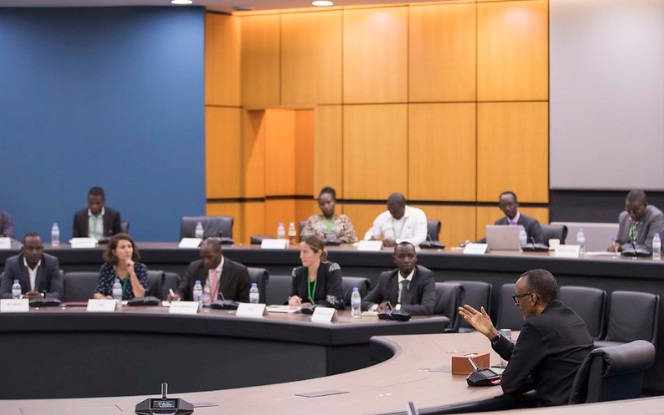 The Head of State said that officials from both countries are jointly working to ensure the right investments are executed.

“Our people have been working together to shape it in a way that we can expedite things. We can make the right investments that will give us all good returns and the movement of people have been sorted out. So it is a healthy partnership that we are continuing to develop,” the President said referring to the Visa-free agreement signed between the two countries.

According to the signed agreement, citizens of Rwanda can be granted a visa waiver for a period of 30 days on their arrival in the State of Qatar, on conditions that the passenger’s passport must be valid for at least 6 months, the passenger must have a confirmed return ticket and they should provide a confirmed hotel reservation.

During his three-day State Visit, President Kagame took the Emir of Qatar on the rooftops of Kigali’s skyline – showing him the magnificent view of the capital city at night, before flying to Akagera National Park in the Eastern part of the country to visit the list of ‘Big Five’; Lion, Elephant, Buffalo, Leopard and Rhinos.

The two leaders, together with their respective delegations, held bilateral talks on furthering areas of economic cooperation between the two nations.

They also witnessed the signing of three bilateral agreements; Agreement on Air Services, Agreement on the Reciprocal Promotion and Protection of Investments and a Memorandum of Understanding on Economic, Commercial, and Technical Cooperation.