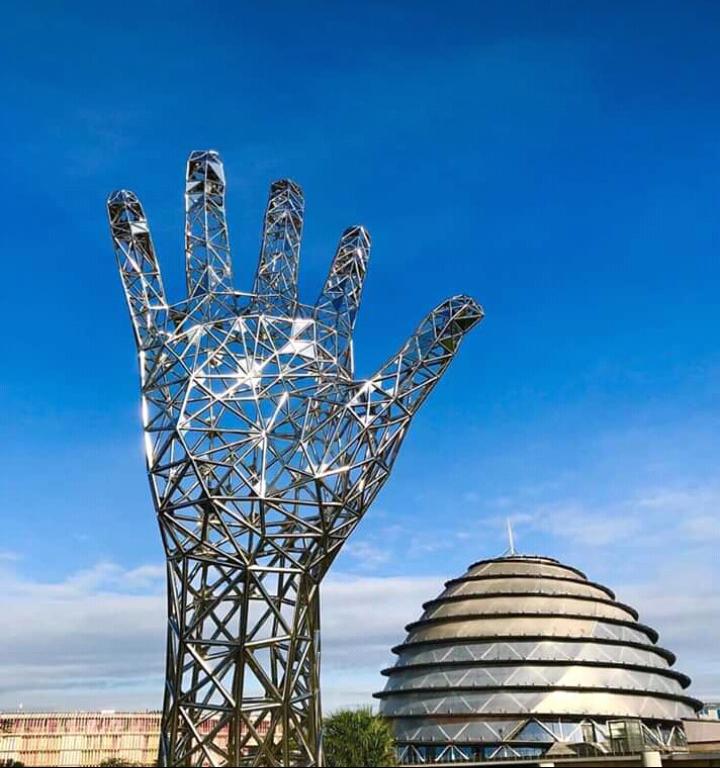 It drew a lot of speculation, many linked it to the just concluded 20th International Conference on AIDS and Sexually Transmitted Infections in Africa (ICASA), some going as far as claiming that the steel palm is a symbol that says ‘no to HIV/AIDS’ while others simply posted the new sculpture in town for aesthetic reasons.

Little however has been said about its background, what it stands for and who is behind the artistic feature that has been added onto Rwanda’s iconic art pieces.

Few people tried to explain the background of the sculpture which has been put together for a couple of weeks but now details of what it is all about and what it symbolises have emerged.

Today, December 9, Rwanda is hosting the International Anti-Corruption Excellence Award under the auspices of the Emir of Qatar and friend of Rwanda Sheikh Tamim bin Hamad al-Thani. President Paul Kagame will grace the occasion which will be attended by the Emir himself.

According to the Gulf Times, the steel artwork which will be unveiled by the Qatari leader and President Kagame was designed by Doha-based Iraqi contemporary artist and sculptor Ahmed Albahrani.

It represents transparency and the vision of the Emir of Qatar towards fighting corruption and each part of the steel masterpiece was engineered in a way to represent every country of the world.

“The sculpture represents transparency via the triangles found in it with the engineering formations,”

“Every part of this hand is a nation of the world, which means that the whole world must fight this disease (corruption) that has destroyed thousands of people and many big countries. In short, the work was a translation of the vision of His Highness the Amir and the directions of HE Dr Ali bin Fetais al-Marri,” Albahrani told the Gulf Times. 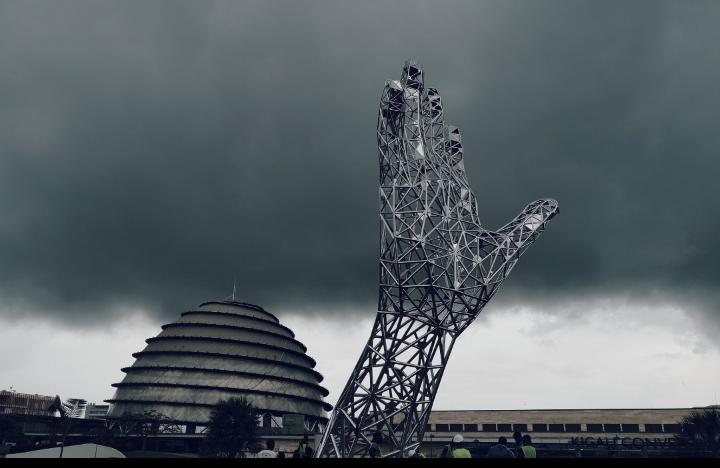 The imposing steel hand, made out of strong metal bars artistically weaved together to form a big palm with all five fingers stretched out into the sky, has become the new selfie-inducing feature of Kigali, perfectly juxtaposed with the iconic KCC dome.

Albahrani, who has been living in Qatar since 1999, was born in Tuarej on the Euphrates River, near Babel in Iraq in 1965 and has been behind many landmark projects in the oil and gas rich tiny Middle Eastern country.

He is known for iconic abstract, contemporary or conceptual art works which carry a positive message and touch issues of modern day life.

Having lived in exile for many years, Albahrani uses his work to express the sense that he is “estranged from his geographical foundation and his roots.”

He has designed a collection of statues, monuments and murals in Baghdad and different cities across the world. His most notable works include Green Art, Dubai, Bisan Hall by the French Cultural Centre in Qatar as well as Olympic Rings at Khalifa International Stadium in Doha. 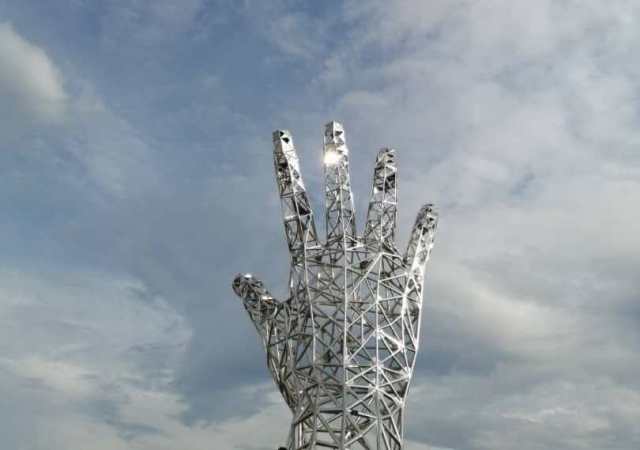 He has done sculptures in Bayfront Park, Miami, Florida including sculptures of Charlie Chaplin, Mother Theresa and Michael Jackson, a monument of Abu Tahsin al-Salhi and the Cube, a popular feature at Hamad International Airport, Doha which carries a message of peace.

His most recent work include the design of the 24th Arabian Gulf Cup trophy, which was won by Bahrain for the first time on Sunday, in Doha,  after defeating Saudi Arabia 1-0.

“For me, in terms of reputation, popularity, and presence, the Arab Gulf Cup trophy is very important but working on this international award is something that any artist in the world can be proud of. However, for me as an artist the most important work has not been done yet.”

Albahrani was chosen to be a part of the International Anti-Corruption Excellence Award because of the outstanding body of work he has produced in the region.

The 4th edition of the Sheikh Tamim Bin Hamad Al Thani International Anti-Corruption Excellence Award will take place today in Kigali with the support of the Government of Rwanda and the United Nations Office on Drugs and Crime (UNODC).

The purpose of the award is to celebrate the most effective and courageous members of the anti-corruption community.

The annual Sheikh Tamim Bin Hamad Al Thani International Anti-Corruption Excellence Award is being held for the first time on the African continent this year.

It will be presented to nominees who have demonstrated a willingness to fight systemic corruption and champion the message of anti-corruption among the people of the regions in which they operate.

According to the Minister of Justice and Attorney General Johnston Busingye, Rwanda was chosen to host the ceremony because of the reputation President Kagame has built in fighting corruption over the last 25 years.