It is never too late for one to be a successful entrepreneur but it is rather how one looks at whatever they do with an entrepreneurship mindset and making it their responsibility to see it succeed.

This was President Paul Kagame advice to young people on Saturday during a townhall meeting with young entrepreneurs at Kigali Serena Hotel – a session he attended with the First Lady Mrs Jeannette Kagame on the invitation of Zimbabwean businessman and philanthropist Strive Masiyiwa.

Though he said it is a bit too late for him to become an entrepreneur, President Kagame said that his choice was to pursue what he does with a mindset of an entrepreneur and in trying to find ways of being one, he ventured into politics of entrepreneurship, building on his other responsibility as a leader.

“I’m trying to find ways of being one even at the wrong time but building on my other responsibilities. I am now in politics so I have tried to make it the politics of entrepreneurship,”

“Meaning that for those ideas that I have, I try to find ways of channelling them through politics to reach the young people many of whom are here, doing different things and also really use politics to create that environment so that young entrepreneurs can have an environment where they are enable to do a number of things,”

“For the young people, the advice is, as we grow up, every year we come to understand better the world we are in, as we find it. But here is also the world every person would want it to be. Starting with himself, people around them, family friends and society as a whole.

“For young people therefore, as you keep growing and expanding your understanding of the world, and try to make a contribution to the shaping of this world you are in, there are choices and investments you make and there are things you expect as outcomes,” he said. 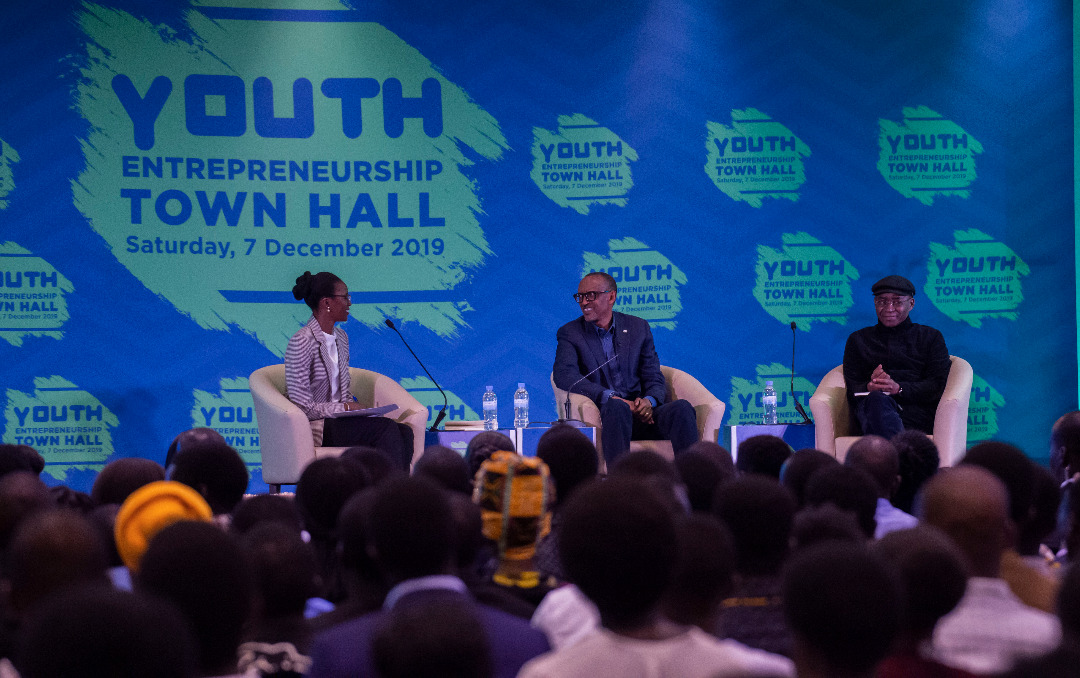 On his part, he said that his job is to tell all the young people out there that they have everything in themselves and around themselves they need to become good entrepreneurs and they should tap into it to grow themselves and the societies they are part of, that is Africa and Rwanda.

President Kagame gave an example of the two young women entrepreneurs Kevine Kagirimpundu, the co-founder of Uzuri K&Y and Christelle Kwizera who spoke during the townhall meeting, saying that they are an example of how their mindset was focused on entrepreneurship and they have made it.

In an era where people copy ideas, he told young people in the house that they don’t have to do copy what Kagirimundu or Kwizera are doing.

Kagirimpundu is the co-founded Uzuri K&Y, a local startup which started making shoes in 2013 using recycled materials and old shoes while Kwizera is the founder of Water Access Rwanda, a Rwandan startup that provides water access to rural areas.

The duo told the audience about how they came up with their ideas, started small and today they are considered some of the best entrepreneurship ideas that are greatly transforming the society, employing many young people and solving problems while contributing to development.

“We all learned many things from the two young people who spoke before us. Kevine and Christelle are telling us that you can do it. You don’t have to do what they’re doing but you can do different things with the same kind of mindset and spirit with which they’re doing it,”

“That is the advice I can give young people and again it’s also not about just them as individuals but the wider society around them and as a country. We can all make a difference in solving one problem or the other,” he said, adding that in doing so, people around it benefit in terms of employment and using the service.

“Christelle was telling us about providing water. Water is all over the place but people don’t access it, or there is where water is seemingly lacking but ideas can show people where water is and make it available so that more people access it,” he said.

President Kagame said that he hope many young people in room were inspired by Kagirimpundu and Kwizera’s story, adding that “Young people must learn to try” and show up and make it count.

The Head of State said that the government on its part will continue to put in place the environment and means for young people to whip up their entrepreneurial skills, including access to education to as many young people as possible and should build on it.

“What we are doing is making sure that education is available to as many young people as possible. That’s what we have to do, build on that and then the sky is no longer the limit,”

“Education and all that has been mentioned are very important. They’re the foundation. Once you have done that, create that environment that brings the young people to discuss not only problems but how to solve them. That discussion is very important,” he said.

On his part, Masiyiwa, who last month was a judge at the Africa Netpreneur Prize in Ghana, described Rwanda as a true startup nation, saying that the argument can be confirmed by the fact that Kagirimpundu and Kwizera emerged among the top 10 African startups in the competition supported by Alibaba found Jack Ma.

“As a judge I had no idea who the top 10 were he said,” adding that his file arrived 2 days before here headed to Accra and “bang, out of the 10, two were Rwandan women” in the competitive pitch where the winners would share $1m from the Chinese businessman and philanthropist.

“Just think of it statistically. I am sorry South Africa didn’t make, Kenya is aggressive in this space, they didn’t make it this time. Nigeria, you expect a lot of numbers. They are afterall 200 million Nigerians,”

“But there were two Rwandese women entrepreneurs and as I reflected on this, I said I am not surprised. Actually I was not surprised because you know when I did a similar event two years ago, which I funded, the go-getters prize, we had finalists’ women from Rwanda,” 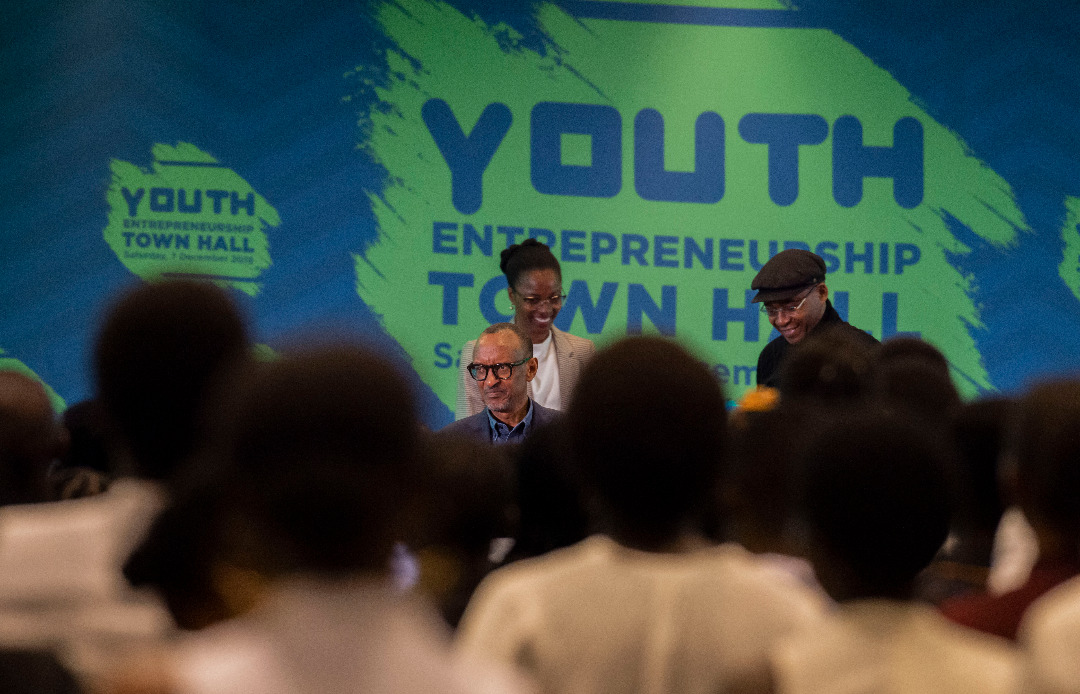 Masiyiwa said that in Accra, Kwizera stood before himself and Jack Ma, the entire audience and talked the numbers of her business and she emerged, pointing out that this is a reflection of policy on one hand, adding that President Kagame has been at the forefront of building a generation of young people who aspire to be something.

“You have inspired a generation of women entreprenuers who are absolutely remarkable,” Masiyiwa told President Kagame, pointing out that this is also reflected in everything else Rwanda does and the policies it pursues, citing women in parliament and in cabinet as an example.

Reflecting on Kagirimpundu’s entrepreneurial journey of making shoes out of recycled tires, Masiyiwa said Nike, a $60bn apparel company, started just like she started, adding that if a 25 old can employ 65 people now, then one has to reflect on where she will be in a few years.

He said that the biggest problem is that Africans look at the big companies as giants but don’t reflect on how they started. He told young people that they should always remember that all the giants started small.

Masiyiwa also talked about Kwizera’s startup as one of those startups he has been telling young people to do –coming up with ideas that address rural problems as Kwizera has done, instead of running to cities –because entrepreneurship is all about that.

The businessman said that if President Kagame can have 100 Kwizeras and 100 Kagirimpundus, there won’t be a problem of unemployment and that is what it should be –putting in place policies that produce more Kagirimpundus and Kwizeras.

During the entrepreneurship town hall initiated by Masiyiwa himself, young people asked questions and exchanged ideas in an evening of interaction.

President Kagame challenged young people to stand up and pursue their ideas and not sit back and imagine that things will be delivered to them, promising however that the government will continue to do whatever it takes to create a conducive atmosphere for them to put their ideas into action.