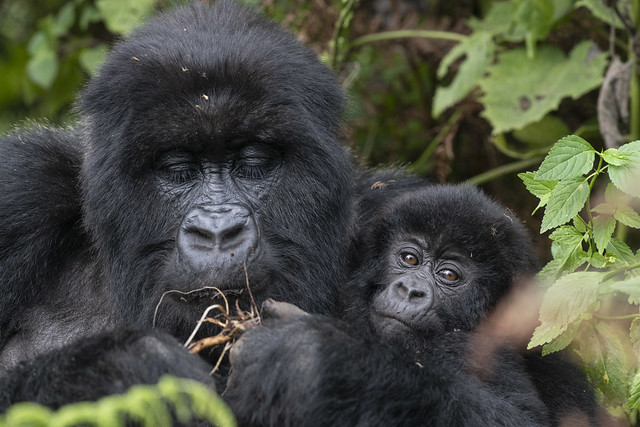 Kwita izina 2019. Mothers taking care of a baby gorilla to be named next month.
The baby emanates from Ntambara Group

The population of mountain gorillas, one of the world’s most endangered species has increased to 1063, according to the new survey from Greater Virunga transboundary collaboration.

The survey indicates that Gorillas from Bwindi impenetrable forest in Uganda and Sarambwe reserve in Democratic Republic of Congo increased from 400 to 459.

In Rwanda, the number of gorillas was increased to 604 from 480 last year in Virunga mountain Range of Rwanda to make a total population of 1063 Gorillas.

The survey was facilitated by Dian Fossey fund, an organization which oversees gorilla protection activities in the region and was published on Monday 16.

Dr. Tara Stoinski, chief scientific officer of the Fossey Fund said  “today’s census results are a testament to the intensive of  ground conservation efforts by dedicated trackers, researchers and other team members across the three Governments including Rwanda, DRC and Uganda.”

He further said; “Mountain Gorillas are one the most protected species on the planet, and today we see what concerted efforts by multiple stake holders can do to reserve a seemingly hopeless situation. It is hard work by community members, government leaders and conservationists, but it can be done.”

In the previous mountain gorilla census, survey teams walked prearranged investigation trails covering all areas of the forest, searching for gorillas and other mammals as well as signs of human activity.

In their activity, teams collected fecal samples for genetic analysis at nest sites, the process was completed twice, from March to May 2018 and from October to December 2018 to ensure no gorillas went undetected.

The team of researchers collected feces at the Gorillas nests for genetic evaluation and other information.

Last year, Rwanda Development Board (RDB) expanded conservation land from 16,000 to 16,027 hectares in the Volcanoes National Park in Northern Rwanda in efforts to promote conservation.

The Ben on Knees Praying to Fill up Kigali Arena

Rwandan Farmers to Go Digital in 2020