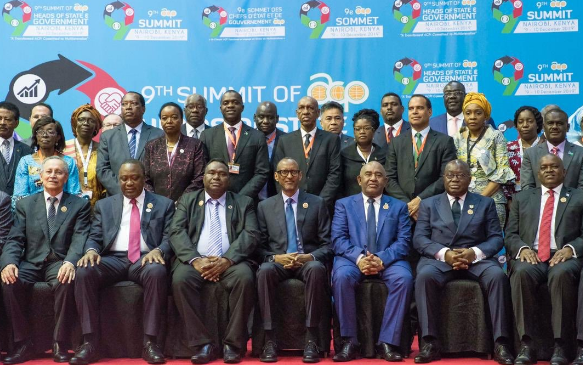 Rwanda’s President Paul Kagame is Kenya’s capital Nairobi, where he attended the 9th African, Caribbean and Pacific (ACP) Summit of Heads of State and Government.

The Summit is themed “A Transformed ACP: Committed to Multilateralism”.

The African, Caribbean and Pacific Group of States (ACP) is an organization created by the Georgetown Agreement in 1975.

The ACP Group’s main goals centre around the sustainable development of its Member-States and their gradual integration into the global economy; coordination of the activities of the ACP Group in the framework of the implementation of the ACP-EU Partnership Agreements; consolidation of unity and solidarity among ACP States and establishing and consolidating peace and stability in a free and democratic society.

Today’s summit in Nairobi was preceded by Ministerial Sessions from 6 to 8. The Summit comes at an auspicious time for the ACP Group as it prepares to finalise the Post-Cotonou negotiations as well as the revision to its Constitutive Act, the Georgetown Agreement.

In a statement released ahead of this year’s summit, ACP Secretary-General, Dr Patrick I. Gomes said the summit draws “A decisive opportunity to secure the ACP leadership’s endorsement, in principle, of the Post-Cotonou Agreement, with a view to its signing in early 2020.”

ACP Summits take place on average, every three years in an ACP Member State. They give ACP leaders from the 79-member ACP Group an opportunity to review the major developments of interest and concern to its members on the international scene in general, and in ACP States in particular.

Today’s summit will enable leaders to define the main orientations of the ACP Group’s general policy for the coming years and provide the Council of Ministers with appropriate directives for its implementation.

In addition, the Summit will take stock of the Group’s cooperation with the European Union – its key development partner.

The first ACP Summit of Heads of State and Government was held in Libreville, Gabon, on 6 and 7 November 1997, during which the ACP Leaders undertook to meet on a regular basis.