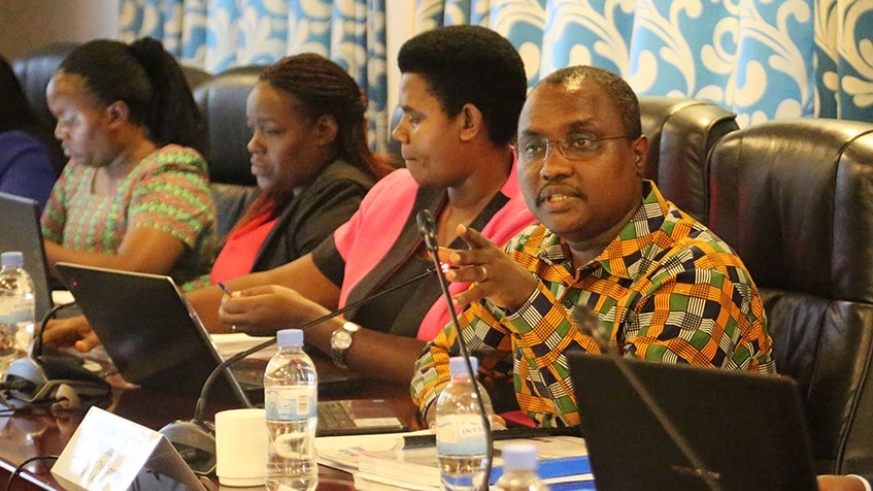 Chrysostom Ngabitsinze(Right) PAC president and committee members in a hearing

Rwanda Parliament has a lot to remember in the year that we have just concluded.

The forth parliament – lower chamber started its official plenary session on October 5th in 2018, and last year, it was still gathering strength to go deep into legislation substances.

However, after its first year, the public witnessed consistence and capability of the 4th parliament to challenge officials in term of accountability.

The elected MPs replaced some of the outspoken and tough personalities in the previous August House, like MP Juvenal Nkusi- also former Chairperson of the Public Accounts Committee (PAC). In the current house, Nkusi was replaced by  Jean Chrysostome Ngabitsinze as PAC chairperson.

Ngabitsinze will be remembered as a person who attempted to step in the foot of his predecessor, turned tables around especially on accountability of public funds.

Inside PAC last year, Ngabitsinze and his team of nine MPs grilled public officials including ministers and director generals of public enterprises.

For instance, in September, two officials of Rwanda Education Board (REB) were thrown out of PAC hearing for telling lies in front of the committee’s public hearing.

The two officials include Anita Batamuliza, REB acting procurement officer- who in front of PAC denied knowledge on a tender for procuring cows only to be pinned by a colleague and Seth Buhigiro, director of school connectivity- who kept silent when a probe was made on his department.

PAC’s probe also unveiled a school construction tender scam in REB where it was unearthed that the institution ‘offered a tender on an empty promise’ by the bidder who had no line of credit but had promised to get it-against tendering requirements which necessitate one to have it first.

Unlike in the past eight years when government officials could get away with such shameful performance, last year’s hearings had a new twist.

Some district officials who appeared before PAC failed to explain their financial decisions and with the power of the parliament recommendations on administrative action, some were forced to resign from duties.

For instance, in September, Fortunée Uwimana, a former Executive Secretary of Ruhango district was the first victim after her office couldn’t explain a failed construction of a proposed district youth center (worth Rwf184million) and accommodation facilities (worth Rwf601million).

Her drop out was also followed by resignation of others such as four Sector Executive Secretaries (ES) in Nyamasheke district (western province), Eric Munezero Head of Human Resources Karongi district also threw in their towels.

This was preceded by a wave of district Mayors resignations.

While more action was happening in securitizing officials, in April 2019 parliament MP Dr. Frank Habineza suggested the Auditor General Be Given Prosecution Power as part of a move to act on rogue officials who intentionally steal public funds through fraudulent tenders procedures.

The idea came in April during a seating of both chambers of deputies and Senate in which the 2018 OAG report showed that despite action on misuse of government funds, more expensive equipment of unimplemented projects lie idle and expenditures remain unaccounted for by officials.

Legally, the OAG and PAC cannot prosecute officials but can recommend such action to the office of the Ombudsman and National Prosecutor General.

However, this option left a hand-ful of government officials charged with cases of corruption and embezzlement while others had their property confiscated in a process of recovering lost funds.

Of the Rwf260 billion was mismanaged in Fiscal Year 2015/16, at least 999 government officials have been prosecuted with help of PAC in the last five year.

On the other hand, MPs opted that in the meantime it’s important to government has to focus on finding the root cause of the failures in public accountability.

When it seemed like the No-Nonsense Legislator Juvenal Nkusi had gone into retirement, the 64 year old lawmaker bounced back in the legislative domain, this time to the senate, following his nomination by the National Consultative Forum of Political Organisations (NFPO).

Nkusi was one of the two candidates, together with Salama Uwamurera, of Ideal Democratic Party (PDI).

When all seemed ripe for both nominees sent in by political parties, the Supreme Court rejected the nomination of Uwamurera citing lack of experience in governance and leadership as one of the reasons.

This compelled PDI to go for Hadidja Murangwa Ndangiza, as its new candidate, who was also subsequently confirmed as a right candidate to serve a five (5) year term, renewable once, among other 26 new senators elected this year.

Though much action has not been seen in the Senate, as the team learns modalities and functions of the senate, they managed to approve at least five presidential appointees in public office, soon after they assumed duties in October.

Inside the chambers of deputies, the plenary sessions bore good fruits passing major bills like the Amended Electoral Bill (in July), approved the Rwanda Medical Supply Company (in May) and with no doubt banned the use of Single Use Plastics adding to the previous ban of plastic bags.

This year cannot end without remembering two things. That for the first time in 25 years the Rwanda Parliament building in Kimihurura sector was given a glowing shinny whitish color painting that can be viewed from all angles of Kigali city.

Though it started as a one man petition in April 2018, when Frank Shumbusho asked parliament to change the law on using manual cars to allowing use of automatic cars in driving permit tests, this year saw the fruits of parliament pushing the idea till Rwanda Police finally said Yes- and of course 2020 tests will start on this footage.

Kagame Promises Affordable Internet for All