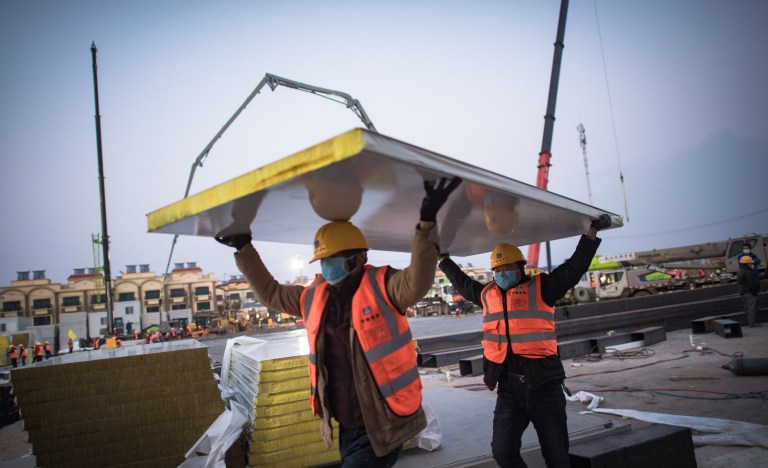 Construction of 1000 bed Coronavirus hospital in the Hubei Province was completed in 10 days. Rwanda has expressed solidarity with China over the Coronavirus disease

Rwanda says it stands with China following the outbreak of the new Coronavirus which has been declared by the World Health Organisation (WHO) as a global public health emergency.

The Minister of Foreign Affairs and International Cooperation, Dr Vincent Biruta met the Chinese Ambassador to Rwanda, Rao Hongwei, to express the country’s solidarity with the people and Government of China in the wake of the outbreak which has so far claimed at least 213 people and affecting nearly 10, 000.

“We have expressed our appreciation to China on their handling of the coronavirus outbreak and their support to foreign nationals including Rwandans living in Hubei Province,” Dr. Biruta said.

“We remain confident in China’s ability to manage this outbreak and contribution to a coordinated global mechanism,” Dr Biruta said.

Minister Biruta thanked the Ambassador for support and provision of food and basic necessities given to the 155 Rwandans living in Hubei province, by the local authorities in collaboration with the Embassy of Rwanda in Beijing.

A government statement said Rwanda continues to monitor the outbreak in partnership with China, the World Health Organization, and other stakeholders.

Earlier on Friday, the national carrier RwandAir said it had suspended flights to and from the Chinese city of Guangzhou following the declaration of the Coronavirus outbreak as global public health emergency.

The airline in a statement on Friday said flights to the Asian country will be temporarily suspended until further notice.

The airline said affected passengers will be re-routed, refunded or allowed to change their tickets to a later date but flights between Kigali and Mumbai remain operational.

The RwandAir CEO Yvonne Manzi Makolo said the airline will continue to monitor the situation and issue updates on when it will resume flights to the third largest city in China.

China is one of Rwanda’s biggest trading partners, with imports from China growing at 13 percent annually, amounting to approximately $400 million annually. Rwanda’s exports to China have been growing steadily by 11 percent annually.

WHO declared the coronavirus a global emergency on Thursday as the outbreak of the virus continues to spread outside China.

Dr Tedros said that the world body is concerned that the epidemic could cause more damage if the virus spreads to countries with weaker healthcare system. The U.S has warned citizens against traveling to China.