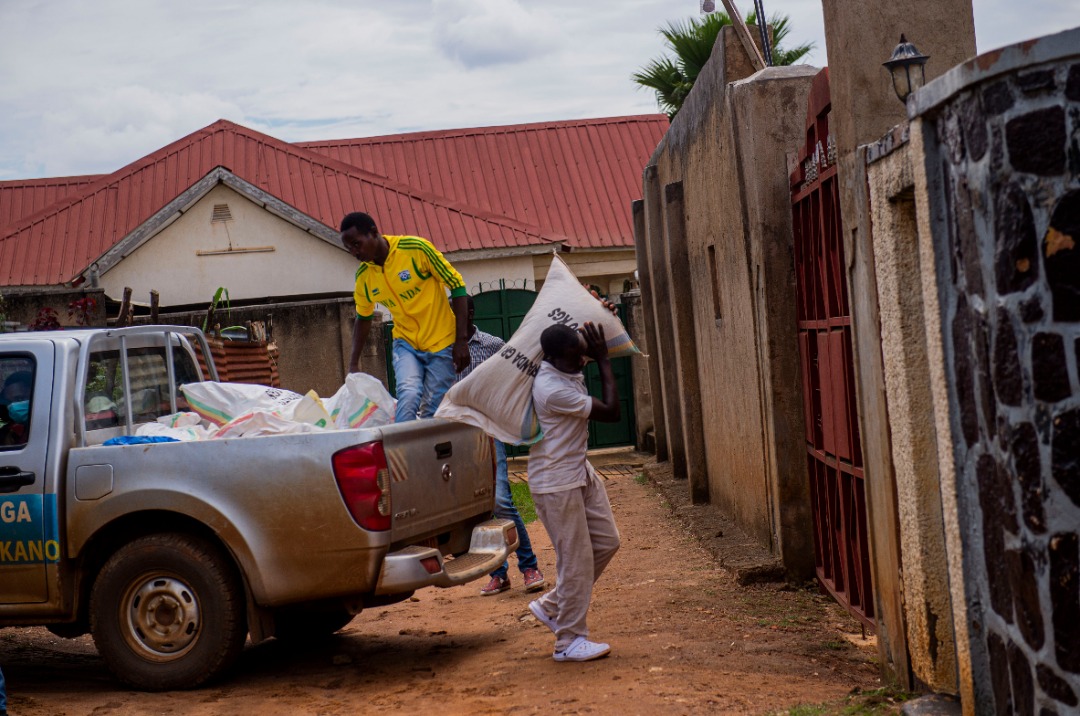 The Government of Rwanda on Saturday started the distribution of the first batch of relief items to about 20, 000 households in the City of Kigali as part of efforts to sustain people during the Novel Coronavirus lockdown following President Paul Kagame’s directive on Friday.

The Head of State in the national address said that the Government will continue to do everything possible, to support Rwandans through this challenging time.

“We know that this is not an easy period for most Rwandans, whose livelihoods have been interrupted across the country,”

“The Government will continue to do everything possible, to support Rwandans through this challenging time,” President Kagame said, urging people to be more patient as the country works to rein in the virus. 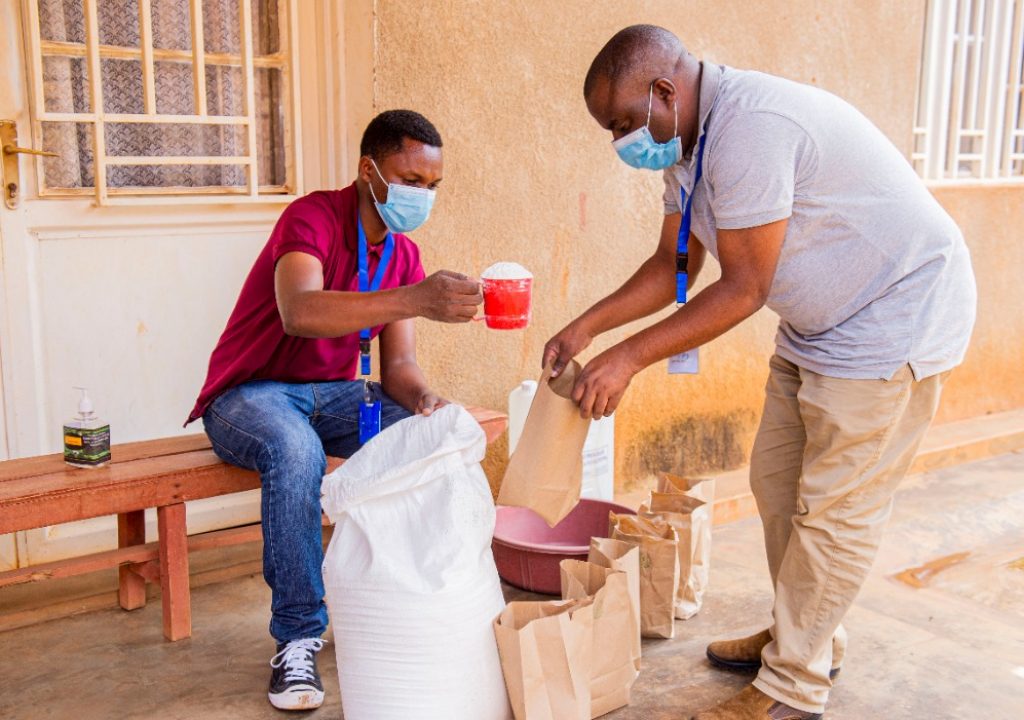 The exercise to distribute foodstuffs and other essential items kicked off in Kigali and is expected to continue to other secondary cities, 14 days after the first patient of COVID-19 was diagnosed in Rwanda leading to a countrywide lockdown and closure of borders to contain the spread.

The exercise which was led by local leaders at the cell and village level, saw 7,734 vulnerable households in Gasabo district receive items including rice, spaghetti, maize flour, beans, soap, cooking oil, porridge flour and other items to support families which were living hand to mouth.

Nyarugenge district had the highest number of households which received support, totalling to 11, 895 while 5, 271 households in Kicukiro district were supported as part of the efforts to keep them resilient in the lockdown. 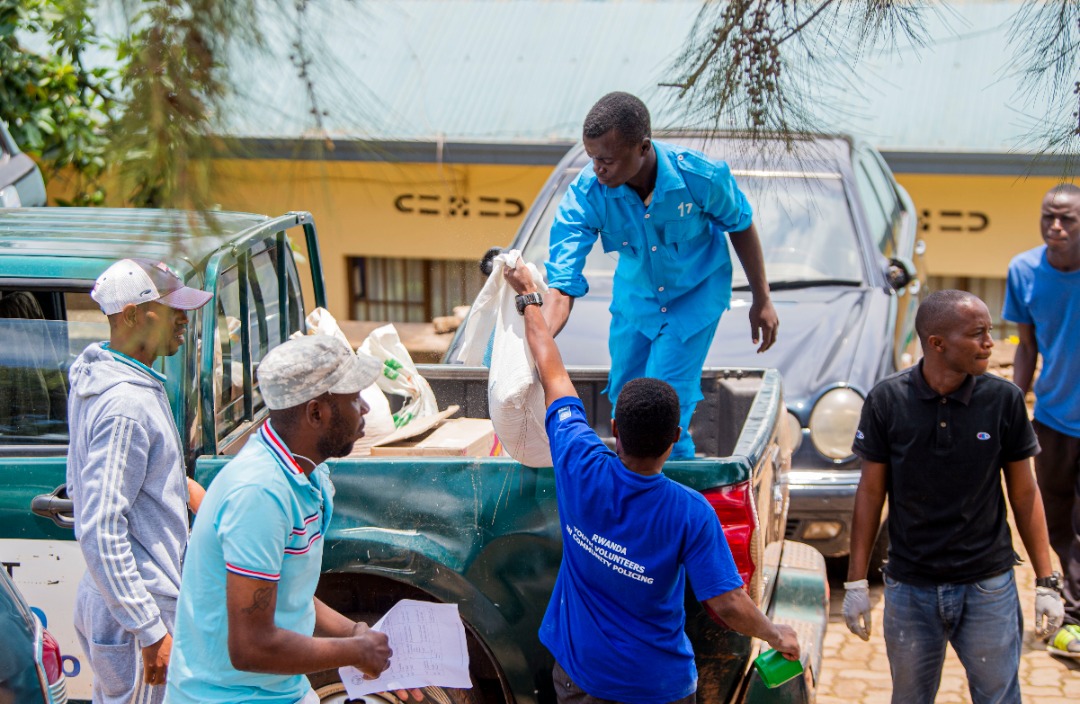 According to the Minister of Local Government Prof. Anastase Shyaka, the people who receive the support are identified through local committees at the sector, cell and village local government levels, with the distribution done in a well organised manner.

“We will distribute the items door-to-door, while observing the measures put in place to stop the spread of the Coronavirus. This will be done in an organised manner where local leaders at the lowest grassroots unit help to identify the most vulnerable households,”

“All other forms of support, including that of fellow citizens or groups will be channelled through local government units to avoid chaos. All support must be recorded by local leaders,” Prof. Shyaka said in reference to other efforts by different people or groups that offered to complement government efforts.

Minister Shyaka said that government will continue to offer support to vulnerable households through already existing social protection programs such as Vision Umurenge Program (VUP) alongside other current initiatives to sustain families in this period. 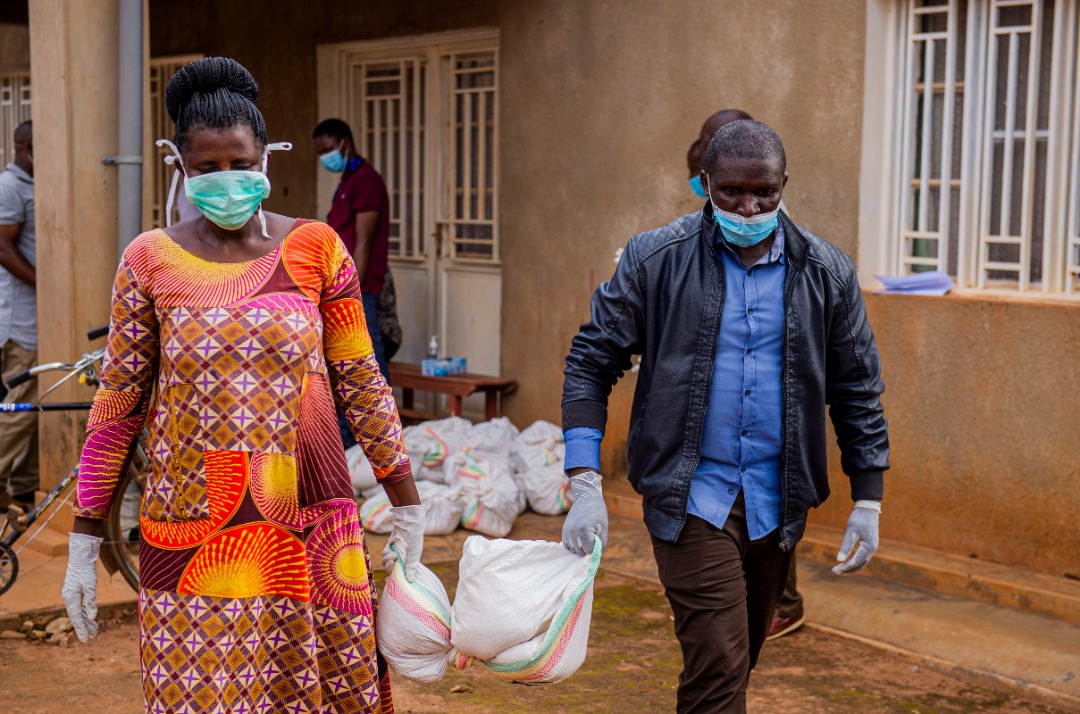 He said that different people, companies or organisations which want to support government efforts will channel their support through local government organs. 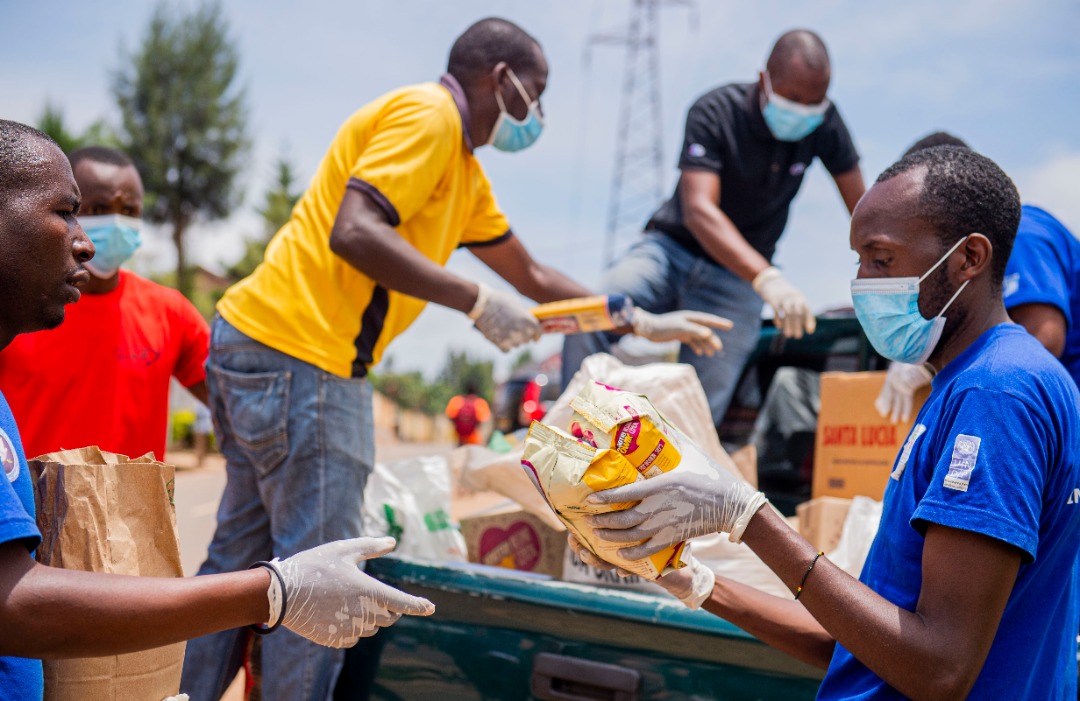 It was all smiles for the beneficiaries most of whom said they were running out of supplies and the government support was timely.

“I was a moto rider and earned a living by transporting passengers. With the lockdown to stop Coronavirus, I have been struggling to feed my family. Today I received rice, flour, spaghetti, cereal flour for porridge and other basic needs for my family,” said Jean Claude Ndayishimiye, a resident of Gisozi sector.

According to Costante Nshimiyimana a resident of Gatega, in Kicukiro district, the foodstuffs and other items they received will be able to sustain them for the remaining period of the lockdown until they resume work.

“My work is transporting people and goods on a bicycle. I have been struggling to eat with my family since the Coronavirus measures were taken but this support from government will push us till the restrictions on work and movement are lifted,”

“Now I can stay home, not worrying about what to eat or going out to expose myself. These items will push us till the situation goes back to normal and we resume work. We want to thank our government for this initiative,” he said.

Chantal Uwamwiza, the Executive Secretary of Rwezamenyo Sector, said that the sector has 625 households, and out of those, 144 were found to be vulnerable and were assigned support.

“So far we have distributed support in 135 households, the remaining 9 will also receive the support. We want to make sure that people don’t become desperate and go out to risk their lives to get what to eat,” she said.

According to Emmy Ngabonziza, the Nyarugenge District Executive Administrator, beneficiaries were selected based on the information provided by ‘Isibo’ leaders who submit information to the cell, which in turn shares the information with the sector to determine the most vulnerable households. 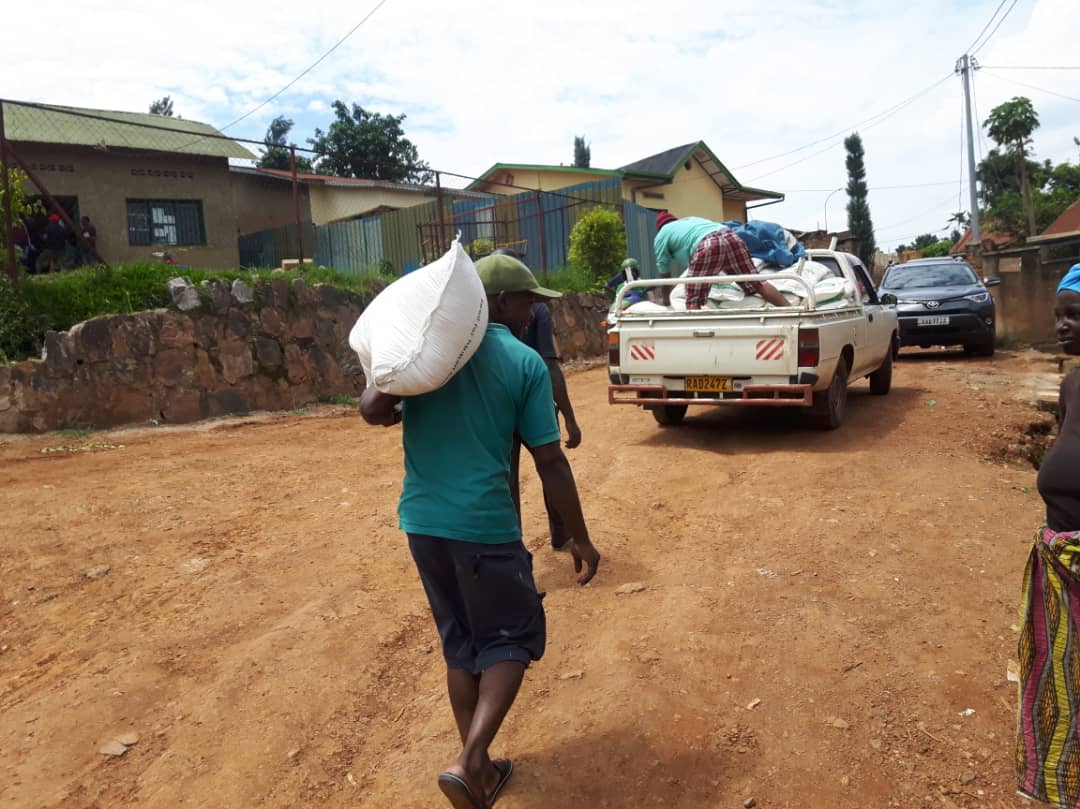 After determining the households, using district and sector vehicles, leaders move door to door, distributing the food items and other essentials, to avoid crowds and possible exposure of the people to Coronavirus.

Felix Havugimana, a local leader in Gatenga Cell, Gatenga Sector in Kicukiro district said that majority of the beneficiaries are people who were eating as they worked, mainly those in low paying jobs that depended on the activities in the Central Business District all of which came to a halt.

The Gasabo District Executive Administrator, Pauline Umwari said that the distribution of support will continue until the government lifts the restrictions that were out in place to avert the spread of the virus which has so far seen 60 people test positive.

“We will continue to identify them and support them. We don’t want any of our citizens to struggle to feed their families in this situation. This is a decision which was taken by the government to protect citizens as they stay home under the lockdown,”

“The beneficiaries are people who were mainly living hand to mouth. The exercise will continue until everyone in need is supported. We encourage people to use this support rationally as we do not know when this pandemic will be reined in,” Umwari said. 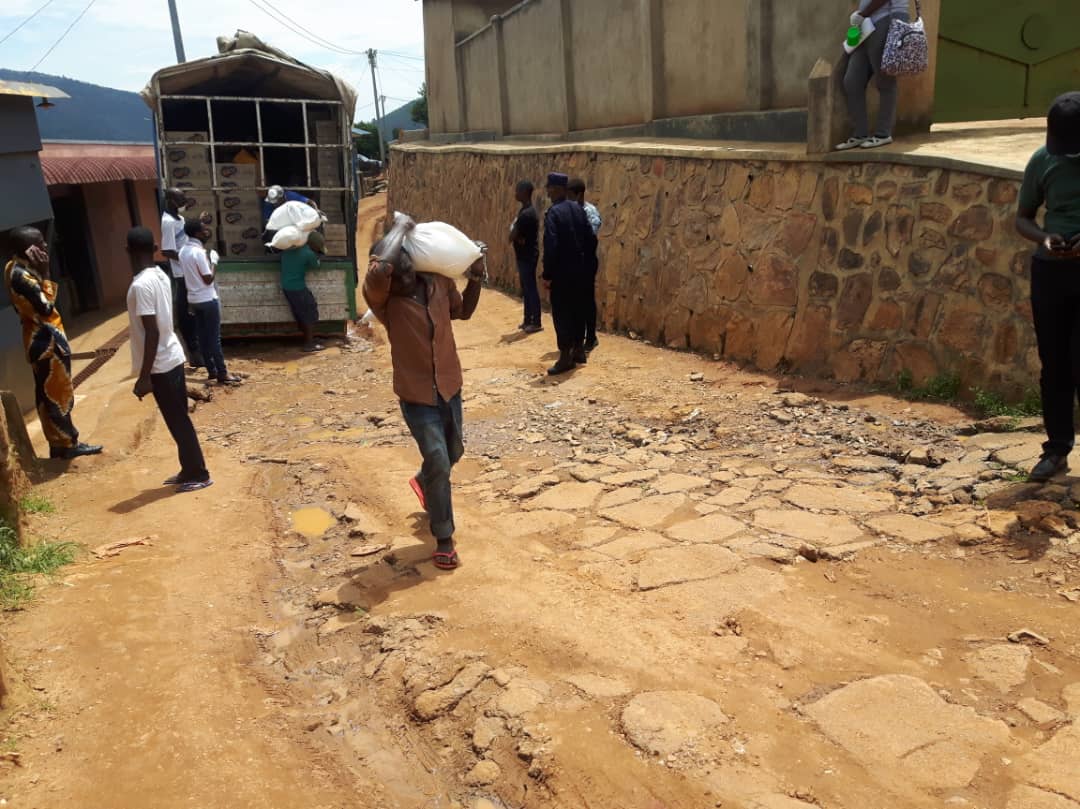 People have been urged to continue observing government measures to stay indoors and observe social distancing and hygiene rules in line with combating COVID-19. 60 people have tested positive of the virus with no death recorded so far.

The first batch of patients is expected to be released mid next week.