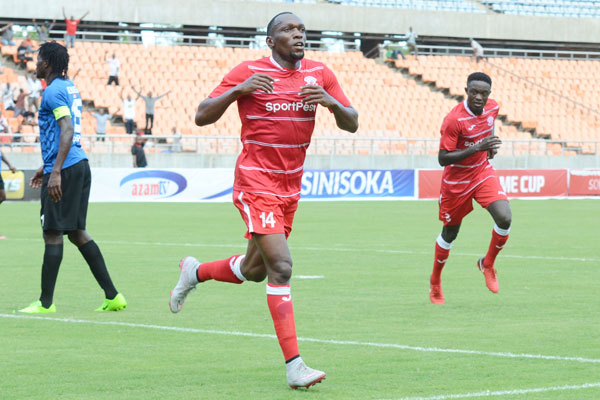 If you ask, ‘what is the best football league in East Africa’ to football fans in the region, you will get different answers with many praising their own home leagues mostly based on national pride.

But for Kagere Meddie,who has featured for different clubs in four countries in the region including Uganda,Rwanda,Kenya and currently Tanzania, believes the Tanzanian football league is more competitive and fans are more passionate than the rest.

Speaking to KT Press from his home in Kigali where he is staying with his family after football activities were suspended almost all over the world due to the coronavirus pendemic,Kagere said other leagues in the region should learn a thing or two from the Tanzanian top-flight football.

‘The competition here in Rwanda is not as much as the competition in Tanzania.All clubs (in Tanzania) compete to do better. They all want to beat my club Simba,”Kagere said .

With some of top teams in Rwanda embracing the policy to sign only Rwandan players,Kagere believes this could have affected the competition in Rwandan football.

The striker who finished top scorer last season leading his team to the league victory, hailed Tanzanian fan as the most passionate.

“They love their teams and like the games. They don’t miss any game even if games are held in the village they will go and watch but it’s totally different in Kenya where you sometimes have to play in almost empty stadiums and some of the fans don’t even know when their team is playing,” Kagere said.

“There is also no competition when it comes to Kenya. There is only one team and that’s Gor Mahia. When I was there we used to play knowing that we are going to win the league. We went to play games being sure we were going to win.”

Kagere urged Rwandan players to always challenge themselves if they want to make it elsewhere.

“My advice to my fellow Rwandan players is that you have to challenge yourself if you want something. I started from down; I came to Atraco it didn’t work and I started afresh, then Kiyovu,Mukura and Police FC.There was a lot of competition but I said I have to reach somewhere,” the international striker said.

“If you want to be on the top, know it’s very hard to get there but it’s very easy to go down. It depends on your character.”