The Roman Catholic Church of Rwanda has requested the Group called Intwarane which claims to be Monastic sisters and brothers/Monks of reparation and consolation of the Sacred Heart of Jesus and Mary to stop all its activities without further due because it is illegal.

A letter from Antoine Kambanda the Archbishop of Kigali – addressed to all parish priests and parishioners of Kigali Diocese said that they held several meetings with the said group which is dominated by members from Muyanza, Mushubati, Cyangugu, Rususa, Mibirizi, Rusumo and places across Rwanda like  Bukinda and Kisoro in Uganda and several parishes of Kigali among others.

The archbishop said that the group was advised on several occasions on the behaviors to adopt if they were to be a legal Monastery, but until December 2019, they “continued to show that they were not ready to follow the required steps for a just-born religious congregation.”

And this month, the letter from the archbishop reads, they were advised “not to continue to interfere with the church and its liturgy which they started between 2011 and 2013, but they showed that they were unchallengeable.”

Therefore, archbishop Kambanda wrote this morning; “We would like to officially announce that this group is illegal the Catholic Church.”

“We would like to call upon its actual members and aspirants to follow rules and regulations of the Catholic Church and the country at large and to drop that self-given identity and clothe of a religious group.”

He further said that those deviants can go to their respective parishes and to the archdiocese “for the church officials to help them re-embark on the right path.”

Intwarane and their Controversial mission

Members of the group, who claim to belong to the Roman Catholic Church, started slowly but surely in 2011, operating from residential houses in Kigali.

In mid-2018, they wanted to “show off” and were arrested while drumming and sounding other instruments in Kiyovu, allegedly, en route to the State House.

According to reports, they started by interrupting a mass at St Michel Cathedral and the priest complained, called the local defense personnel which would also call Police after being overwhelmed.

Police said the group then headed to Gakinjiro, shouting “You should repent otherwise more blood will be shed than what was shed during the Genocide against Tutsi in 1994.” 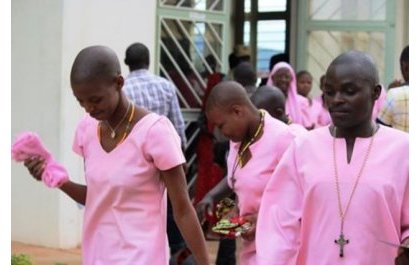 According to media reports in August 2018, Nyarugenge Primary court remanded 7 women and one man in this case but released two other suspects including Agathe Nyirahabyarimana, the alleged founding member of the group. It was established that she was not part of the public incitement.

While in court, prosecution reminded procedures for one to give a public message and to demonstrate but Intwarane said they were on a mission of someone who is beyond the law.

The suspects said they did not need to seek authorization to demonstrate “because their message was from the Holy Spirit”, adding that they carried a message of war that was to happen.

They confessed that they spread that message in different parishes from across the country and beyond the borders.

They also confirmed that when they were arrested, they were heading to the Kiyovu-based State House to deliver the message to the Head of State.

Delivering the message was supposed to be their spokesperson Chantal Mutamba. Asked about the message, the later said that she couldn’t recall which message she gave because she was “possessed by the Holy Spirit.”

The court ruled that the eight should face the charge of illegal demonstration and public gathering, and inciting insurrection and trouble among the population.

The case proceeded and reached the high court. On February 10, 2015, the high court sentenced the  8 Intwarane suspects to 5 years in jail over public incitement and illegal demonstration. They appealed against the sentence.

After the appeal, Chantal Mutamba was cleared after presenting medical certificates proving she was mentally ill while another suspect one Nyirahabimana was also cleared because it was established that she only used to lend them space in her house to assemble but was not part of the demonstration.

After Mutamba was cleared, the group took that opportunity to say that they could not be charged while the very suspect that represented them, spoke for them is cleared.

Intwarane were cleared of all charges by the Supreme Court in April 2015 calling the allegations put against them unsubstantiated.