Relief As Rwandans from UAE Are Repatriated Back Home 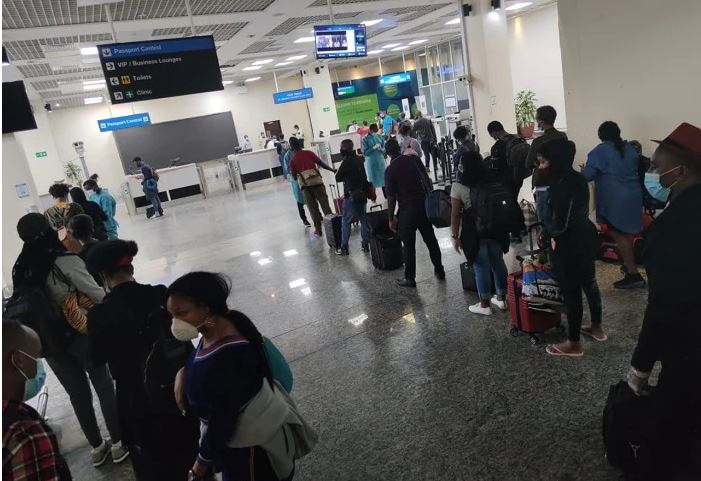 It was finally relief for Rwandans who were stranded in the United Arab Emirates (UAE) who could not return home since March after work came to a stop and flights cancelled to stop the spread of New Coronavirus in the middle eastern country.

A Fly Dubai flight evacuation flight carrying 51 Rwandans and 3 foreigners touched down at Kigali International Airport in the early afternoon on Friday after the flight was postponed several times.

Upon arrival, the group was taken for testing and isolation in designated locations for at least 14 days before they could be allowed to reunite with their families.

It was excitement as they finally arrived home after several attempts to be evacuated were put on hold as negotiations on how it would be done continued.

Deo Niyonkuru, who was in UAE before the COVID-19 outbreak said that they were relieved to finally get back home after more than two months of being stranded in the Middle East country after everything came to a standstill as the country imposed a lockdown to contain the pandemic.

Majority of the returnees were Rwandans studying or working in Dubai and other cities of UAE but got stranded after all activities ground to a halt.

“All I can say is that we are excited to be back home. Life was difficult for many of us without any income yet we had to pay rent and other expenses,” says Niyonkuru.

He said they had to pay for the ticket at a high price because they did not have other options and wanted to return home urgently.

“We paid for our own tickets but the Rwandan Embassy helped us a lot in the negotiations with the government to secure a flight for us out of UAE. Other Rwandans who had what to do stayed behind but others who were struggling to make ends meet organised to return home,” he further explained.

The evacuation flight had been scheduled for May 16 but it was postponed to May 29 because the number of citizens willing to return was not enough to warrant the flight. Niyonkuru said they paid $422 for the one-way ticket yet normally the return ticket costs $353.

Though relieved to return home, the returning citizens want the government to help them cover the cost of isolation since most of them have not been working and others are students who have no incomes or means to cater for isolation costs.

“We have been struggling for nearly three months. Most of us have no money yet we have to cater for isolation costs until we are cleared to reunite with our families.

Rwanda’s Ambassador to UAE, Emmanuel Hategeka earlier told KT Press that the returning citizens had been tested and all necessary precautions were taken to ensure that they are isolated to avoid any risks.

Majority of the imported COVID-19 cases came from Dubai before Rwanda decided to close borders in March and stop all outbound and inbound flights.

“You can’t say no to someone wishing to return home but all COVID 19 precautions have to be taken. There are some measures we have taken if that can be the reassurance,”

“We tested 56 Rwandans as a result of contact tracing. Of those 15 were found positive and have all recovered after 15 days of quarantine and some treatment. Before they fly, they will be tested for symptoms at the airport,”

“While in Rwanda they will undergo the mandatory 14 days quarantine,” Amb. Hategeka said.

Appearing on KT Radio earlier this week, the Director General of Rwanda Biomedical Centre (RBC) Dr Sabin Nsanzimana said that all returning citizens will be isolated at their own cost. He said the designated centres are available at different rates, giving people a choice.