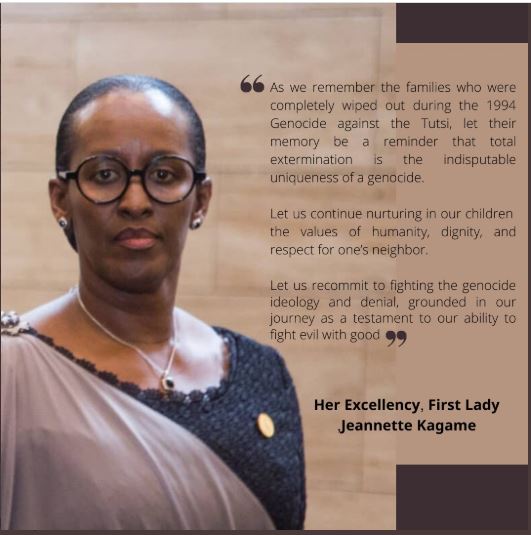 The First Lady Mrs Jeannette Kagame has urged for the continued remembrance of completely wiped out families during the 1994 Genocide against the Tutsi and use it an opportunity to fight the genocide ideology and genocide denial.

In her message on the occasion to commemorate wiped out families during the 1994 Genocide against the Tutsi, Mrs Kagame called for the nurturing of children with the right values of humanity which go against the same reasons that made the genocide possible.

“As we remember the families who were completely wiped out during the 1994 Genocide against the Tutsi, let their memory be a reminder that total extermination is the indisputable uniqueness of a genocide,”

“Let us continue nurturing in our children the values of humanity, dignity, and respect for one’s neighbor. Let us recommit to fighting the genocide ideology and denial, grounded in our journey as a testament to our ability to fight evil with good,” Mrs Kagame said in her message.

A family is said to have been wiped out; when all members of the family (parents and children) were killed during the Genocide.

GAERG said that the commemorative event this Saturday was held in adherence to the COVID-19 prevention measures, through Radio and Television programmes and social media by sharing messages and small videos.

A talk show will be organized on Rwanda Television this Saturday at 3pm focusing on the importance of commemorating the families wiped out and the issue of denying the Genocide against the Tutsi.

“The discussions will also focus on the role of various institutions in educating future generations about the Genocide against Tutsi; the importance of commemoration and remembering wiped out families, especially with the aim of discouraging and fighting against genocide deniers,”

“As we commemorate for the 26th time the Genocide against the Tutsi, Rwandans have been advised to refrain from rhetoric, publicity and other acts that promote hatred and discrimination leading to the ideology of Genocide,”

“However, the safety of Genocide survivors and witnesses continues to be under threat,” the Association said.

GAERG said that the findings of research into and strategies to counter different forms of denial and minimization of the Genocide against the Tutsi in foreign countries, 2019 by the Senate of Rwanda identified five channels of denying and belittling the Genocide against Tutsi.

The Senate called for efforts to be made through various channels to spread the truth about the Genocide against the Tutsi.

GAERG has enumerated those families in all 30 districts of Rwanda; The figures available to date show that 15,593 families made of 68,871 people were wiped out.

The association has started a project to write a book on these families, a documentary movie and a database to safeguard their history. The project is worth Rwf64m.

1000 Entrepreneurs in Refugee Camps, Host Communities Get A Grant on W. Refugee Day