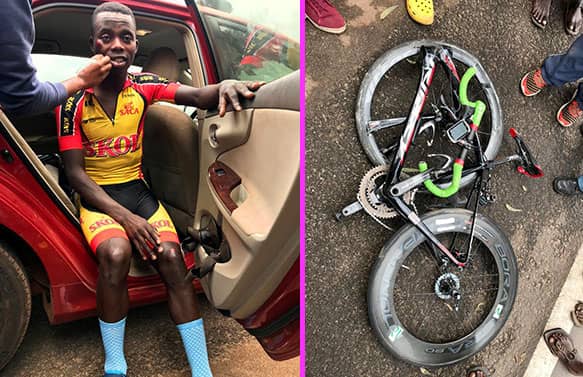 The 2020 Tour du Rwanda runner-up Mugisha Moise of SACA Riders was involved in a high-speed crash on Friday morning but, he luckily was not seriously injured.

The incident occurred in Kamonyi, around 20 Kilometers from Kigali, when Moise knocked over a pedestrian and narrowly avoided being hit by a lorry after being knocked off his bike.

The 22-old rider amazingly fell off his bike at the right time before it was crushed by the lorry.

“It happened on the descent when a pedestrian tried to cross the road and collided with Moise who fell off the bike. He managed to avoid being run over by the lorry behind him.”

“It was scary as the bike was completely destroyed but lucky he is okay now. He just lost some skin”

Mugisha Moise had been selected to represent Rwanda at this year’s World Road Championships in Switzerland before the races were canceled due to the coronavirus.