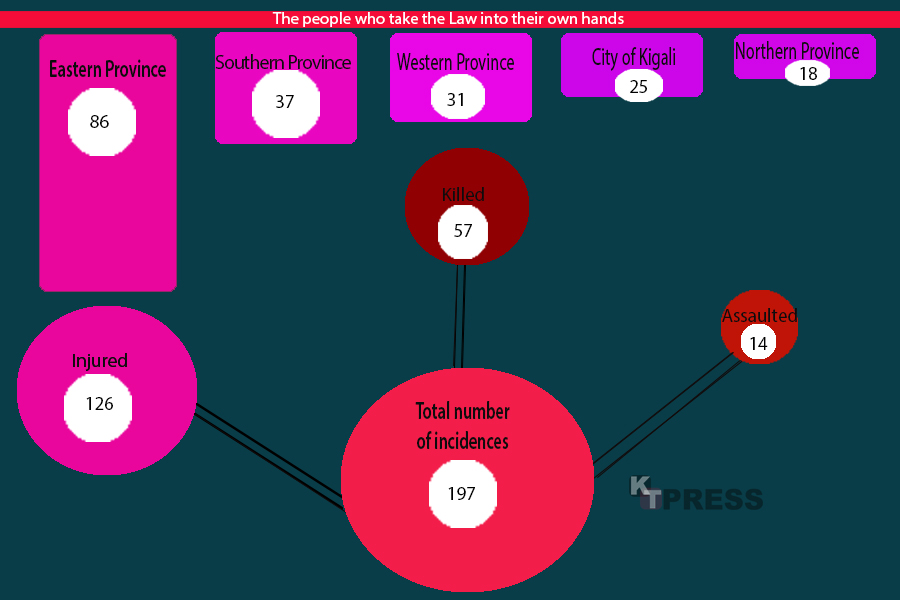 A Senate committee report has showed that the eastern province has the highest number of citizens who take the law in their hands and mostly because of being victims of theft cases.

The Senate Political and Governance committee was on Thursday presenting findings of its consultative meetings with government over the issue of some citizens taking the law in their hands, which has resulted into deaths in several instances.

Committee Chairman Lambert Dushimimana said that the report intended to know the status of this issue and how government plans on addressing it since there are existing laws, levels of governance and constitutionally no citizen is supposed to be above the law in Rwanda.

In his report, Sen. Dushimimana showed that since January 2020, the highest numbers of the issue was recorded the Eastern province with 86 cases followed by the Southern (37), Western (31), the City of Kigali (25) and the Northern  being the least affected with 18 cases.

These were also followed by some cases in Gisagara and Gasabo districts respectively.

Nyarugenge, Nyagatare, Rutsiro, Gicumbi, Kicukiro and Nyanza districts had above 5 cases, while the remaining districts had less than five.

By month, the report showed that in 2019, most cases were recorded in January and April 2019, followed by June, September.

In 2020 most cases were recorded in January and July.

“The biggest causes of these incidences was the issue of theft at 45.1%, where most of the alleged victims take the law in their hands to punish the suspected persons who stole from them instead of seeking the law,” Sen. Dushimimana said.

The second top cause, according to the report is fornication among married spouses, followed by disputes over family property, debts of different forms, and suspected witchcraft.

“The commission inquired the opinion of government and we were told that this is caused by lack of fear to be punished by the laws even when the punishments are grave,” Dushimimana stated.

The other causes are ignorance of the penal laws, drug abuse, forceful enforcement of government directives, dissatisfaction with prosecution decisions on suspected criminals and failure to assimilate policy changes for example in gender equality and family laws.

Dushimimana said there were many reasons given for the causes of these incidences “but as a committee we asked government to do an in-depth research to find out the causes.”

“We couldn’t understand how some cases could happen, for example a mother burning a child with a flat iron because the child took Rwf100 or a husband pounding a wife to death because she delayed to return home,” Dushimimana said.

Senator Clotilde Mukakarangwa agreed with the idea of having a detailed research finding in the causes of such incidences but asked that involving citizens would be a validation of the research.

“We already have the government side but it would be good to have citizens tell us more details since they are on ground. The other thing is we should have these cases categorized by age so that we have a good picture,” Mukakarangwa advised.

Sen. Juvenal Nkusi, said that access justice is for all but not all these cases can be handled in courts of law, and suggested that security and governance organs have to rethink ways of creating trust among citizens so that such cases are handled effectively.

“These examples we were given are criminal not just abuse of the laws thus there is much more that needs to be done when it appears that some do this because of being failed by justice,” Nkusi said.

Most senators agreed that the report findings should be addressed as an emergency issue and that government looks into the recommendations urgently but also consider punitive measures for citizens who take laws in their hands.