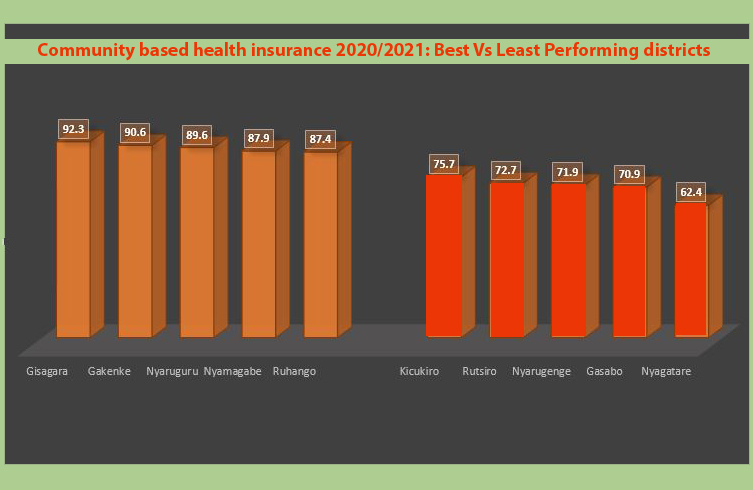 Rwanda Social Security Board –RSSB has published the status of subscription of the community based health insurance (CBHI) 2020/2021 which has reached 81.1% at national level as of this month.

CBHI program commonly known as Mutuelle de Santé: is a solidarity health insurance system in which persons (in families) come together and pay contributions for the purpose of protection and receiving medical care in case of sickness.

The government subsides 90% the contributions of citizens to enable them receive an almost affordable health care by paying only the remaining 10% of their medical bills.

Though Rwanda is still financially struggling with the impact of Covid-19, figures posted on RSSB twitter this Saturday show Gisagara district leading the rest of 30 districts in the country with a subscription level of 92.3%, followed by Gakenke 90.6 %, Nyaruguru 89.6 %, Nyamagabe 87.9 % and Ruhango 87.4 % among top five.

This performance doesn’t come as a surprise after Gisagara district also came among the top five districts in implementing the community development programs according to the Performance Contract (Imihigo) Report for 2019/20, which was announced on Friday.

Just as in the Imihigo report, health insurance subscriber’s figures also show that the southern province is leading the rest of the provinces with 85.4%, followed by Northern 81.7%, Eastern 78.5%, Western 74.6%, and the City of Kigali pulling the tail at 67.9%.

Despite this citizen’s contributions, district hospitals will have to do more in accounting for the CBHI funds after the 2019-2020 Auditor General’s (OAG) report shows that financial reports provided by the district hospitals are not authentic and couldn’t be trusted.

The OAG report showed, for instance that Rwf709million of hospital payment claims were rejected by insurance (general and life) companies due to billing receipts based on outdated insurance cards, overcharging services, lack of transfers and treating cases that are not priced (covered) in insurance policies.

OAG also showed 12 district hospitals had overstated internally generated revenue amounting to Rwf1.2 billion relating to prior periods and was recognized as revenue in the year under audit.

There were also unsupported creditors, a component that involves Rwf387 million in eight (8) district hospitals.

District hospital officials argued that this was caused by lack of skills in using the Medical Registration system and reconciling it with the new Integrated Financial Management Information System (IFMIS) thus many errors but skills training have improved the situation and some staff held accountable for the losses.