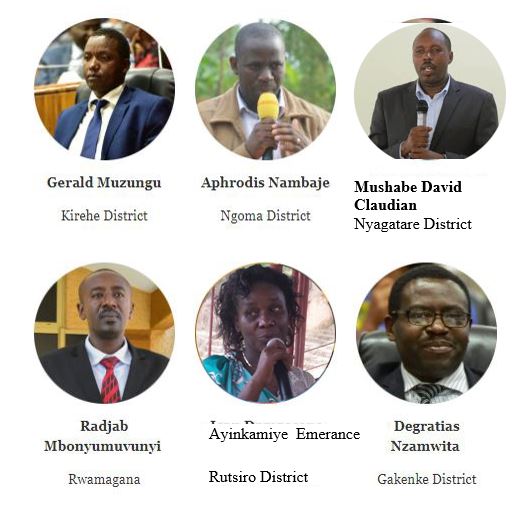 Some of the incumbent district mayors

The National Electoral Commission (NEC) has scheduled local leaders election to 6 February – 2 March 2021, while the current elected local leaders including mayors, vice mayors and grassroot leaders will end their term in office a week earlier.

The National Electoral Commission(NEC) indicates that the leaders to be elected include those at village and cell levels and district committee leaders.

“The incumbent grassroot leaders will leave their respective offices, as per the law after 5 year term. This period will end on December 28th. Pending new elections, the district executive secretaries will take over the interim,” Charles Munyaneza, the NEC Executive Secretary said.

“Preparations are underway; we shall start receiving candidatures from December 28th and in the meantime, the ministry of local government issue guidelines on how incumbent leaders will start leaving their offices,” Munyaneza said.

According to NEC, the forthcoming candidates will be required to submit their candidatures from 28th December 2020 to January 11 next year while voters’ lists will be updated  from January 11 to 22, 2021.

From 9-13th February, committees of the youth, women and people with disabilities and sector council will proceed, followed by election of district executive committee of a mayor and two deputies(vice mayors).

“The biggest elections will be for Mayors and vice mayors, they will be elected on 2nd March, after the council of women, the council of disabled people and council of youth, all on the district and country-level will also be elected that very day,”Munyaneza said.

According to Munyaneza, the polling station will be increased to respect the Covid-19 preventive measures.

Meanwhile, NEC will spend Rwf3.3 billion in the upcoming elections.