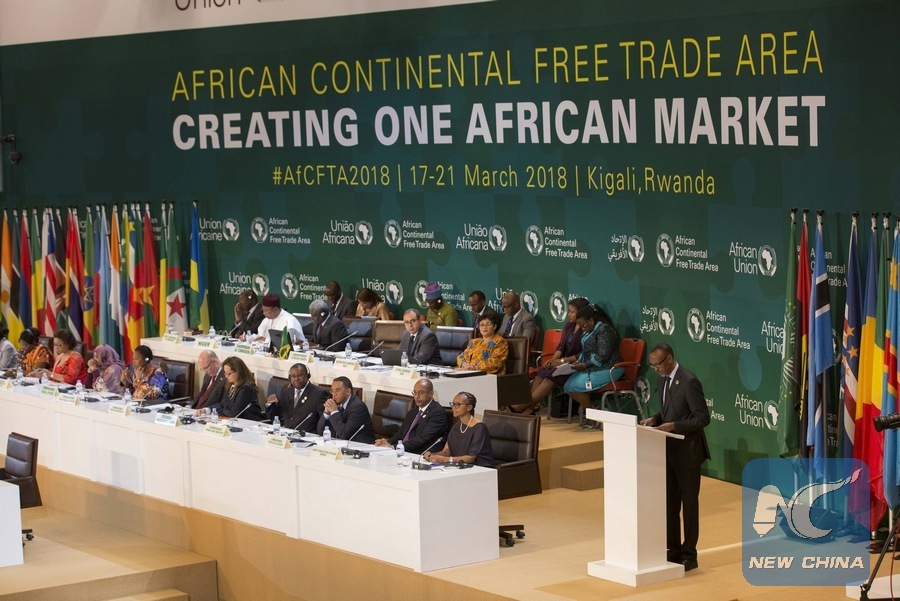 President Kagame speaking at the AfCFTA signing ceremony in March 2018

President Paul Kagame has been recognised for his endless efforts put in the process, initiation and formation of the One Africa continental trade agreement- African Continental Free Trade Area (AfCFTA).

AfCFTA, the largest free trade area in the world, began trading on 1 January 2021 and is expected to speed up African recovery and to enhance its resilience by increasing the level of intra-African trade in goods and services.

It is expected to transform the continent with its potential market of 1.2 billion people and combined GDP of around $3 trillion.

For Kagame’s role in selling and bringing this deal to pass to other African countries, the African Development Bank on Friday honored him among 11 African leaders for their leadership in AfCFTA process.

Kagame was recognized for his role and belief in the agreement which he started pushing in 2018 with some other presidents.

They encouraged the rest of the continent to open their borders and airspaces so as to do business with each other and break current trade barriers.

Kagame’s efforts as the then Chairperson of AU, saw the AfFCTA agreement penned in Kigali in March 2018 and taken up by majority of African countries including Africa’s economic giants South Africa and Nigeria.

Kagame’s award was received on his behalf by officials at the Rwandan embassy in Ethiopia.

The ceremony sow presentations on the state of business potentials in e-commerce in Africa and the role of the private sector federations as a way to kick start the agreement.

Ambassador Albert Muchanga, African Union Commissioner for Trade and Industry, noted that the AfCFTA generated strong support in Africa and the Diaspora.

“We are proud to acknowledge our champions who have been at the forefront of this process,” he said.

He took the opportunity to thank the heads of state and governments whose countries have ratified the market and invited others to follow suit.

“We are also celebrating the key milestones achieved from when we laid the foundation for the initiative to the official start of trading on January 1. I would like to call on governments and the private sector to take advantage of opportunities created by the continental initiative to make Africa more prosperous,” added Muchanga.

Dr. Amany Asfour, Interim Chair of the African Business Council, emphasized the role of the private sector in implementing the AfCFTA.

“We in the private sector are committed to the implementation of this initiative. We will support Africa to actualise the free trade area,” he said.

“Jobs have to be restored and livelihoods and economies revived,” Kahuthu said.

“We also need to come together to promote products made in Africa to effectively implement AfCFTA.”