As the world continues to grapple with the New Coronavirus and its devastating effect on economies, President Paul Kagame says global recovery and social protection agendas should cover both wealthy and poor countries because they have all been affected in equal measure.

President Kagame made the observation on Monday while speaking at the virtual Davos Agenda 2021 on Advancing Social Contracts organised by the World Economic Forum (WEF), alongside global leaders and heads of multinational and civil society organisations.

The Head of State said that the COVID-19 pandemic has hit hard all countries in equal measure, with workers everywhere being the most affected as businesses shut down, but above all it taught countries lessons on what to do or apply even in the future when similar pandemics break out.

“As we have seen, it hit workers very hard and governments have responded with the tools available. In Rwanda for example, we have established the Economic Recovery Fund of around $100 million designed to help companies stay afloat,”

“We also used the agriculture reserves to supply food to vulnerable families during lockdown and paid health insurance for 2 million citizens,” President Kagame said, highlighting what Rwanda has done to respond to the crisis brought about by the COVID-19 outbreak.

The Head of State said that the crisis has revealed gaps in the existing social protection systems everywhere in the world, pointing out that the manner in which the world responded revealed gaps and brought to the surface the existing problems that have been known before but not tackled.

“In many cases these systems had already been hollowed due to fiscal austerity and the erosion of labour protections. This has been a very key feature of the problems we are talking about,” President Kagame said.

He added that fixing this is something that needs to be done because it will also make societies more resilient in the face of future pandemics, which could be around the corner.

President Kagame, who has been a proponent of developing countries getting different forms of debt relief and freezing to overcome the impact of COVID-19 said that the social protection agenda should equitably cover all countries regardless of their economic status.

“The social protection agenda cannot be limited to wealthy countries indeed. In fact, the pandemic has also reminded us of how we are interlinked and how we are interdependent in many ways,”

“Things happening in one part of the globe affect the other part as well. It doesn’t matter how rich or how poor we are. It must be inclusive therefore globally. Otherwise, existing inequalities among countries will only grow wider and the working conditions in developing countries will degrade,” President Kagame said.

A case in point he said is the arbitrary distinction between formal and informal sector employment particularly in the developing countries where many earn their livelihoods assmall scale interpreters, especially women and the young people.

He said that there is a need for innovative and comprehensive approaches to social protection that include workers of all backgrounds and types.

President Kagame said that the global social protection fund which has been mooted is a bold idea that merits serious consideration by policymakers. 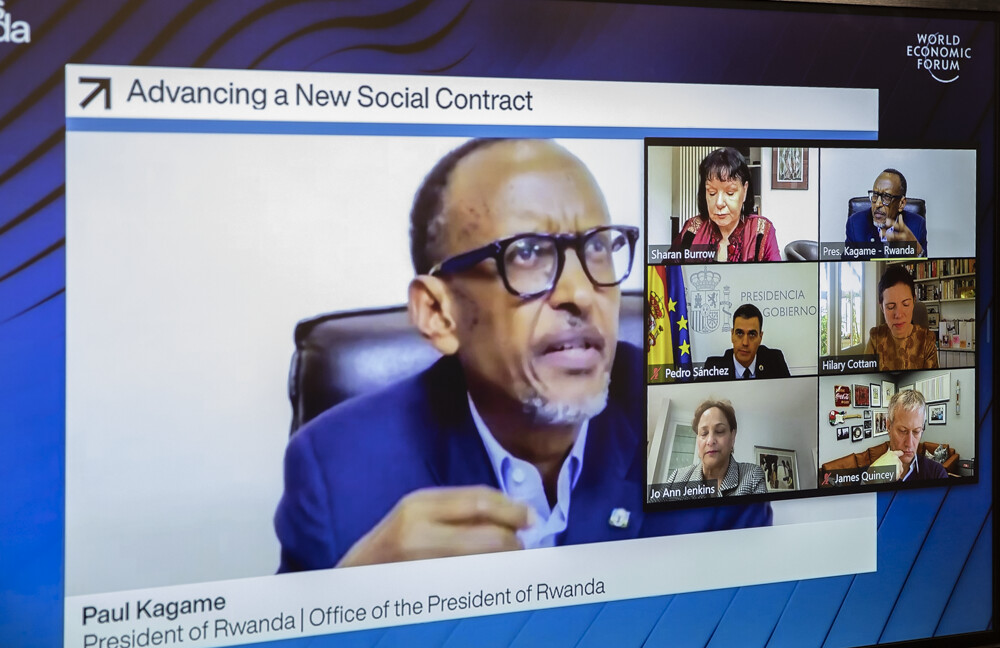 The fund has been previously proposed and backed by the United Nations. The International Trade Union Confederation (ITUC) says the fund is even more important now as countries grapple with the COVID-19 pandemic.

ITUC says the pandemic has revealed a global divide between rich and poor countries, with workers in the poorest countries bearing the brunt of the impact, putting lives of millions of women and children especially on the line.

The Secretary-General of ITUC, Sharan Burrow, who was part of the panel, reiterated President Kagame’s position, calling on G20 countries to commit towards the global social protection fund.

Other panelists included the Prime Minister of Spain, Pedro Sánchez, who spoke about his country’s recovery plans. Spain is among the countries hardest hit by the pandemic.