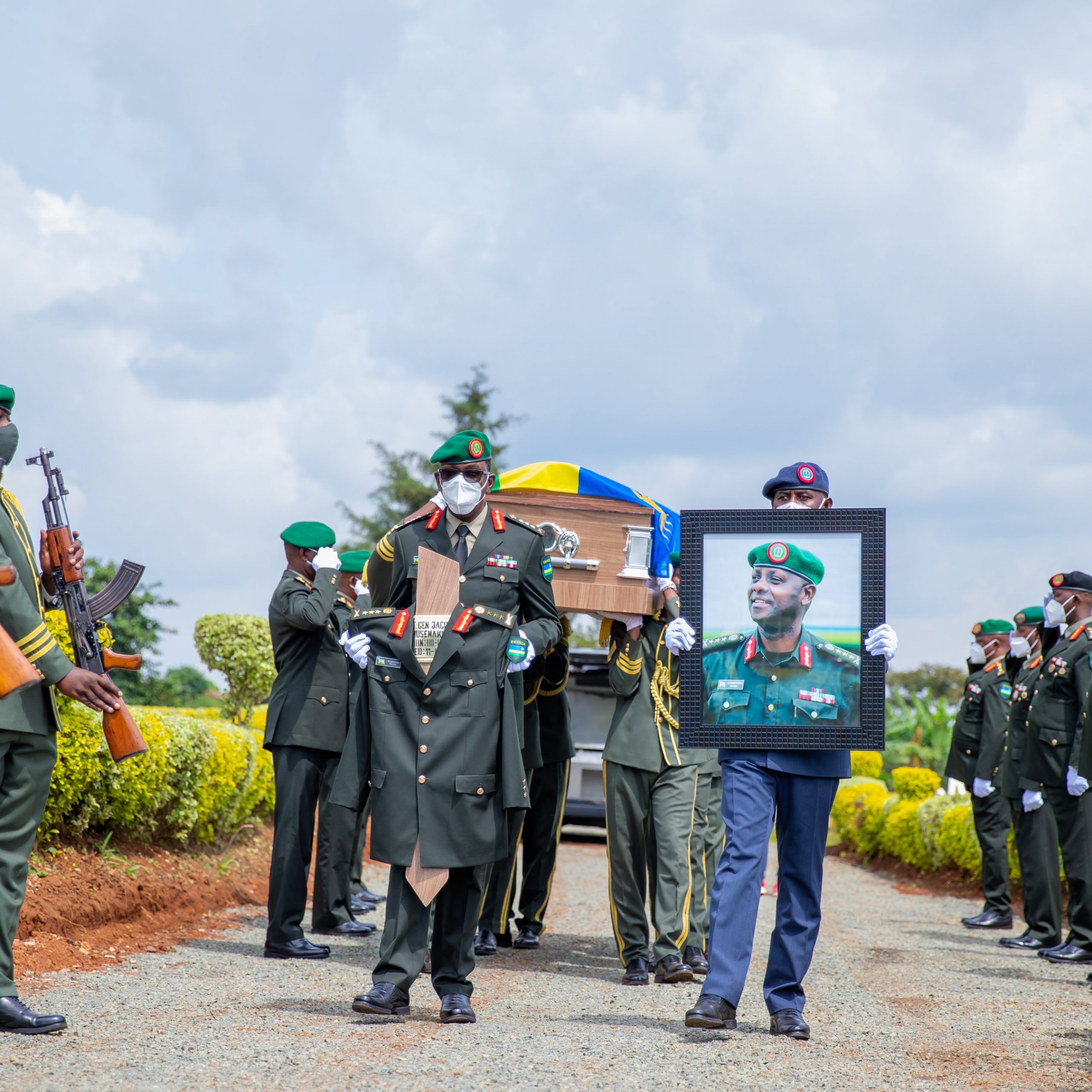 RDF Officers carry a casket bearing the remains of Lt. Gen Jacques Musemakweli through a guard of honour on Friday during his funeral.

President Paul Kagame has described the late Lt Gen Jacques Musemakweli as a fighter who fought and worked tirelessly for the liberation and socio-economic development of the country.

President Kagame, who is also the Commander-in—Chief of the Rwanda Defence Force (RDF), paid tribute to Gen. Musemakweli, who passed away last week and was laid to rest on Friday in a ceremony attended by family members, RDF top brass and senior government officials.

The Head of State’s message was read at the burial ceremony by Gen. James Kabarebe, the Senior Defence and Security Advisor in the Office of the President.

“On my own behalf, my family and the Rwanda Defence Force, I would like to express my sincere sympathy to the Late Lt Gen Jacques MUSEMAKWELI’s family as we honourably bid farewell to him,”

“It is an extremely sad moment for the family of the Late Gen MUSEMAKWELI. It is indeed a time of sorrow for the entire RDF fraternity and to the Nation at large, as we recall all we went through together with the Late Gen MUSEMAKWELI in different times, his commendable service and exemplary achievements during the struggle for the liberation of our country and the subsequent struggle for the socio-economic development of our Nation he was still contributing to, up to the day he passed on,” President Kagame said.

The Head of State said that Gen. Musemakweli “worked tirelessly and selflessly for this Nation and his contribution is evidenced by the various appointments he held over time, to serve RDF in different capacities.”

He said that the appointments testify to his exceptional commitment to fulfilling the core values RDF stands for, which is exemplified by his unrelenting endeavour to always instil the said values to other RDF officers and men.

“His untimely passing comes at a time the Nation and his family still needed him. What we can remember on such a day, is that all of us should strive to carry on the legacy of loving and working for our country, a value that characterized Late Gen MUSEMAKWELI,”

“The leadership of Rwanda, through the Ministry of Defence and RDF, assures the family of Late Gen

MUSEMAKWELI of their unwavering continuous support as the law requires and as it is a practice in our culture,” President Kagame said in his message. 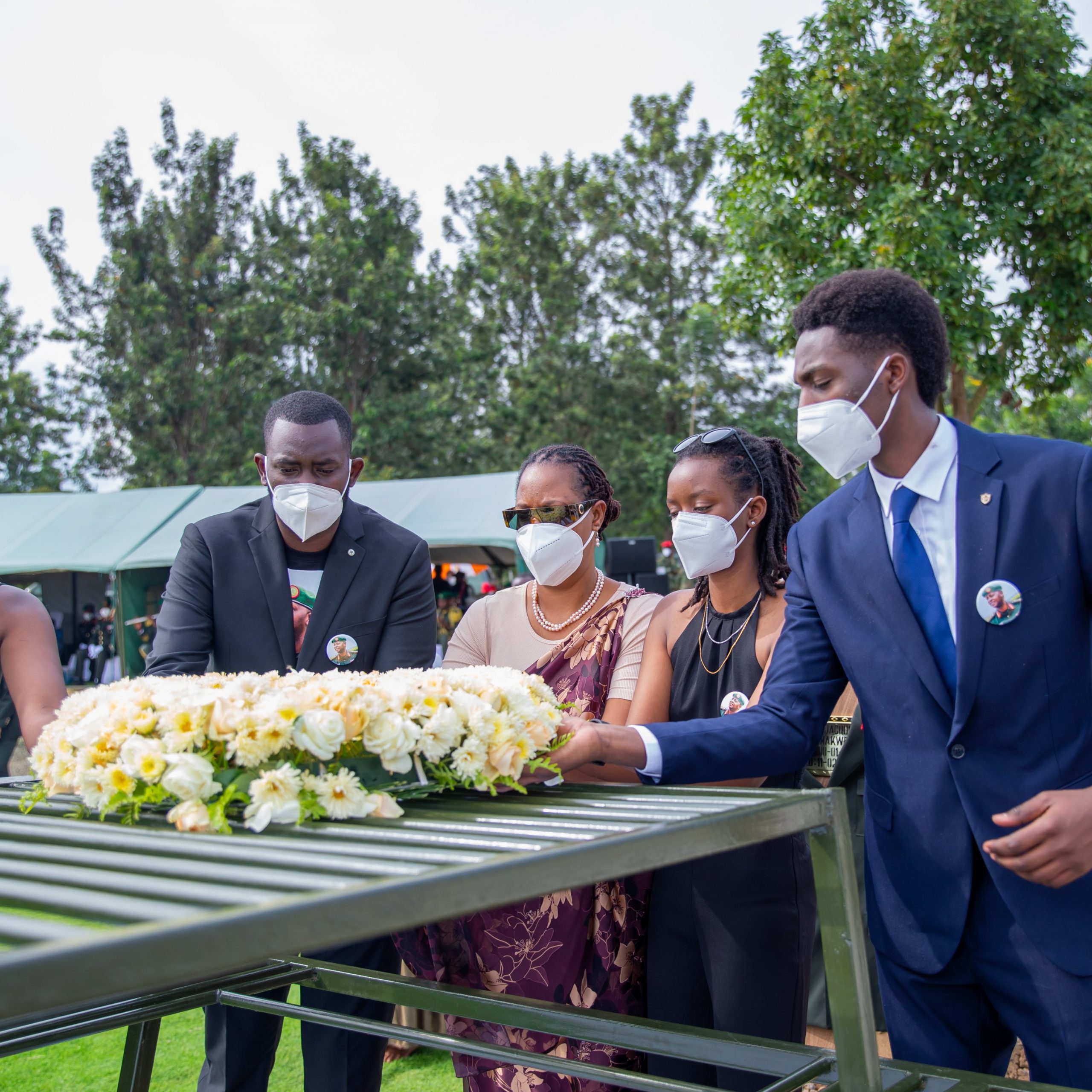 President Kagame thanked all the people who joined the family and the entire RDF fraternity to give an honourable send off to Gen. Musemakweli, urging them to be strong and continue supporting and comforting the bereaved family in the difficult time.

Gen. Musemakweli was laid to rest at Kanombe Military Cemetery, with military honours. He passed away on February 11, 2021, at Rwanda Military Hospital in Kanombe, where he was hospitalised and succumbed to ‘natural causes’ according to RDF.

Due to New Coronavirus restrictions, his funeral was attended by few people, while others were able to follow through a live Youtube link.

Speaker after speaker described Gen. Musemakweli as a humble, kind and virtuous man who served the country selflessly.

His children, who spoke amid tears, described him as a loving father who always advised them to be responsible and to put the country before self.

“Before I went to the U.S for my studies, Dad called me in his room and told me to always be responsible, to be a man and to always have the interests of the country at heart,” said Shaffy Musemakweli, one of his sons. 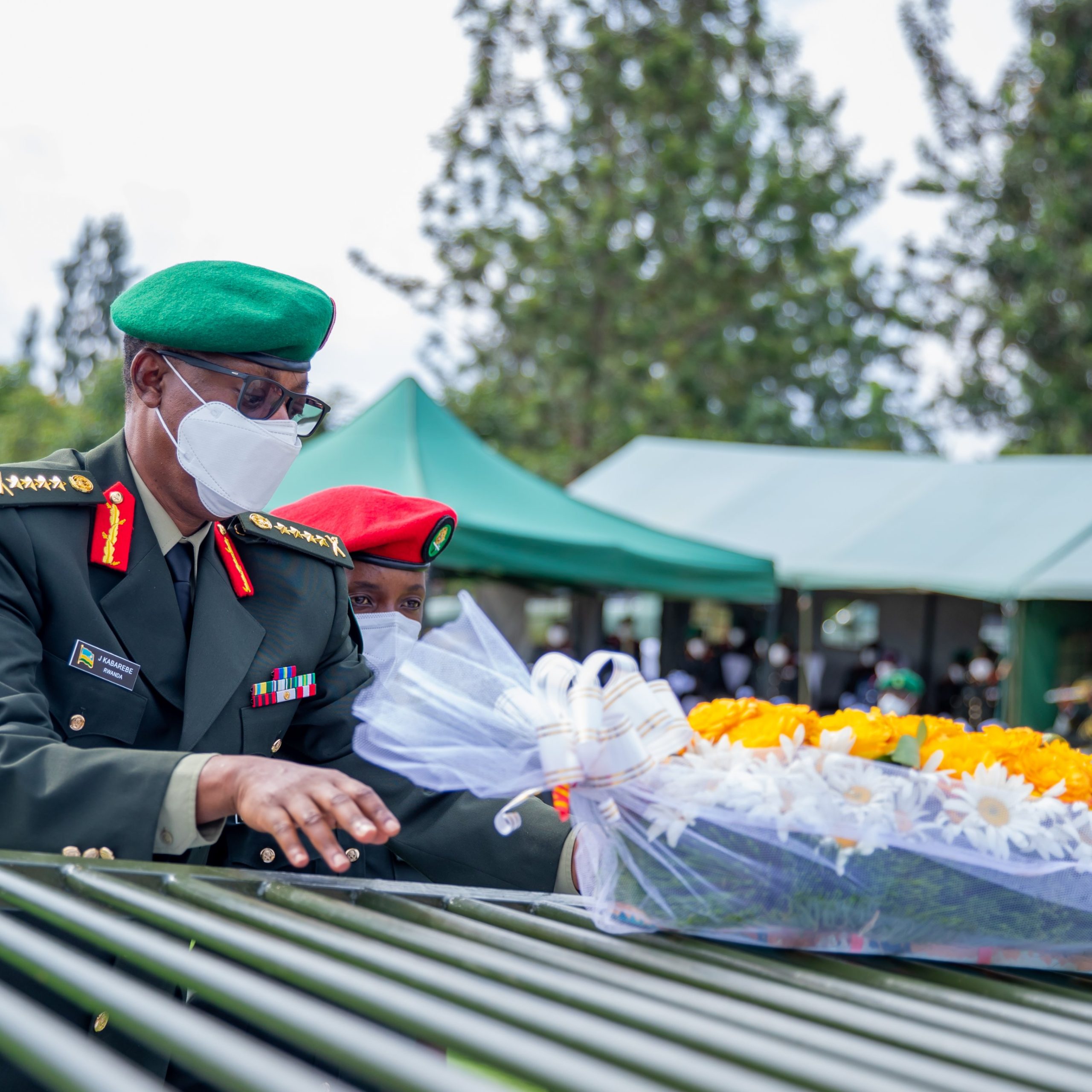 “I want to assure him that I will do exactly that and I will never let him down,” Musemakweli Jr said, while his eldest daughter, who spoke on behalf of their mother, said that they will make sure they keep his legacy and stay close to their grieving mother, who wasn’t able to speak.

Gen. Musemakweli’s children told mourners how their deceased parent was a doting father who played an active role in their upbringing and was always there to guide them.

Lt Gen Musemakweli was one of the most high-ranking soldiers in the country who served in different capacities. At the time of his death, he was serving as the Inspector General of the Rwandan Armed Forces.

His other responsibilities included being the Commander of the Republican Guard till 2016, the Army Chief of Staff (ACOS) and also as the Reserve Force Chief of Staff (RFCOS), among the different roles. He was also previously the chairman of APR FC and an ardent football lover.