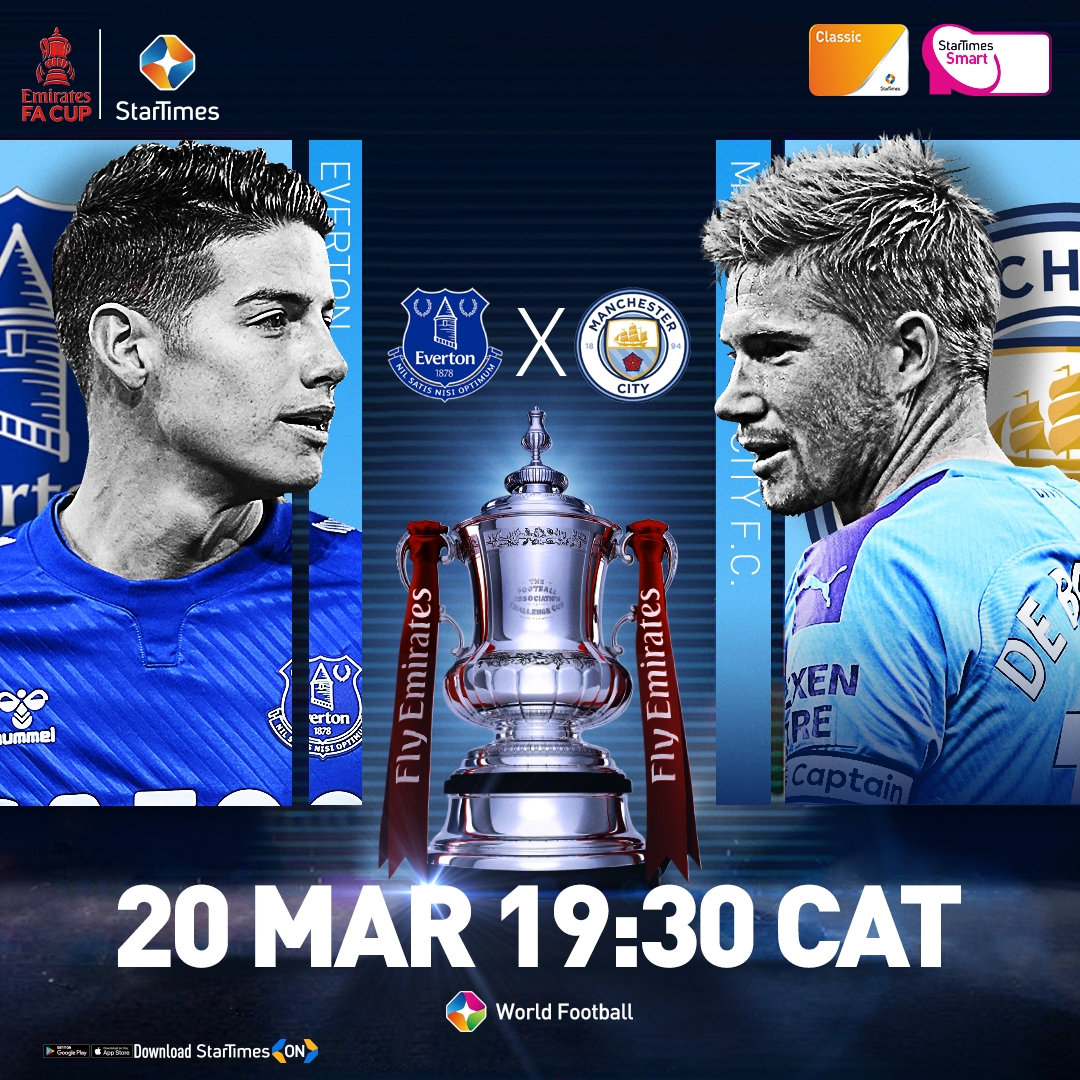 The FA Cup is back this weekend with thrilling quarter final clashes. English Premier League leader Manchester City are facing Everton while Manchester United are away to Leicester City.

When you take the four leading clubs in England, throw in the oldest cup competition in the world the end result can only be an exhilarating mix.

And that is certainly what this weekend’s FA quarter-final matches promise.

With the holders Arsenal being knocked out in the fourth round, one thing is guaranteed: a new name will be engraved on the beautiful trophy.

It seems unlikely though that the name that is written onto the trophy has not made it onto the cup before, as only Leicester City and Bournemouth – of the eight clubs remaining – have not tasted success in the competition before.

Manchester City, who have a commanding 14-point lead in the league, remain on track for their second double in two years as they face Everton in Liverpool on Saturday.

Midweek, Pep Guardiola’s side convincingly advanced to the quarter-finals of the Champions League with a 2-0 victory against Borussia Moenchengladbach and their fans would love to see a repeat performance on Saturday.

The coach said that they were looking forward to the FA Cup. “Now Everton. Everyone is fit – 20 players – but everything can change immediately, in one day.”

The other match on Saturday sees Bournemouth, who are the only non-Premier League side remaining, welcome near rivals Southampton.

Despite never having made it to an FA Cup final, Bournemouth have their place in FA Cup history as Scottish forward Ted MacDougall scored nine goals for them in their 11-0 victory against Margate in the first round in 1971. That remains the highest number of goals scored by a player in a single game.

Goals are something that Chelsea striker Tammy Abraham has also been scoring.

The England international is joint-top scorer in the competition, but he is the only player on four goals remaining and he is hoping he can add to his tally in the Blues’ game at home against struggling Sheffield United in Sunday’s early match. 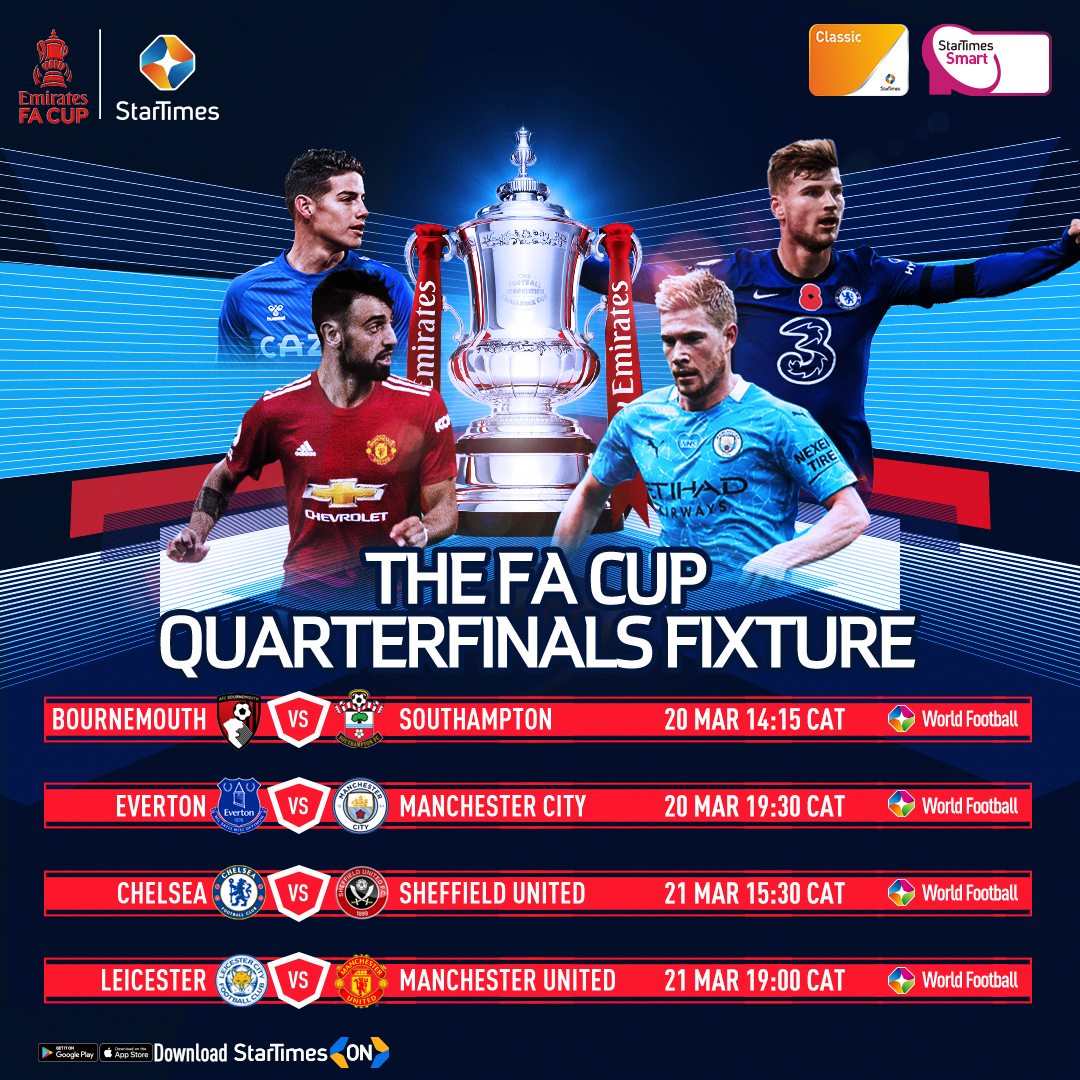 The Blades have won the FA Cup four times in their history, but those glory days are long past, as United last tasted success in 1925.

Arguably the best has been kept for last as Manchester United are away to Leicester City in the final game on Sunday. The Reds are having a season to remember and are well-positioned to continue their pursuit of further silverware.

Leicester City themselves are having a great season and coach Brendan Rodgers will face some tough decisions ahead of the game whether to start with Kelechi Iheanacho upfront alongside Jamie Vardy and Ayoze Perez.

The Nigerian scored a hat-trick in the Foxes in their last outing and said he was looking forward to scoring more goals for the side. “That’s what happens when three strikers play in the same game.”

All FA Cup action will be shown live and in HD on the StarTimes football channels as the competition is amongst the list of top-class football action that Africa’s leading digital-TV operator has secured the broadcasting rights to the exciting competition.

StarTimes also broadcasts all the action of some of the most exciting football events on the StarTimes football channels, such as Bundesliga, La Liga, UEFA Europa League or the coming UEFA Euro 2020.