Home Voices Ignore Reporters Without Borders – Rwandan Media Is Growing, Along with Government Confidence In It
Voices

Ignore Reporters Without Borders – Rwandan Media Is Growing, Along with Government Confidence In It 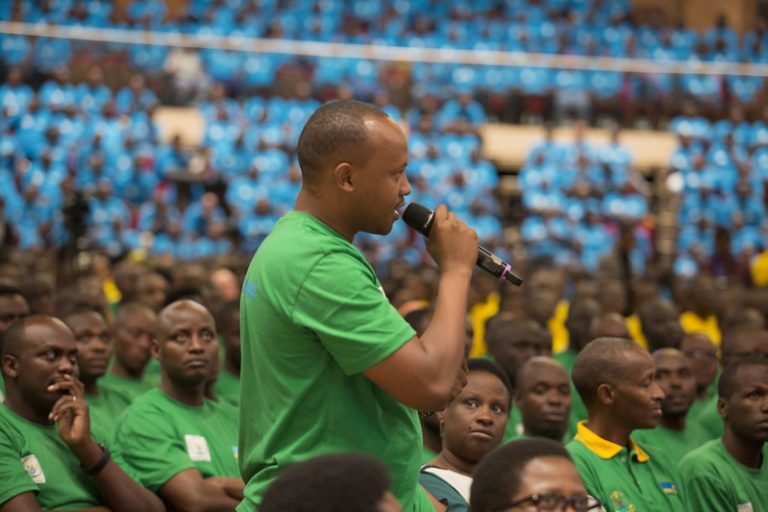 Charles Kakoza a-k-a KNC, a media owner speaks during meet the president May 2017

On 25 November 2010, a historical event took place in Kigali. The National Dialogue on Media Development, the first of its kind, brought Government and Media together talking on a round table. A few years later the loose relationship forged that day metamorphosed into a solid partnership. Now it is over a decade and tangible results are visible to all. Tremendous progress has been made in the Rwanda media sector. The other day I found concrete evidence.

The evident fruit of the said partnership is the buzzing Press House at Remera KG 17 Av 37, opposite Amahoro National Stadium. Here my eye meets a decently looking group of people, interacting with exaggerated swagger in a fragranced Press Room. They ooze smartness, from their dress codes of neatly fitting modern attires, to trimmed heads and freshly shaven faces. This good place is for Rwandan Journalists. Here they come every morning, spend the whole day working, and retire home late in the night. Nowadays working hours have been shortened due to COVID-19 curfew restrictions. So, they go home late evenings. During the old normal, the place opened for member journalists’ access 24/7.

Owing to a newly found desire to reunite, I spent the whole Friday 23 April 2021 afternoon mingling with them to have a firsthand feel of their current situation. What I saw impressed me much. The sector seems to have leapt bounds to do lots of catch up. No longer a mismatch, no more lagging far behind, Media is now close. One can even say it is nicely aligned with the country’s other sectors of the economy.

We shall come to the specifics of Government support throughout the years a little later. For now, allow me to describe what is physically there to see, starting with the rectangular room filled with people. I was told the room is always full. Occupants are all journalists, some young others well grown. The youngest looks 20+ while the eldest looks just over 50. You will appreciate that blend of youthful energetic passion with vast experience wrapped in caution. Only gender representation is imperfectly balanced. Seeing only three women in a group of over 20 journalists was not kind to the eye.

That did not ruin things. Because here I met old friends. Like, two men, I shared a newsroom with at The New Times and its sister paper IZUBA RIRASHE back in the days. It was good to see them looking like they were there for jobs that pay them. New information and communication technology has played its part to improve things. Thanks to YouTube, we no longer have people in the media who always hanged around in such places, appearing like they wanted to and could do something but did nothing. Today most have become YouTubers with own channels. Whereas a type of regulation still lurks over uncensored and unrestricted freestyle social media journalism, for now while freedom abounds, talented talkers are reaping.

This Press House is also home to the Rwanda Media Commission, the independent media self-regulatory body. The Association of Rwandan Journalists – ARJ – is housed herein as well and runs the complex, efficiently, at least from what its members attest to.

At the back end there is a Press Club. Journalists loved to have it especially when it was open all night. Here they routinely converge to playfully engage in journalistic banter, teasing each other and exchanging remarks in the friendliest of atmospheres. As a rule, these recreational chats take place over coffee, snacks, and beer in groups of convenient numbers.

During day, the busy place is the rectangular hall which works like a multi-media-outlet newsroom. The total number of computer desktops is 18, all connected to reliable internet. Almost all the journalists who come here every day have own laptops. Yet the newsroom desktops are not a luxury. All day they render the personal laptops idle. Sometimes though, they are all that there is for some journalist to do their work.

Thanks to Government. Rwanda Housing rents this three-floor house at Rwf 40m a year. The space thereof is big enough to accommodate several other media associations. These include the Association of Female Journalists (ARFM), Forum for Private Newspapers (FPN), Rwanda Sports Journalists Association, Community Radio Network and Media Impacting Communities. Rushyashya and Journale Amahoro are two of some individual newspapers who also call this place home. All utility bills are paid by government.

That is the extent to which the Kigali Administration goes in supporting the cause of private media sustainability in Rwanda. It all looks and sounds colorful on one side. There is, however, a side of checks and balance too. Practitioners are on the other hand in regular contact with authorities, engaging in conversations aimed at checking would be abusers of the goodwill and freedom.

Both sides concur that unrestricted media can offend the common good sometimes when vitriolic content is hurled carelessly. Things may verge on a clampdown. But since a purge on media, however irresponsible practitioners may be at times, would possibly be seen as an attack on society due to the inherent democratic value media holds, Government treads carefully. Journalists covet absolute liberty on one hand while on the other Governments define freedom boundaries. Seated on a round table the two sides often come up with balanced positions for inserting into laws, especially to guide speech.

It is almost a given that everybody loves free speech. And yet within free speech, offensive things will likely be said about and to people, often to their dislike. Even then, it is right that we all believe in and wish to promote free speech. As human beings, we are very proud of this principle of freedom to say things and nothings. People highly value being allowed to talk sense as well as nonsense if they may. It is an acceptable measure of democratic governance and partly defines what free society means.

Yet a question will always be asked. Where do we draw a line before it becomes harmful and offensive? The answer: It is when media incite people and carry hateful speeches that incite some people to harm others in the name of free speech. That is where a line is drawn. That is where the law must be brought to bear. And self-censorship helps too.

It becomes helpful both ways when Media does not forget that there are existing limits. If Media did not pretend that they can say whatever they want in the name of free speech, certainly the world would be a friendlier place to live in. because it is folly to assume that one can say whatever one wants, whenever, wherever. At least not in the Rwandan context, given the country’s recent history where hate speech was at the center of fermenting the Genocide against the Tutsi. With this in hindsight, those who practice free speech should strictly uphold the rule of law, exercising a high sense of responsibility.

Government of Rwanda long matured into an authority which knows well that the media will say offensive things about the job it does, and quite often. Decriminalization of general defamation and press offences a few years ago was a result of growing Government openness. Respect for people’s right to say what they want to say has been on the rise. Government cherishes accountability, and it shows.

Even then, it is important to note that for the common good, a legal line is firmly in place, beyond which people can be prosecuted for saying stuff. The law stipulates clearly when things like hateful speeches in the name of free speech will be dealt with resolutely. That is what free speech is all about anyways. Rights come along with responsibilities.

Ultimately, it is in this delicate area that both Government and Media would like to strike a balance. How responsibly will journalists exercise freedom of speech? How well they balance between creativity and self-restraint in their work for the social good is what determines the frequency of legal interventions.

A lot remains to be done, and that is a description that generally applies to sectoral growth levels for the entire Rwandan economy. Nonetheless, there has never been a better atmosphere to serve as indication that both Government and Media are mutually satisfied with the progress. Fruits of this partnership born 10 years ago have in recent years been fast ripening. And when this is happening, none of the two will be bothered by the increasingly irrelevant annual press freedom rankings by Reporters Without Boarders.

CHOGM 2021: UK Minister for Commonwealth in Rwanda to Assess Preps