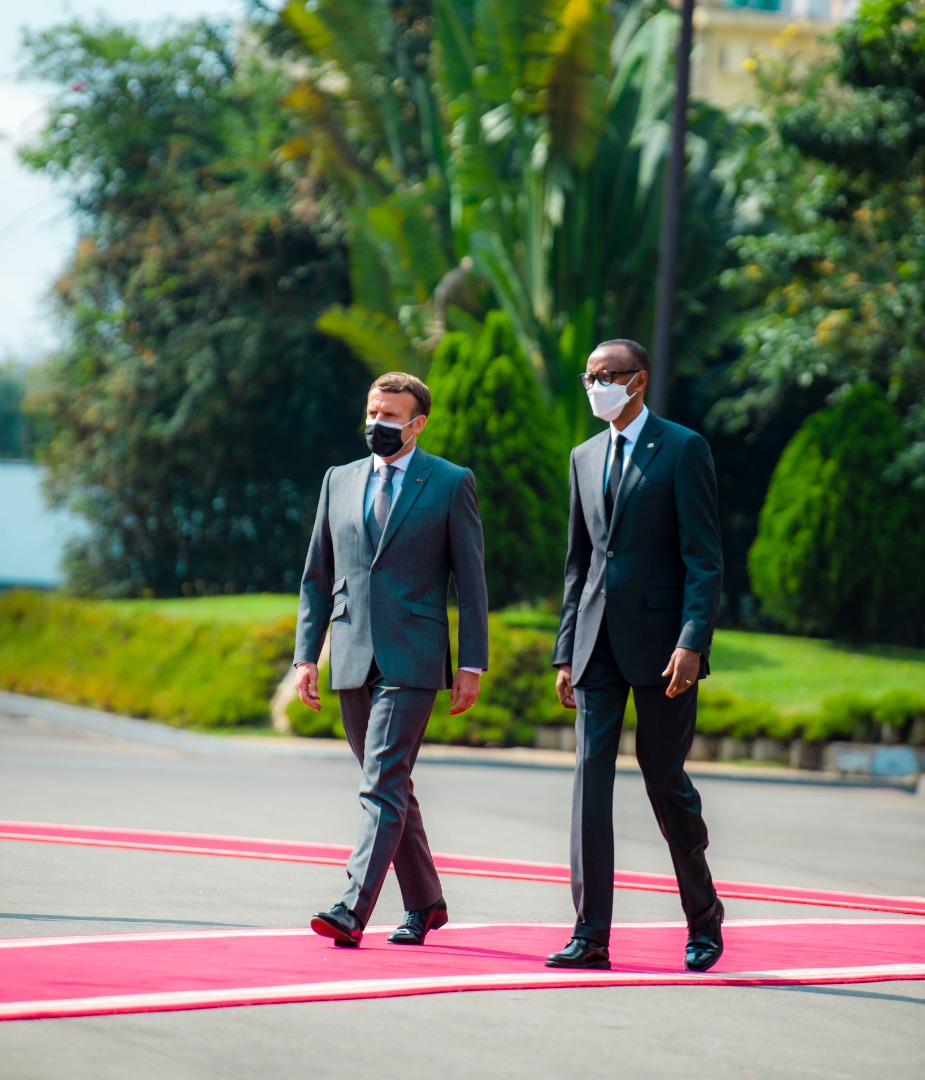 President Paul Kagame on Thursday hailed President Emmanuel Macron of France for his effort to work on relations between the two countries, pointing out that the French leader’s remarks at Kigali Genocide Memorial were much more than an apology.

The two Heads of State held talks at Village Urugwiro, after which they took time to answer questions from the press. President Kagame said that as the two countries look to put a difficult past behind them, the truth and historical clarity are of more importance than anything.

Below are is the full speech:

First, I want to welcome you, President Macron, my friend, and your delegation, to Rwanda.

Today is a moment to speak to the present and to the future, while reflecting on the past that brought us here.

The President has just made an important statement at the Kigali Genocide Memorial. This was a powerful speech, with special meaning for what is taking place now, and which will resonate well beyond Rwanda.

His words were something more valuable than an apology: they were the truth.

Speaking the truth is risky. But you do it because it is right, even when it costs you something, even when it is unpopular. Despite some loud noises and voices, President Macron took this step. Politically and morally, this was an act of tremendous courage.

These risks paid off because there was good faith on both sides. It was important not to rush the process. The facts had to be properly established. Our respective societies also needed the chance to debate and deliberate. One step led to another. And that is how we got to this point, which is itself another step, and a major one.

In Rwanda and France, so many individuals, who are too numerous to name, have kept asking questions, year after year, demanding clarity. They come from civil society, academia, and journalism. Some are simply concerned citizens. We would not be here today without their tireless efforts, and I wish to record our profound thanks and appreciation.

This is the principle upon which Rwanda’s entire project of national unity and reconciliation is based. That has been our experience as Rwandans. There is no shortcut. 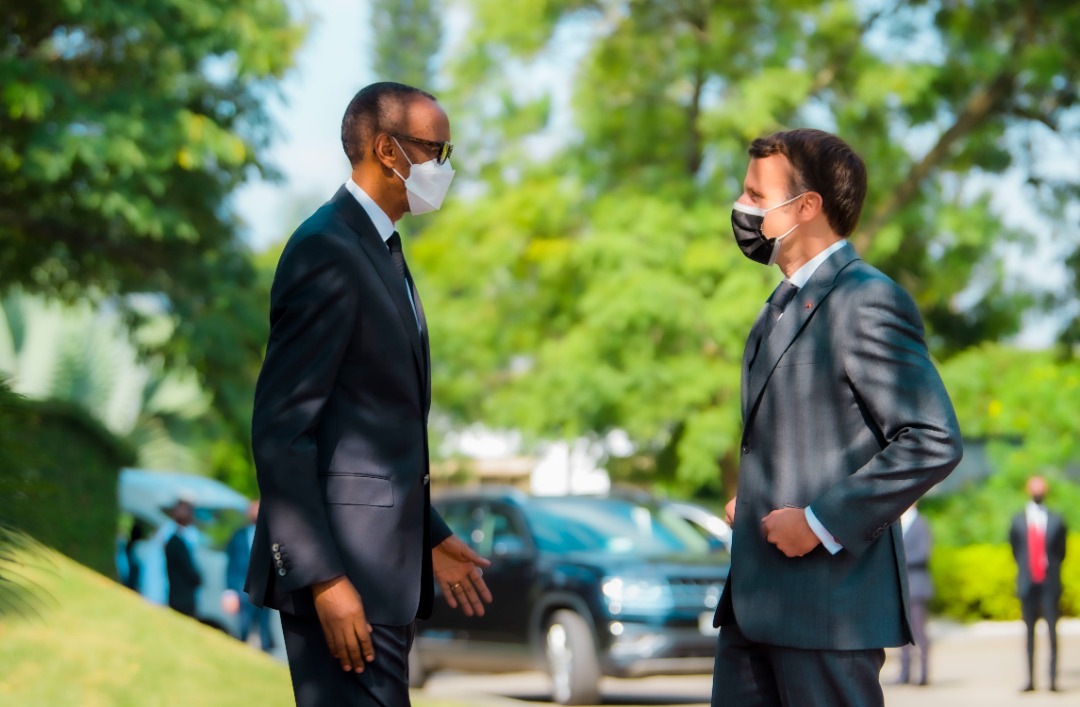 Our conviction, from the beginning, was that the process of reckoning with the role of France had to follow the same logic. And in any case, we knew it could not be harder than reconciling with ourselves.

No grain of truth has been sacrificed. But the weight of responsibility has been put back where it belongs: with those who made the decisions. Whether or not there are trials, justice is also rendered by the court of history. And the work of historical documentation must continue, jointly.

This quest for truth has occurred in the context of the complexity of the challenges that Rwanda has faced over the last 27 years. Rwanda could easily have remained a failed state. Some may even have felt vindicated by that. Others actually worked to make sure that Rwanda failed.

But we worked together as a nation to design solutions for our unique challenges. And indeed, on every dimension, including human rights, the Rwanda of today is objectively a nation transformed for the better. We continue to exist as a united people, against all odds. And we are constantly striving to be better still.

There is a way of looking at Africa, from the outside, that automatically associates every success with some huge cost in terms of fundamental values and freedoms.

This is not to say that Africa has no bad actors. It does. They are there; they may even be numerous. But no more so than everywhere else in the world. The difference is that Africa as a whole comes to be defined by those bad actors, whereas elsewhere, these bad actors are exceptions.

This assumption creates a reference point where Africa is always down, while others are up. It secures those others in the conviction that they have a natural right to do and say whatever they want in relation to Africa, to give lessons and pass judgment on our choices. Unfortunately, some of our own in Africa also participate in this negative enterprise. 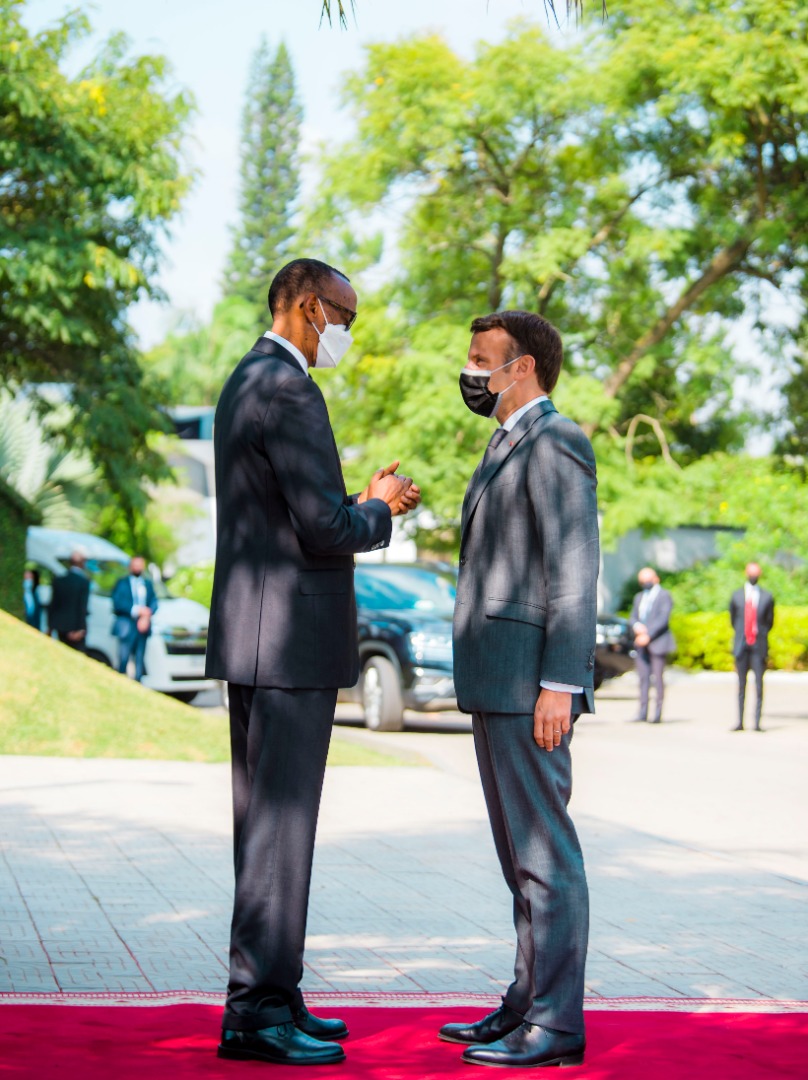 The dynamic goes on almost forever, as if it is unstoppable or inevitable. But it is not. You stop it by doing what you believe is right, and which, in the end, may indeed prove to be right.

The veneer of moral superiority is very thin, once you start to scrape at it. Beneath it hides racism, a denial of the intrinsic and equal worth of every human being. It was racism that made a foreseeable genocide in Africa seem tolerable.

There are attitudes inherited from the past that have needed to change, for a long time. And I want to say that President Macron is among those who realised that things need to change, and he is taking a strong stand in trying to bring about that change.

It is not about speaking on Africa’s behalf, but rather ensuring that the voices of Rwandans and Africans can join together with the rest of the world in pursuit of common objectives, irrespective of where we come from.

President Macron is someone who listens, and he is committed to supporting Africa based on what Africa itself has chosen. This is different, it is better, and it can last. Fundamentally, this visit is about the future, not the past. 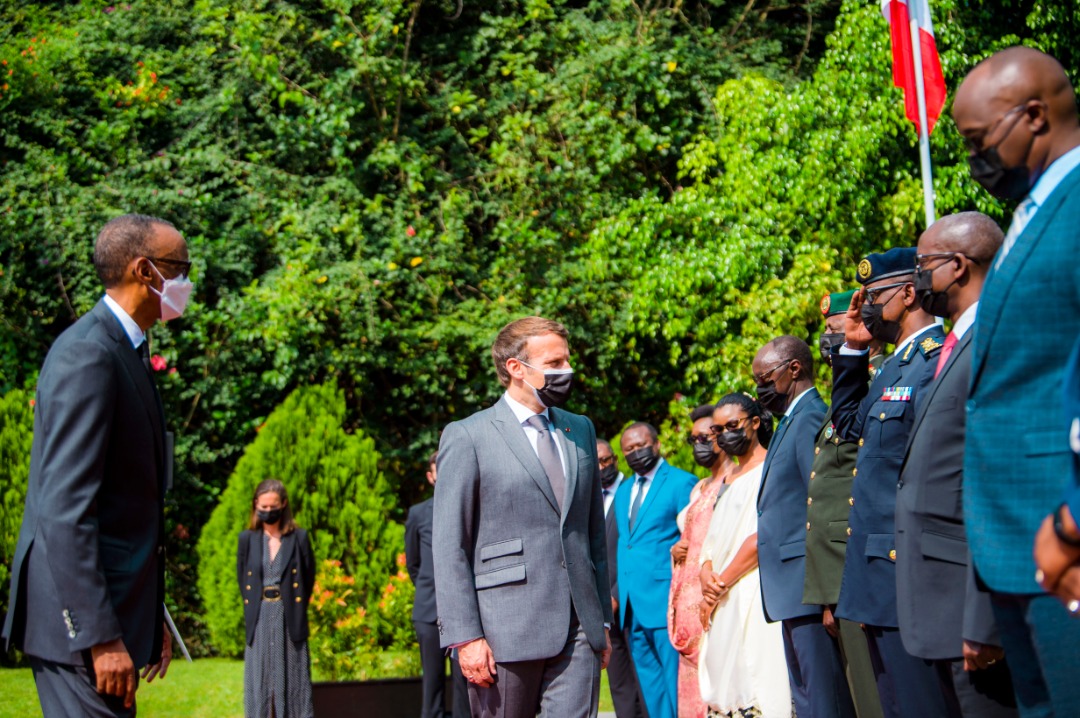 France and Rwanda are going to relate much better, to the benefit of both our peoples, economically, politically, and in terms of culture.

But the relationship between our two countries will never be entirely conventional. There is a special familiarity resulting from the complex and terrible history we share, for better or for worse. We have chosen to make it for the better.

We wish to form a strong and sustainable relationship, based on priorities that matter to both Rwanda and France.

This includes many of the items discussed in our bilateral meeting today, such as investment, digitisation, gender equality, climate change, cultural exchange, and support for entrepreneurship, small businesses, start-ups, and especially youth empowerment. Rwanda shall be a strong partner in all of these areas.

Mr President, I once against thank you and your delegation for being with us here today. I thank everyone who is here for your kind attention. I now invite my friend President Macron to make his statement, and then we will be happy to take your questions. 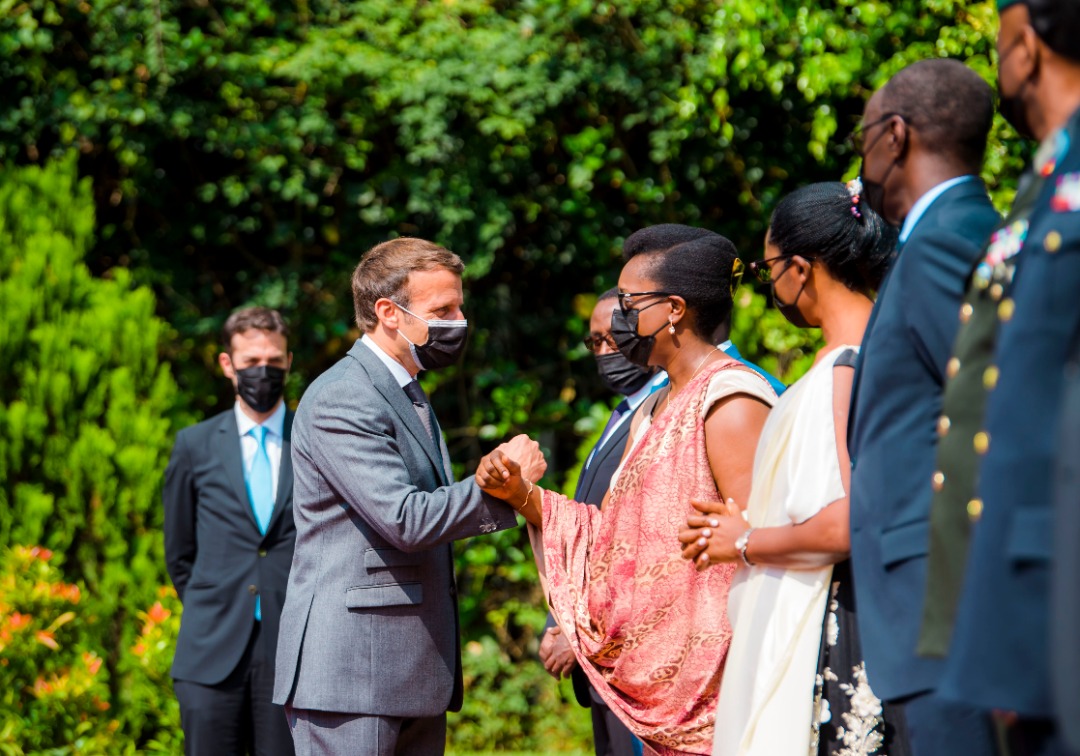 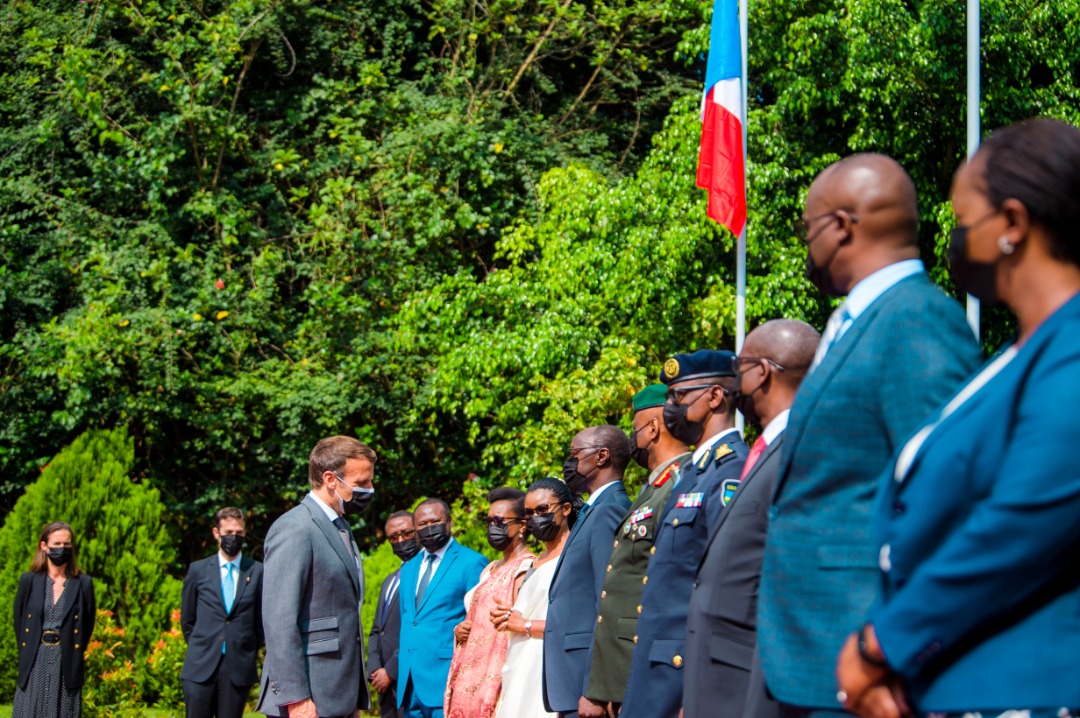 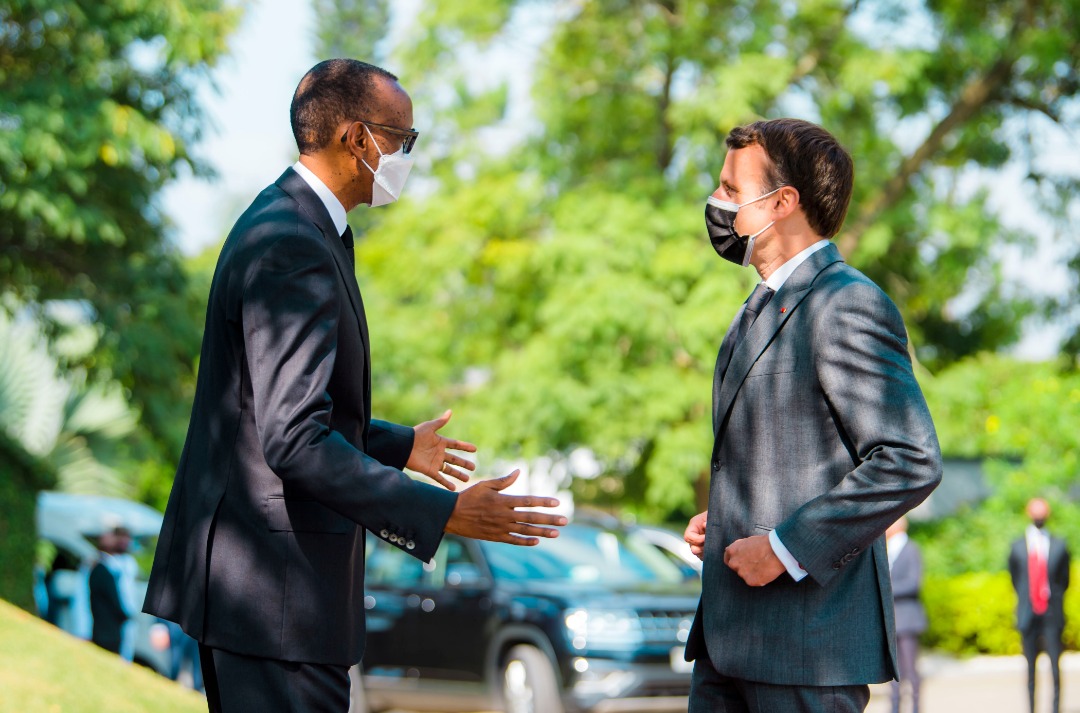 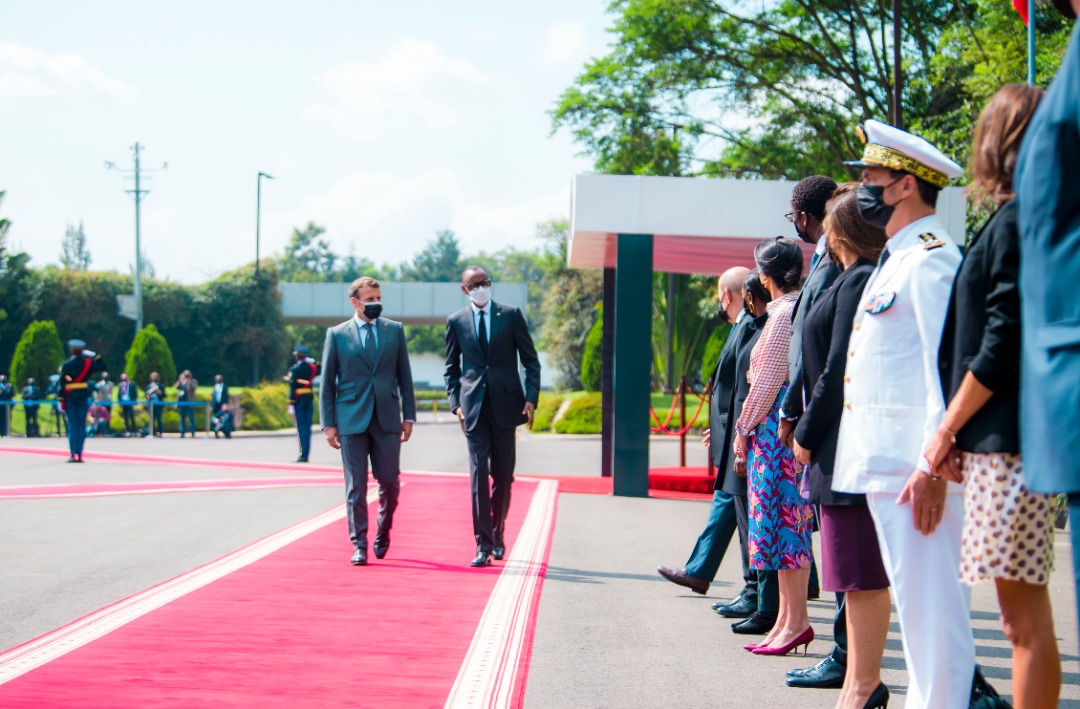 Macron Acknowledges Responsibility of France in Genocide Against Tutsi, Apologizes