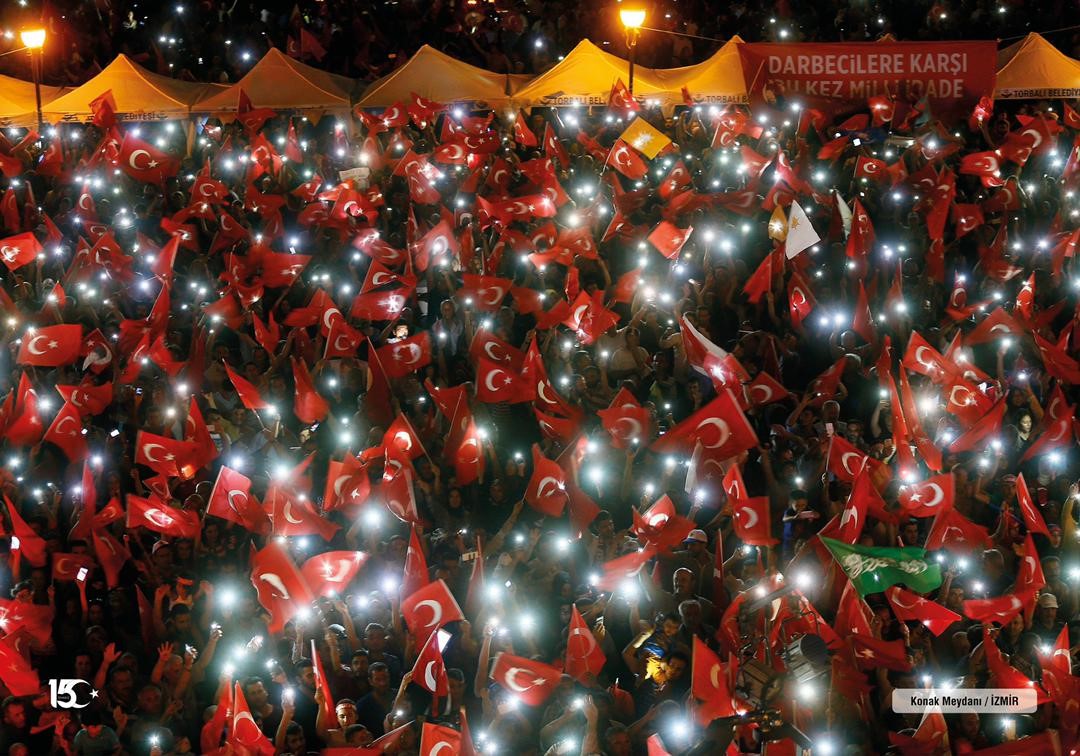 15 July 2016 is engraved in the history of Turkey as one of the turning points of its democracy. 5 years have passed since the 15th of July coup attempt was orchestrated by “Fetullah Gulen Terrorist Organization” (FETO). 15 July is commemorated as “Democracy and National Unity Day” in Turkey in remembrance of this attempt and in paying tribute to the Turkish civilians, 251 of whom lost their lives while defending the democratic constitutional order.

On that historic night, Turkish civilians and the top brass of the Turkish military who profoundly believed in democracy and rule of law stood united against the coup attempt that was planned by FETO leadership and carried out by members of the organization whom had infiltrated into our army. This heinous act constitutes the deadliest terrorist attack that Turkey has ever experienced.

Defending Turkish democracy against obscurantism and the reign of terror attempted to be imposed by FETO came with a cost of two hundred and fifty one lives of our fellow citizens and more than two thousand injured. Turkish people who have stood against this horrific threat have fervently and courageously demonstrated to the world that they did not recognize any power over their will and stood ready to sacrifice their lives to protect their State and the democratic system.

Until the long dawn of 16 July 2016, FETO terrorists bombarded Turkish Parliament, the Presidential Palace, and the strategic buildings such as police and intelligence headquarters by fighter jets that they hijacked. Moreover, plotters had attempted to assassinate the elected leader of Turkey, the President of the Republic, Recep Tayyip Erdoğan and other senior Turkish officials with the deliberate intention to seize the state apparatus. Tanks were driven to the streets to mow down innocent civilians, while helicopters and jets dropped bombs from the air and shot everyone in sight. The Fetullahist traitors disguised as soldiers did not shy away from bombing the innocent people. It has not been possible to reach the bodies of fifty-one police officers who were martyred due to intense bombing that targeted the Police Special Operations Department Headquarters. We have never witnessed such savagery and treachery in our history.

The 15th of July coup attempt revealed the grave threat posed by FETO terrorist organization against our State. In order to fully grasp all aspects of this coup attempt, it is imperative to have a closer look at this dark network, beginning from schools and prep schools established over the last few decades by FETO. By brainwashing young minds at schools founded under the disguise of so-called training activities, they indoctrinated a large group of radical followers. The ultimate aim of this process was to create loyal “clique” who carried out instructions of the organization without questioning.

Graduates of these schools were, undoubtedly, used like Trojan Horse to infiltrate institutions of the State which are of utmost significance like army, judiciary, education by employing criminal methods including all kinds of forgery in the exams. These conspiracies and methods were used as an intriguing instrument to substitute their members to the key positions within the government and state organs in order to pave the way to confiscate Turkish state. FETO strengthened its economic and political influence by abusing the State’s resources and authority for the vile interests of the organization.

No matter how ambitious it was, FETO failed at the night of 15 July 2016 while trying to overthrow an elected government with a bloody coup attempt, simply because it miscalculated the strong resistance of the ordinary Turkish civilians who shielded their bodies against the tanks and bombs that night. It was such a miserable and positively medieval bid for those who still aspire to victimize themselves in the perception of international public opinion. Turkey remains determined in its commitment to take all necessary measures to protect its democracy and existence in line with principles of the rule of law and fundamental rights and freedoms.

FETO has undergone a significant transformation. The organization, which lost its backbone in Turkey, is now trying to survive by making use of its structure abroad. FETO and its network are still present in many countries. By mobilizing its remaining resources, its tentacles reach far and wide, exploiting poverty, fear, democratic deficits, and corruption in the countries that they stayed. FETO network continues to run a range of big and small business enterprises, schools, hospitals, and it furthermore tries to make profit from shady business transactions. FETO poses a threat to the security of other countries where it remains active.

As countries begin closer monitoring and investigation of the activities of this organization, the international community gradually understands that FETO is not a social movement that engages with education and charity, contrary to the way it tries to portray itself, but rather a dark and insidious organization with political and economic ambitions.

Various countries and international organizations have already declared FETO as a terrorist organization. Turkey is grateful for the collaboration of its partners and friends in this respect and looks forward to further cooperation from international community in overcoming this terrorist threat.

The Writer is H.E. Burcu Cevik, Ambassador of Turkey to Rwanda