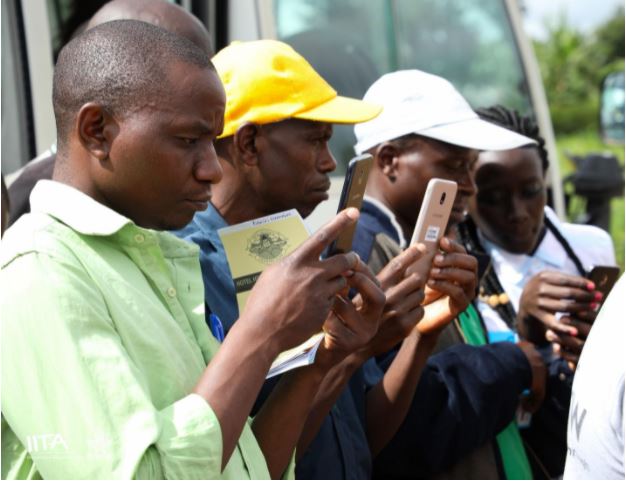 Etienne Hakizimana, a Farmer Promoter from Rusizi district, Western Province is one of the Farmer Promoters, working with ICT4BXW project to scale up the use of digital tools such as BXW App and non digital tools mainly USSD, SMS, chatbot to curb the Banana Xanthomonas Wilt (BXW) disease in banana plantations in Rwanda.

He describes BXW as a threat to banana farming and productivity, since its first occurrence in his banana plantation.

However, he said that BXW App is an adequate solution to fight the disease and thus helping to improve banana farming.

“It was not easy to identify BXW symptoms on banana plant. We confused it with fusarium wilt or any other banana disease that show similar symptoms like wilting of leaves and rotting,” Hakizimana said.

“After the introduction of BXW App, I am now capable to clearly diagnose BXW disease on banana plants, through photos and video that showcase the actual signs of the disease. The App provides tangible remedy to curb the spread of the disease, such as the Single Diseased-Stem Removal technique.”

A recent survey done by Viamo, one of the ICT4BXW project partners, demonstrates that more than 89% of banana farmers find BXW disease as the most devastating disease that affects banana production in Rwanda.

Moreover, 87% of the banana farmers who contributed to the survey, agree that digital tools can help farmers increase banana productivity.

The Team and partners have developed, piloted, and deployed digital tools for surveillance and control of banana diseases in Rwanda, including a smartphone-based android application called the BXW App.

The project’s first phase (2018–2020) focused on co-development and co-validation of this smartphone-based tool with various stakeholders and partners, including Farmer Promoters and RAB’s Banana Team.

BXW App has multiple functions, including information about BXW threat, a stepwise module for standardized diagnosis of BXW incidence, and best management and control of the disease.

The App is a stepwise digital approach that guides farmers, farmer promoters, and other users to diagnose and control BXW in banana plantations

Following successful co-validation of the BXW App, the ICT4BXW project progressed into the second phase of implementation (2021–2023) to disseminate the BXW App nationally and diversify the reach of the tool’s multiple functions in digital and non-digital forms.

This phase aims to reach 250,000 farmers and extension delivery personnel (including Farmer Promoters) across the country, empowering them with relevant decision-support knowledge and tools to control BXW disease and implement the best banana management practices.

To encourage access to the BXW App and other tools (such as Extension Remote Training and Banana Agronomy Guide), RAB and IITA equipped 150 farmer promoters and RAB Technicians with smartphones and training to inspire and mentor their peers (and farmers) for broader tool adoption.

This cohort of farmer promoters, designated as “Scaling Champions,” were selected across 25 Districts of Rwanda based on a systematic survey that assessed their existing basic digital skills such as using a smartphone and level of literacy.

Before receiving the smartphones, the Scaling Champions were trained to use the BXW App and understand their critical role as mentors for their peers, designated as (Scaling Enablers), with major responsibility towards banana farmers within their respective villages.

Each Scaling Champion is to train and mentor between 7 and 9 Scaling Enablers on using the BXW App in their banana farming. They will report monthly on progress, including the number of farmers who used the BXW App to diagnose and monitor BXW disease in their banana fields. The report will automatically be channeled into RAB’s system to support policy engagement and decision-making to improve banana farming in Rwanda.

Additionally, Scaling Champions will be engaged and progressively incentivized for nine months to maximize their support to scaling enablers.

You can find more details about the BXW-App on https://www.ict4bxw.com/

Mashariki Film Festival Is Back