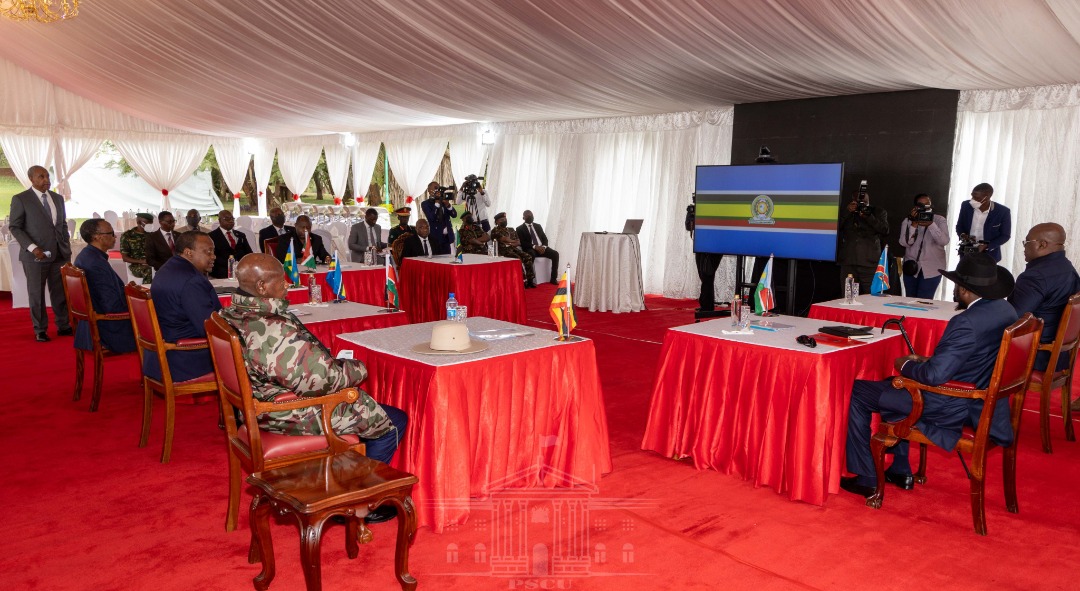 EAC Leaders convened in Nairobi to discuss the security situation in the region.

Leaders of the East African Community (EAC) have called for an immediate cessation of hostilities in the eastern part of the Democratic Republic of Congo (DRC) and agreed on the modalities of the deployment of a joint force.

The Heads of State, who met in Nairobi, Kenya on Monday, for the 3rd EAC Heads of State Conclave on Inter-Congolese Dialogue of the Nairobi Process, convened by President Uhuru Kenyatta agreed to move quickly towards finding a lasting solution to the situation in DRC, which is threatening regional security.

According to a communique from the meeting at State House Nairobi, attended by Presidents Paul Kagame of Rwanda, Yoweri Museveni of Uganda, Evariste Ndayishimiye of Burundi, Salva Kiir Mayardit of South Sudan and Felix Antoine Tshisekedi of DR Congo, a roadmap to follow was agreed upon by all parties.

At the meeting, the leaders committed to contribute to reconciliation and lasting peace and determined to find a swift and lasting solution to the conflict in the DRC, particularly in the North and South Kivu as well as Ituri Provinces.

It adds that the leaders appreciated the supremacy of the Constitution of the DRC and committed to maintain a unified and secure country, with coherence and credible institutions of central government exercising full territorial authority and recognizing that peaceful means are the best way to resolve conflicts.

The communique said the Conclave commenced with a detailed brief on the military track, presented by the Chief of Defence Forces of Kenya, General Robert Kibochi, in his capacity as the Chairman of the Committee of East African Community Chiefs of Defence Forces. 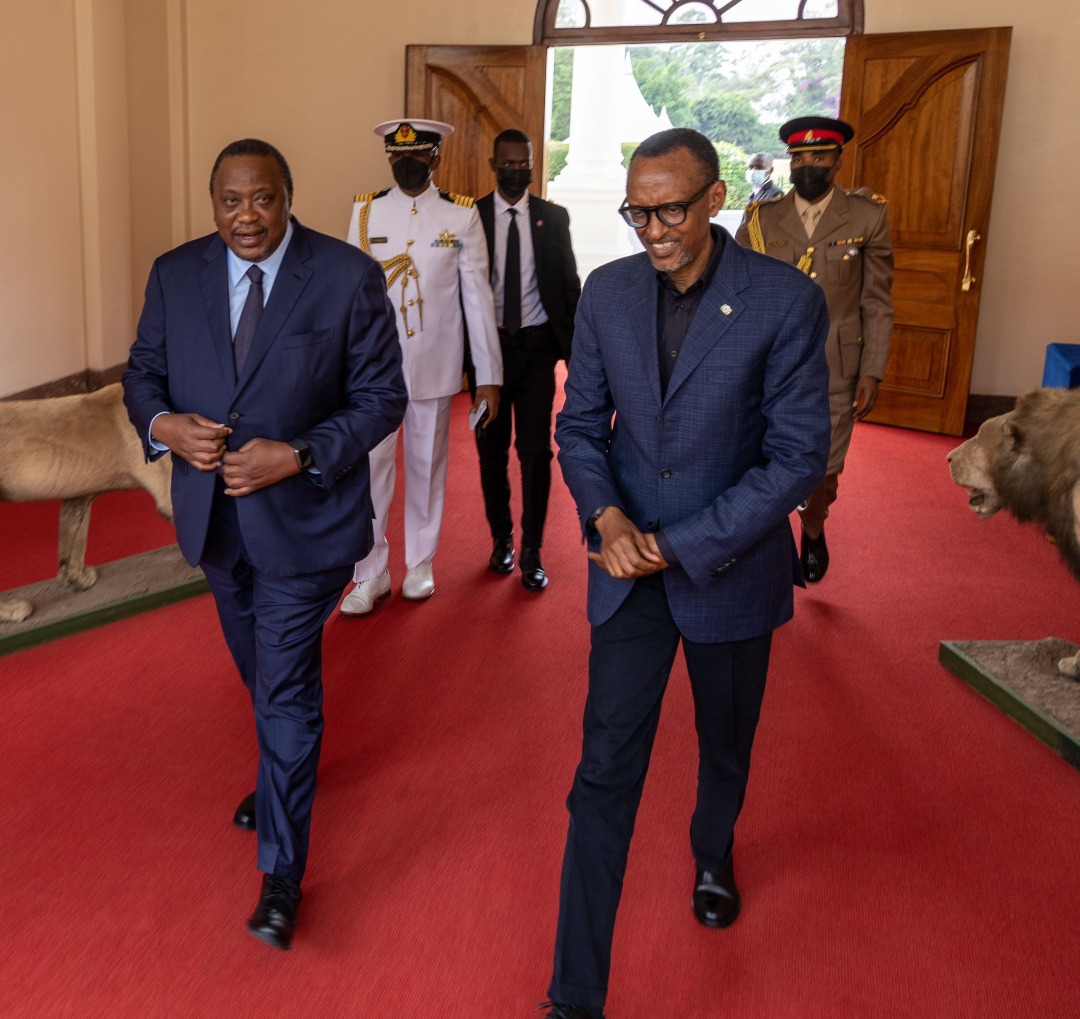 The brief defined the problem, highlighted the threat analysis, Concept of Operations (CONOPs), Status of Forces Agreement (SOFA), Rules of Engagement (ROE) and other legal and technical regulations to facilitate the operationalization of the Regional Force and its various operational arms.

The Heads of State accepted and adopted the CONOPs, SOFA and ROE as presented by the Chiefs of Defence Forces for immediate implementation.

“In doing so, the Heads of State instructed that the Regional Force should, in cooperation with the military and administrative forces of the DRC, seek to stabilize and secure the peace an in the DRC,”

“The Regional Force should also cooperate in implementation of the disarmament and demobilization process,” it reads.

The leaders further agreed that the regional force will be constituted as an East African Community force under the EAC Protocol on Peace and Security and the EAC Treaty Article 124 on regional peace and security and Article 125 on cooperation in defence.

The Conclave received a written brief on the political track of the Nairobi process which detailed actions and activities that have been undertaken since the last convening of the second Conclave including the convening of the consultations with various armed and rebel groups within the DRC as a follow up to the consultations undertaken by the DRC with the rebel groups in Nairobi.

The Heads of State directed that an immediate ceasefire should be enforced and cessation of hostilities should commence immediately, including withdrawal from recently taken positions.

“In doing so, the political process should be intensified by all parties in order to allow the citizens of the DRC to feel safe and secure and be able to pick up and continue their respective social, cultural and economic activities.

The conclave agreed and reinforced that trust and confidence-building, cessation of hostilities, unconditional ceasefire, participation in the political processes in the

country, prioritization and participation in the country’s development, citizenship, presence of foreign negative elements, fate of combatants during reintegration and status of refugees and internally displaced persons are among critical issues that require concerted, urgent and durable resolution.

The leaders also condemned hate speech and threats of Genocide recently seen, esepcially in DRC, of officials and individuals inciting hate against Rwandans and Kinyarwanda-speaking communities of DRC.

“The Heads of State also emphasized that all offensive language, hate speech, threats of genocide and other politically inciting language must cease and must be discouraged by all parties and that the people of the DRC must be encouraged to work together in order to stabilize the eastern DRC for it to prosper.”

At the close of the conclave President Salva Kiir Mayardit took the opportunity to brief the meeting on the most recent and important developments in the political process in South Sudan.

The leaders thanked President Uhuru Kenyatta for his convening and hosting of the third Conclave and thanked President Felix Antoine Tshisekedi Tshilombo for taking the regional route in his determination to resolve the peace and security situation in the east of the DRC.

President Samia Suluhu Hassan of the United Republic of Tanzania was represented at the meeting by the country’s ambassador to Kenya, John Stephen Simbachawene.

President Kenyatta hosted the high-level meeting on the Peace and Security Situation in Eastern DR Congo in his capacity as the Co-Convenor of the Peace Process and Chairperson of the East African Community.

Last week, Rwanda said it was ready to make its contribution towards the operationalisation of the joint force.

All Meetings and No Play? Kigali People’s Festival Is the Place to Go