Home NewsNational Dilapidated Toilet or None: Who Is Who?
National 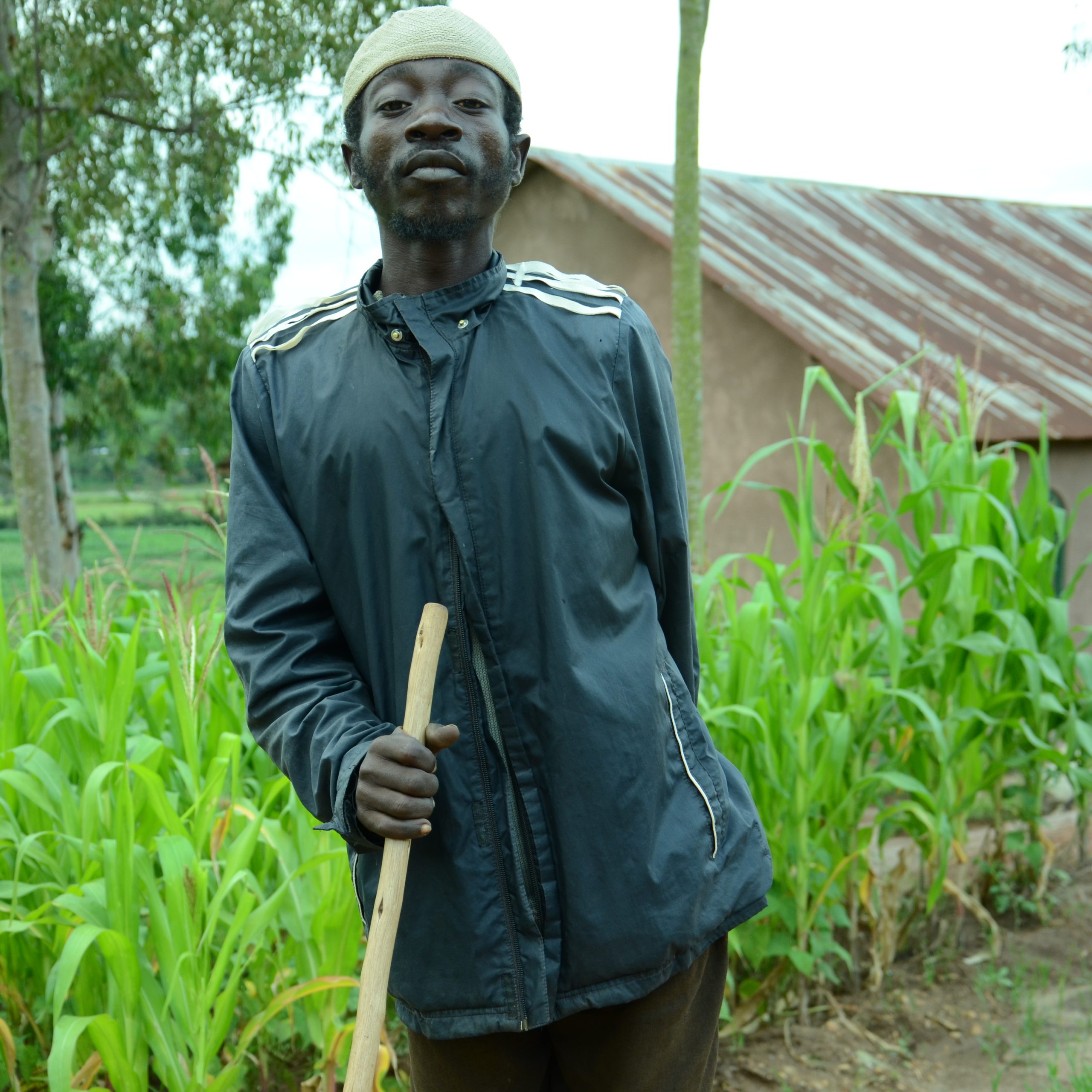 On a hot Saturday afternoon while walking through remote Gakunyu village in Gatsibo district, the body demands that I must answer nature’s call.

About 30 meters away, I notice a man seated under a tree shielding away from the scorching sun in front of a mud wall house.

I branch off to meet and greet him and ask him to help me use his toilet. He suddenly removes his cigarette, holding smoke in his mouth while looking at me for a few seconds.

Puffing out the smoke he said: “I don’t have a toilet” and he pointed to a nearby church saying: ‘You can go over there and use the toilet there, it is what I also use.”

Murwanashyaka 39, lives a very isolated life as a person with disability who suffered polio which crippled his legs as a child but is very friendly.

He struggles to walk with the support of a stick and it takes him almost 30 minutes to walk to the church to use its toilets.

More than a decade ago, he was chosen among four people in his village to receive government support and through the Kiziguro sector, the government allocated a small plot of land to him.

A mud brick tin roofed house was built for him, but on top of this, he was meant to have a 5000-litre tank to harvest rainwater, a ventilated pit latrine and a stand-alone kitchen as part of the package.

This didn’t happen. The house was supposed to have cement plastered walls and a concrete floor inside.

Murwanashyaka says that he was handed a house without doors, windows, not plastered and not floored. There was no toilet.

“I struggle walking to the nearby church and using their toilet. But before the church was built, I would use the nearby bush. With my physical disability it is impossible to fetch water from the far away swamp which is the only source of water,” he said.

Murwanashyaka is one of the 31% Rwandans who don’t have toilets.

According to United Nations Child Agency (UNICEF) and World Health Organisation (WHO) progress on household drinking water, sanitation and hygiene 2000-2020 JMP report, 1.7 billion people in the world – more than one in five – do not have a decent toilet of their own.

This shows just how far behind the world is on its promise to ensure all people have access to safely managed sanitation, that is a decent toilet linked to waste treatment by 2030.

Lack of decent toilets takes away from people’s sense of dignity and poses health risks to communities. Eliminating open defecation and ensuring people have access to decent toilets is critical, if developing countries hope to achieve SDG target 6.2.

A further breakdown of statistics shows that, in the East African region, only 69% of Rwandan population has basic access to toilets; compared to 30% for Tanzania, 9% in Ethiopia and 20% in Uganda.

Walking through the Kiziguro sector neighbourhood, it is noticeable that there are other homes without toilets while  some others have toilets without roofs.

Shumbusho 26, who lives with wife and child in Gakunyu village has a toilet but it lacks a roof and door. He uses a tissue of a bag to cover the toilet entrance but when it rains he has to be patient until it stops raining. 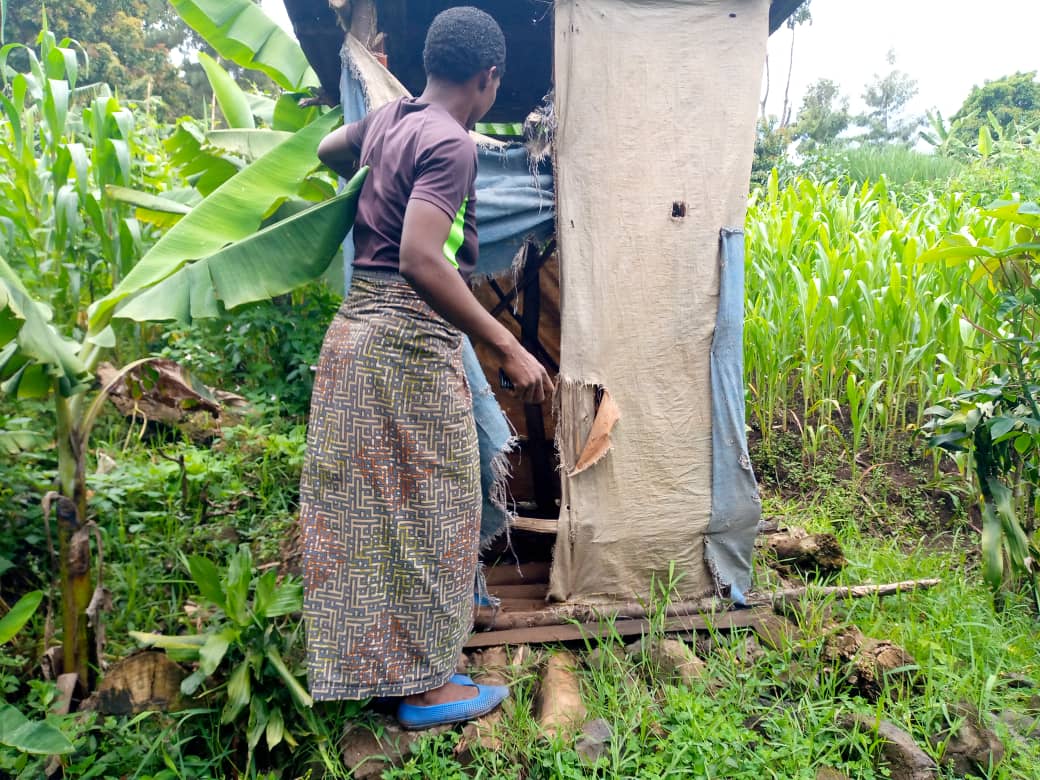 In the volcanic mountains of Musanze district, people with their limited resources, managed to construct makeshift toilets but the problem of poor sanitation is visible as residents cannot dig 5- meter toilets because of the rocky terrain.

“This means we have to dig in another place and the cycle goes on, making it hard for a person to use the toilet and resulting in poor hygiene and land wastage,” said Yohana Kubwimana, a young man.

“We would wish to have mobile toilets because these toilets are not deep enough and fill up faster on this terrain,” said Grace Mukamana, an older lady.

This problem is shared in the villages surrounding the volcanic mountains.

In Ngoma market, Ngoma district there are more than 400 residents who trade in the public market per day and are served with two latrines.

Traders complain about the lack of toilets in the main market located in Kibungo sector, saying that it is a serious problem because they are threatened by potential disease and pollution from stench and filled up public toilets.

Rwanda is committed to achieving 100% access to basic sanitation and hand washing facilities by 2024 and development partners are playing their role to attain this target though most are limited by budget and manpower.

Rwanda Governance Board (RGB) annual report 2021/2022 show $37,636,345 was used by 39 international organisations to intervene in hygiene and sanitation activities.

To sustain this, UNICEF Rwanda says that partnering with a business enterprise to create social impact using this social corporate business model needs the local private sector to come up with ideas which can be supported but also with a commercial perspective.

For instance, this model has availed 20,000 toilets in 17 districts and is currently installing similar toilets and upgrading open pit toilets in schools through the School Toilets Enhancement Program (STEP).

According to WHO poor sanitation is a major contributor to groundwater degradation, it is also linked to transmission of diarrheal diseases such as cholera and dysentery, as well as typhoid, intestinal worm infections, polio, trachoma etc.

Poor sanitation contributes massively to stunting and mortality in children especially those in developing countries.  It also contributes to the spread of antimicrobial resistance.

In Nyamagabe district, school’s officials say that they got support from WaterAid Rwanda in improving access to water and creating student’s clubs which educate and produce their own soaps to help to maintain hygiene in toilets without spending much.

Noel Barankiritse, the Headmaster of Kigeme B School (refugee camp school with 105 toilets) says WaterAid Rwanda has trained its staff and over 2,700 students who have won district competitions in hygiene.

Through the involvement of key sanitation influencers and with the support of opinion leaders and district staff (in 10 districts), Isoko y’Ubuzima project under Water for People Rwanda, has rolled out Social Behavior Change (SBC) initiatives and demand creation strategy at the community level to change sanitation practices for members of the community.

This strategy and initiatives came through the delivery of behavior change messages, sales and marketing on sanitation and hygiene products in community groups, household visits, and linking the community with district sanitation centers, showrooms, and financial mechanisms.

The mobilization effort reached over 44,000 members, of which 5,587 gained access to basic sanitation and hygiene services. This included over 1,100 households that constructed or improved their toilets.

As the world commemorates World Toilet Day, on November 19, 2022, it is important that stakeholders continue to prioritise access to decent toilets, especially for people who are vulnerable. Governments need to quadruple current effort to ensure SDG 6.2 is achieved by 2030.

This year’s theme focuses on the impact of the sanitation crisis on groundwater, and this further reinforces the far-reaching impact of poor sanitation and open defecation on communities, as groundwater accounts for approximately 99 per cent of all liquid freshwater on earth. Safely managed sanitation for everyone is the way to protect water bodies from human waste pollution.

Ministry of Agriculture ‘Proud’ of Trainees In Vocational Education