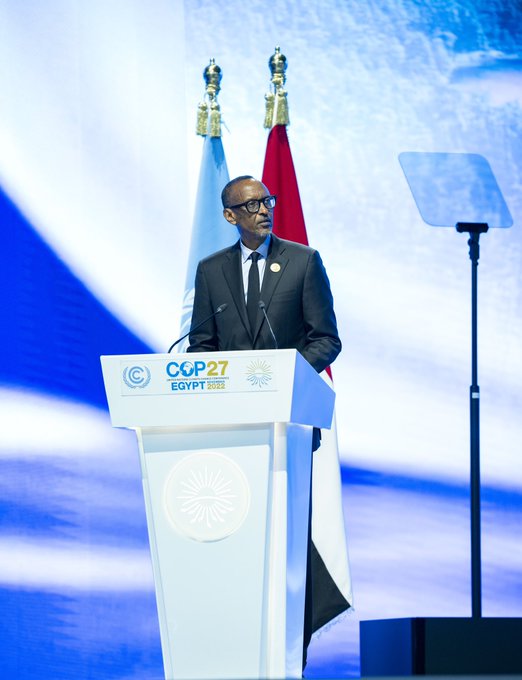 President Paul Kagame has said that in order to attain a sustainable future in the face of climate change, the first step should be cutting emissions and not generating carbon credits for others to continue to using fossil fuels and coal.

Kagame made the remarks on November 8, while addressing the 27th United Nations Climate Conference (COP27) taking place in Egypt.

Kagame said that the findings of the Sixth Intergovernmental Panel on Climate Change show that a more sustainable future remains within reach but there is little sense of urgency in taking action on already evidenced damage of global warming which will soon become irreversible.

To move forward, Kagame said that Rwanda, like many African countries, is ready to prioritize shifting to use renewable energy to save their own future, but this doesn’t match with what developed countries are doing.

“The point is not to generate carbon credits, so that others can continue using coal, even as Africa is discouraged from exploiting its fossil fuel resources,” Kagame said.

“The most valuable contribution that developed countries can make is to reduce their emissions faster, while investing with Africa to build sustainable green power”.

A new Africa Carbon Markets Initiative (ACMI) was inaugurated at COP 27, aimed to support the growth of carbon credit production and to create jobs in Africa.

African countries at the COP27 have called for investment in climate financing and damages based on the fact that Africa is the lowest emitter of carbons (less than 4%) yet facing the impact of global warming caused by other large emitters- who doubt whether Africa is in position to use the financing.

In response to this debate, Kagame said that the question of whether Africa is ready to make use of climate finance should not be used as an excuse to justify inaction and vulnerable nations (coming out of the pandemic) cannot rely on external financing alone but public private partnerships.

“This is why Rwanda has launched Ireme Invest, a new green investment facility, with over $100 million from domestic and international partners,” Kagame said.

Rwanda’s newly created Green Investment Facility which is solely dedicated to financing private investors’ green projects is expected to create 367,000 jobs and the local private sector will start to benefit from the fund from early 2023.

Kagame used the opportunity to reaffirm Rwanda’s commitment to inclusive and transparent negotiations for a green and climate-resilient future and also congratulated all countries that have ratified the Kigali Amendment to the Montréal Protocol, most recently the United States, and encouraged others to do likewise.