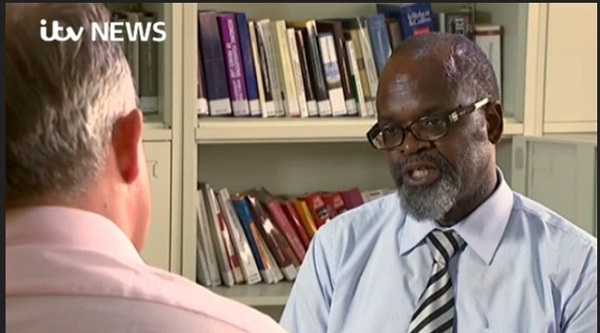 Do they know who is Jean Kambanda is?

Jean Kambanda was the Prime Minister of the genocidal government which planned and executed the genocide committed against the Tutsi in 1994.

On May 1, 1998, Kambanda pleaded guilty of alleged six charges.

The ICTR Trial Chamber sentenced him to life imprisonment after his voluntary guilty plea together with overwhelming evidences for his role in the genocide.

Jean Kambanda later appealed the sentence on claims that his plea was not voluntary. After hearing his appeal, the Appeals Chamber however, concluded that the guilty plea was voluntary, informed and unequivocal and thus upheld the sentence.

The chamber also affirmed that the crimes for which the Appellant was convicted were of the most serious nature therefore, a sentence imposed should reflect the inherent gravity of the criminal conduct.

Below is an excerpt from the verdict:

In sentencing the Appellant, the Trial Chamber found that

(v) the crimes for which Jean Kambanda is responsible carry an intrinsic gravity, and their widespread, atrocious and systematic character is particularly shocking to the human conscience;

(vi) Jean Kambanda committed the crimes knowingly and with premeditation;

(vii) and, moreover, Jean Kambanda, as Prime Minister of Rwanda was entrusted with the duty and authority to protect the population and he abused this trust.

It was on this basis that the Appeals Chamber upheld Kambanda’s sentence.

The decision to have Kambanda sent to Mali to serve his jail term came into effect after an Agreement between the government of the Republic of Mali and the United Nations in February 1999.

In the article and corresponding video by John Ray, Kambanda is presented with numerous opportunities to voice his denialist prerogative on the genocide against the Tutsi.

In that video, the journalist presents Kambanda in his suit attire with a smiling face in an attempt to

portray him as an ordinary person, and not a genocidal criminal serving his sentence.

In the interview, John Ray asks Jean Kambanda some questions that provide answers that are well predetermined in order to assert his denialist agenda.

The methodology was used to disseminate and distort the known truth about the genocide against the Tutsi.

In the interview also, Kambanda states that he didn’t play any role in the genocide and his conscience is clear.

He further denies having supplied weapons to killers, but according to him the weapons were provided for people to defend themselves.

However, the statements contradict what he pleaded guilty voluntarily before both the Trial Chamber and Appeals Chamber of the ICTR.

Supply of weapons that was claimed by Kambanda for self-defense was one of the strategies that were used by the genocidal regime to provide weapons to militias in what was known as “auto-defense civile” (civil self-defense).

ICTR concluded that auto-defense civile was one of the strategies used to kill Tutsis in the trial of Colonel Aloys Simba, who was the head of the program on the national level.

He was convicted by ICTR and held a 25-year jail sentence.

In the interview, Kambanda disputes the reality of the current reconciliation where he calls it a mirage.

However, this contracts the reality of the situation in Rwanda which is indicated in various reports by national and international bodies.

The reality of Rwanda’s reconciliation process can be obtained by visiting the country and asking the people experiencing it and through various reports by credible institutions, not from Jean Kambanda, the mastermind of the genocide.

The content of the article in its entirety lacks objectivity which should characterize professional journalism that otherwise should be truthfully, verifiable and not one-sided.

In his article, John Ray produced multitude of biased and unrelated stories that are presented as facts:

It is evident that John Ray is a one-sided plea for the defense of the convicted genocide.

International media denying the genocide against the Tutsi

The ITV News article is not alone in its promotion of genocide denial. Over the last couple of years there has been a sequence of articles, reports and documentaries from foreign media agencies, such as the BBC2, Canal+, France 2 and RFI with a predetermined agenda to shift the responsibility from authors of genocide to victims.

In the same line, the well-known genocide negationist Stephen W. Smith, published an article in The New York Times on July 19, 2015 titled War Crimes and Rwandan Realities, where the writer raises a double-genocide rhetoric by alleging the Rwanda Defence Forces of having committed “genocide”, basing on the falsified UN Mapping Report.

We can recall that Mr. Smith is a former journalist in Liberation and Le Monde who worked closely with French judge Jean-Louis Bruguière, who was the pioneer in falsely indicting Rwanda Defense Forces (RDF) high ranking officials.

This convergence of false publications on Rwanda shows a perpetual intent by the international media to deny the genocide against the Tutsi and to tarnish the image of the Rwandan government.

Similar to the above mentioned media outlets; John Ray and the ITV News are responsible for publicizing the propaganda of genocide denial.

Even though the standard minimum rules for the Treatment of Prisoners (Resolution 663C (XXIV) of July 31, 1957 and 2067 (LXII) of May 13, 1977, the Body of Principles for the protection of all persons under any form of detention or Imprisonment and the Basic Principles for the Treatment of Prisoners Res 45/111 of December 14, 1990) provides them with some rights, it inhibits them from accessing platform to influence the public negatively.

The agreement between the government of the Republic of Mali and the United Nations, which was signed in Februarly 12, 1999 doesn’t allow ICTR genocide convicts to be given a platform in media to deny the crimes, which they were convicted by ICTR and for which they’re imprisoned. 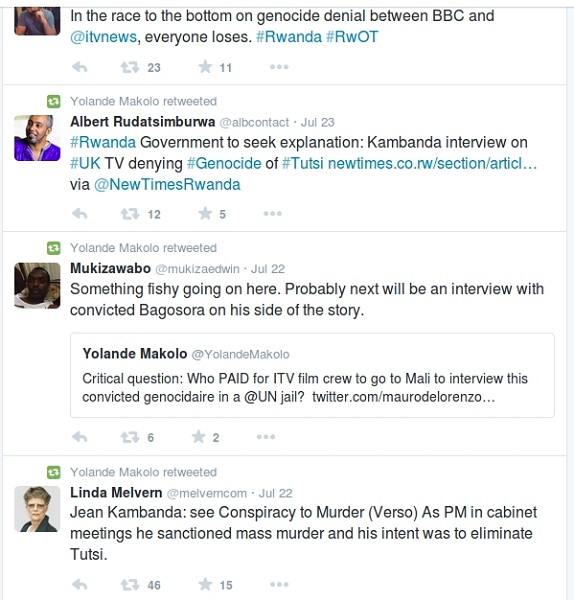 Neither does it allow them to continue disseminating their hateful propaganda that was used during preparation and execution of the genocide against the Tutsi.

On behalf of National Commission For The Fight Against Genocid (CNLG) and the victims of the genocide, I condemn the ongoing act of providing platform to notorious genocidaires and the continued attempt to undermine the government that stopped the genocide and its efforts in uniting and reconciling the nation.

I urge the Registrar for the International Criminal Tribunal for Rwanda to stop the act of providing room to genocide masterminds in UN detention facilities in Mali to continue propagating their genocide ideology.

I urge the Registrar also to put in place concrete measures to ensure that the same practices do not continue given that the same happened in 2004 whereby a BBC journalist, Venuste Nshimiyimana, was given access to the prisoners to air their hateful ideas. 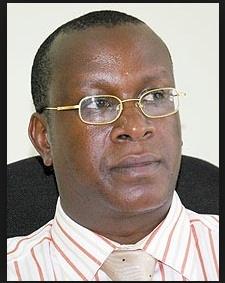 Dr. BIZIMANA Jean Damascène is the Executive Secretary of the National Commission For The Fight Against Genocide Jean-Damascène and the former ambassador of Rwanda to the United Nations.