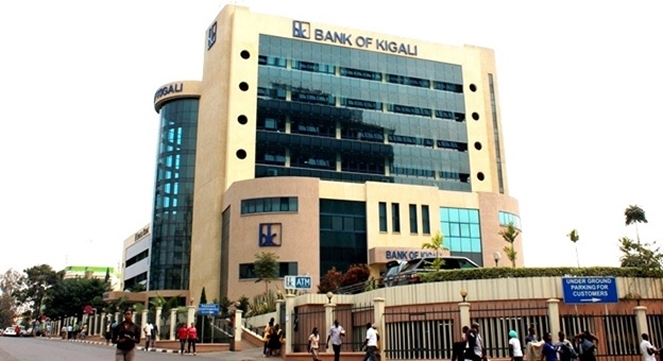 Bank of Kigali , in background is Kenya Commercial Bank in the heart of Kigali city

The robbers had successfully duped KCB and transferred Rwf30.5 million to another fake account in Bank of Kigali.

Police arrested the robbers as they planned how to withdraw the money from Bank of Kigali.

A source revealed to KT Press that the suspect, Gilbert Mazimpaka and three other suspects were immediately apprehended at bank of Kigali.

“On Wednesday, this man (Mazimpaka) came to KCB main offices with a forged cheque. He requested for a transfer of Rwf30.5 million from our client’s account registered in his names,”said the source who declined to be named because of the sensitivity of the case.

“After the transaction, the real account owner received an SMS alert and called us immediately,” the source told KT Press.

When KT Press contacted Bank of Kigali officials, they confirmed the suspect was arrested by Police.

“When KCB discovered its client had lost the money, they contacted us and we immediately blocked the recipient account. We informed KCB which alerted Police that came and arrested him (suspect) this afternoon as he tried to withdraw the money,” a top BK official told KT Press, without providing more details.

“The suspect was arrested at 1pm at Bank of Kigali main offices,” added the source.

Speaking to KT Press, a KCB official said the bank has registered over five similar cases in the past 7 months.

For instance, in 2014, Seheed Olalejan Adebayo-a Nigerian citizen, entered Rwanda and connected with John Ruzige Gasana, a Rwandan and registered a company; Miriensol Holdings Limited claiming that they would be offering travel and tour services.

According to Police, unlike the fact that the business may have looked authentic at a face value, it was actually a scam.

Following the registration of the company, Gasana went to one of the local banks and acquired a countertop card named ‘Point-of-Sell’ (POS) device – a machine used to process financial transaction from one bank account to another using a credit or debit card.

Police said that in less than a week, the tour and travel company had received US$175,800 (Rwf130million) from several POS payments all coming from several individuals across Europe.

CHAN: Bringing Out The Best Of Rwanda