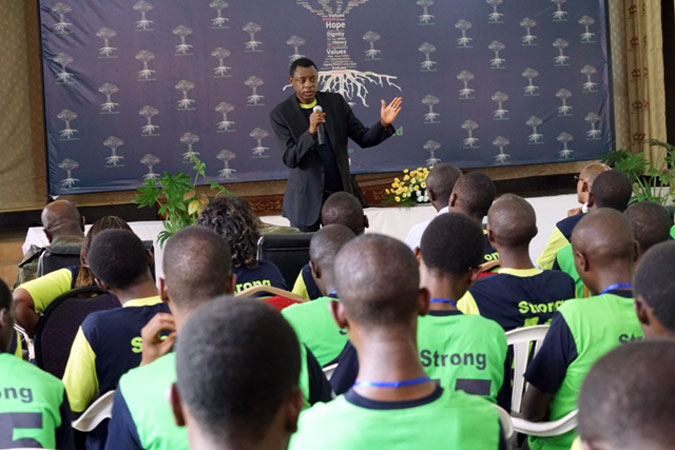 Rwanda’s Minister of Defence Gen. Kabarebe speaking to hundreds of the country’s youth

Rwanda’s Defence Minister, Gen. James Kabarebe said the country’s security cannot be shaken come any threat as he was confident of country defence forces ability to repulse any attacks on its territory.

The Defence Minister warned as he assured over 200 male students who were attending a three day mentorship program at Avega Agahozo Hostel in Rwamagana on Sunday.

Rwanda has topped East Africa as most secure place in several surveys.

The region is experiencing insecurity with some countries like Burundi currently engulfed in prolonged conflict, while DRC is yet to face fresh conflict but Rwanda, its neighbor is the only country likely to maintain its stability with no threats.

Gen. Kabarebe said since 1994 Genocide against Tutsi Rwanda has experienced many threats including the FDLR, an armed outfit of Genocide perpetrators currently hiding in the jungles of Eastern DRC, but the country has been able to neutralize them.

“You think they have not been trying? They have used all the avenues but have failed, forget anything like genocide happening again,” he added as he attracted endless cheers from students.

He was responding to a question from one of the participants after his lecture that closed the mentorship on whether what happened in 1994 would happen again and what young people can do to prevent such atrocities.

“They (France) might have given him (Kayumba Nyamwasa) a lot of money, what they want is regime change, if you target the president you target the nation,” he warned.

Recently, France called for fresh investigations into the plane crash after Rwanda’s dissident Kayumba Nyamwasa accepted to provide evidence, something President Kagame said he is ready even if it means a showdown with France.

The students from all provinces and city of Kigali aged between 22 and 27 years are survivors of 1994 genocide against Tutsi. Most of them witnessed Genocide at a tender age and have been traumatized by the experiences.

On why Rwanda has managed to maintain its security and rebuild itself, Kabarebe said, “We have managed this because we have responsibility to build our country and those (perpetrators) their job is to destroy it.”

Kabarebe said the struggle to fight Genocide against Tutsi and anything similar to that is a continued process; he noted that survivors have a big role to play as they understand its consequences   more than any other person.

“If we stop a bit perpetrators can start immediately. You have a bigger responsibility in developing this country since perpetrators will not build it,” he said.

On controlling trauma, Kabarebe said that different people have different reactions to trauma but urged survivors to embrace commemoration and reasons why they survived to rebuild themselves as they also contribute to social economic development.

The Minister said Rwandans have an invincible strength that enables them to do things even when the world sees them impossible and urged survivors to exploit this strength, “I think researchers should now focus at identifying this strength,” he stated.

Imbuto Foundation is under Mrs. Jeannette Kagame, First Lady of Rwanda working in a move to uplifting the lives of vulnerable populations in Rwanda, and in particular those of widows, orphans of the genocide and impoverished families, most of whom are youth and women.

Kagame in Mozambique for State Visit