When President Kagame visited the Vatican City in March this year on invitation by Pope Francis, he was presented with a gift.

“The gift was a designed photo which the Pope said symbolized a journey Rwanda has moved from darkness to a successful end,” President Paul Kagame told religious leaders and government officials at the National Prayer Breakfast on Sunday.

For President Kagame, the Pope’s gift was a similar sign of the tragedy Rwanda went through and where it is heading today.

One of the cultural beliefs in Rwanda is that ‘God spends the day elsewhere and comes home to Rwanda’.

However, according to President Kagame, during the 1994 genocide against Tutsi, “Humans became unrecognizable. The tragedy turned the country into one that even God did not want to associate with.”

The President told participants gathered at Radisson Blu and Convention Centre in Kigali that Rwanda was dragged into a horrific genocide due to bad leadership, but has rejuvenated and will never be the one God does not want to be part of ever again.

“Today, God is back to spending the day elsewhere and coming back home to Rwanda. This country sank so low, the only way forward is to go up and transform this country,” the President said.

“What happened in this nation will never happen again,” he added.

Lambert Bariho, one of the key speakers at the breakfast related President Kagame to King David of Israel who turned his people torn-apart into a united and civilized Israel. 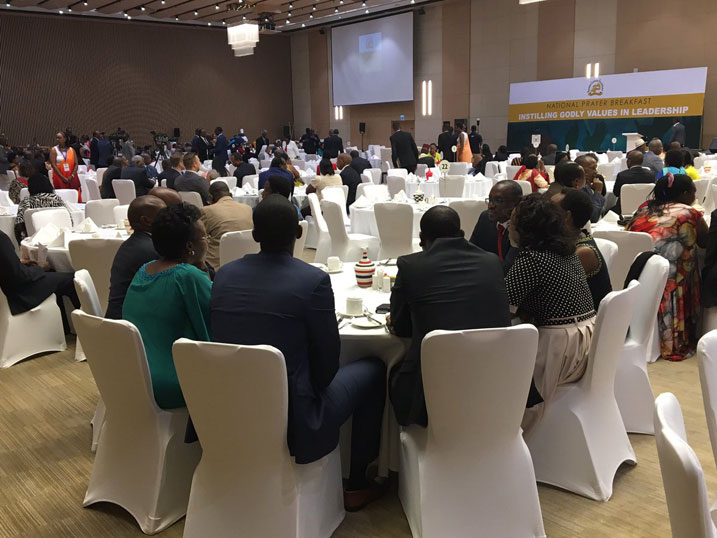 At the age of 40, the biblical King David of Israel was known for his diverse skills as both a warrior and a writer of psalms. King David is biblically known for uniting the people of Israel, led them to victory in battle, conquered land and paved way for his predecessors, Solomon and today today, Israel stands as a global icon.

In similar circumstance, in 1994, Bariho said, Rwandans almost lost their country as over 1 million people died during the 100-day Genocide against Tutsi, but today, God has given Rwandans someone
similar to ‘King David’.

Today, he told the gathering that Rwanda has achieved a lot worth to be thankful for.

“Rwandans have countless things to be thankful for. We have regained peace and stability, justice has prevailed…health sector has been revamped…to mention but a few,” Bariho said.While religious leaders praised Kagame’s leadership in transforming the country, the President, reminded them that; “Leadership will not be given to you for free. You have to work for it to deserve it.”

According to President Kagame, “Education gives you knowledge but using this knowledge appropriately is an individual choice you have to make. To grow towards taking responsibilities, you have to work. Be
willing to work hard not being contented with others doing the work.”

This year’s National Prayer Breakfast marked 22nd anniversary since the annual program was launched in 1995.

The National Leadership Prayer Breakfast brings together religious leaders, government officials and members of the Private Sector to thank God for what was achieved in the past year, and pray for blessings in the New Year.