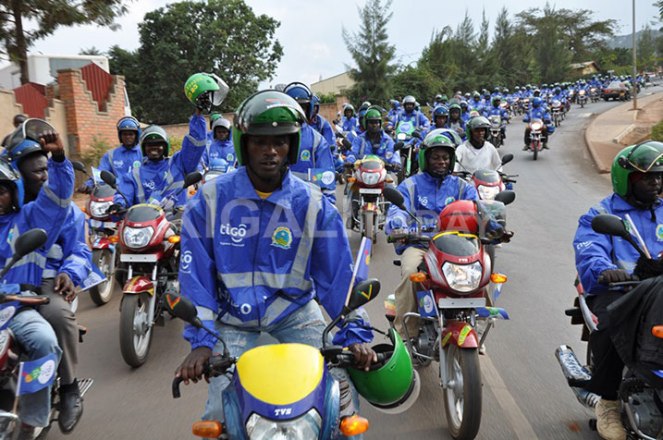 Incidents of hit and run by Moto taxi operators are getting slimmer following the decision by the regulator to install GPS on Taxi Motos operating in Kigali city and other urban centers.

The Rwanda Utilities Regulatory Authority (RURA) has announced that effective January next year, it will install GPS gadgets on more than 20,000 Taxi Motos with the aim to deter irresponsible riding that has cost lives of thousands of road users.

According to RURA, the GPS gadget will help it and the Rwanda Cooperative Agency (RCA) among other partners to track taxi motorcyclists who are major cause of accidents in Rwanda.

During a stake holders’ consultative meeting on Thursday, Rwanda National Police revealed that more than 2,600 road traffic accidents were registered countrywide in a period of nine months (January- September).

Lorries and trailers caused 10% and 5% of the accidents respectively.

“Rwandans are worried about their safety on the road more than their security. The country is safe but accidents keep costing lives of people which is unfortunate,” IGP Emmanuel Gasana said.

According to Traffic Police, the accidents were mostly due to reckless driving violation of traffic rules, drunkenness, high speed, and mechanical faults.

For Taxi motorcyclists, mass mismanagement in their cooperatives was singled out as another cause of accidents, because some riders do not have the required operating license.

“We don’t even know the number of cooperative members on the road. You may find many of them have no driving licenses while others are alcoholic,” said Alexis Uzayisaba, Executive Secretary of FERWACOTAMO, a motorcyclist’s cooperative.

Besides a GPS on the motorcycles, Police said that they are improving the bus tracking system by digitizing the speed governors.

Currently bus drivers manage the device the way it pleases them; they can switch it off to evade police control of the speed. The speed governor was digitized to allow online monitoring.

More than 9000 buses are so far equipped with the device and they are targeting 11 000 installations by December.