Nyirarukundo Defies Odds to Win Bronze at Barcelona Half Marathon 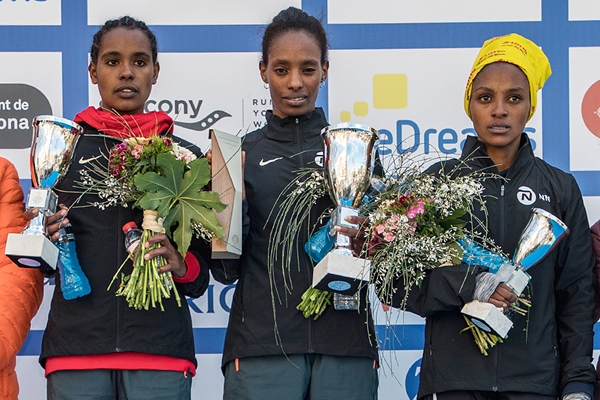 Rwandan Salome Nyirarukundo (right) on the winners podium after winning bronze in the women’s category of the Barcelona Half Marathon on Sunday.

According to the International Athletics Federation, (IAAF), the women’s half marathon was held simultaneously with the men’s event and it begun quite conservatively as the six-woman leading group went through the opening five kilometres in 16:55.

The second five-kilometre segment was much brisker as the 20-year-old Rwandan’s front-running tactics led to a 32:53 split at 10 kilometres. Kipsang could not maintain that kind of pace and had lost 15 seconds by then.

Belete was the second casualty of Nyirarukundu’s fast rhythm. The former 1500m specialist dropped from the main group shortly before the 15-kilometre checkpoint when only Daba, Kuma and Matanga remained in the Rwandan’s wake, clocking 49:06.

When Matanga began to lose ground with the clock reading 59:00, it became clear that Nyirarukundu, Daba and Kuma would be the athletes who would make it on to the podium. Over the closing kilometre the former began to falter for the first time after her powerful display of front-running and the race became a two-way fight.

After a long sprint finish, Daba prevailed over Kuma by one second, 1:08:36 and 1:08:37. Nyirarukundo finished third in 1:08:48, taking almost three minutes off her own national record.

Nyirarukundo has had a perfect start to 2018 as she won silver in the German’s Silvesterlauf race in mid January before winning the first edition of the Kigali Half Marathon staged held on January 28 in Kigali City.

The APR athletics club starlet has been using these national and global championships to fine tune her ahead Commonwealth games due April 4-15 in Australia.