The Rwandan representatives faced Bafia today as they vied for ffth and sixth positions on the final standings.

Revenue highlighted their ability in the match by an early dominance and Bafia lost their way early, it’s a rather straight road to victory for Revenue. Highlights of the match include incredible spikes from Mukantambara, sending a strong message that they were, from then on, truly unstoppable and won the match 3-0.

Bafia settled at the sixth position.

By press time, Ahly of Egypt was et to face Carthage of Tunisia in the women’s African club championship final seeking a ninth Cup triumph, while Carthage will be looking to seal their place in the top echelons of African volleyball history. 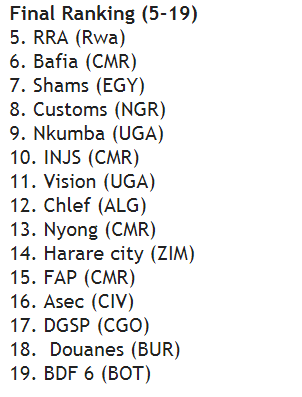