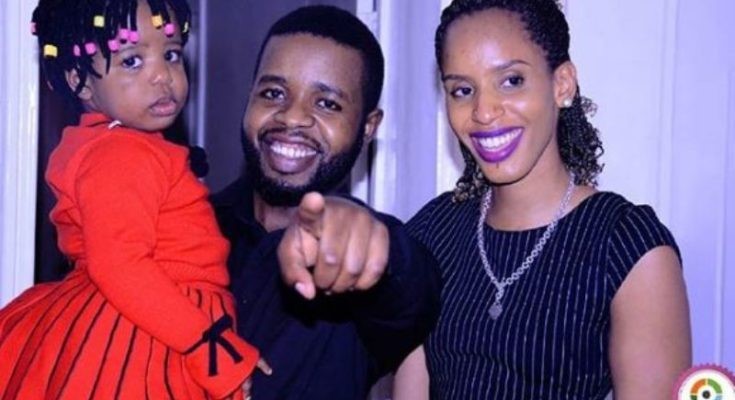 On 1st January this year, Local hip hop star Jay Polly real names Joshua Tuyishimire walked out of the prison after serving a six months jail term and was ushered by wife Sharifah Uwimbabazi together with their baby in a jolly mood.

However, rumors has come out that actually the two didn’t even spend a night together.

The Ndacyariho Ndahumeka singer who had a show on 1st this month at Wakanda club exchanged bitter words with wife and his friends advised him to rent a room at Orient hotel in Nyarutarama after sensing trouble between the two lovers.

Word on the street has it that the rapper is in final stages of releasing a song which will spill everything about his break up with Sharifah.

One of the top close associates of Jay Polly and P Time Pro studios who preferred to be enormous spoke with KT Press.

“It’s not yet official but Jay Polly broke up with wife and he is planning to make it official to the public when he drops the new song which is entirely penned down for Sharifah and himself ever since they started dating,” he said.

Sharifah is a well renowned video vixen who has appeared in various videos including Niwowe by Frank Joe and by doing so, she has been rubbing shoulders with several foreign artists who are believed to have had a fling with her.

On 31st December Sharifah was seen in back stage with Nigerian superstar Patoranking and the day after photos started making rounds on social media  where by Patoranking had Sharifah’s lipstick smeared on his mouth.

Jay Polly recorded the upcoming controversial song in P Time Pro recording studio based in Kagarama, Kigali city and the studio is owned by Rwandese based in Norway.

“It’s true Jay Polly is working on some projects with us and he was supposed to come yesterday to finalize them but he didn’t show up and I can’t disclose more information about it,” says Sam Bakari, P Time Pro representative.

Jay Polly boosts of songs like Ni nde, Ibyiza and many others including Too Much featuring various musicians like Urban Boyz, Bruce Melody and Uncle Austin.