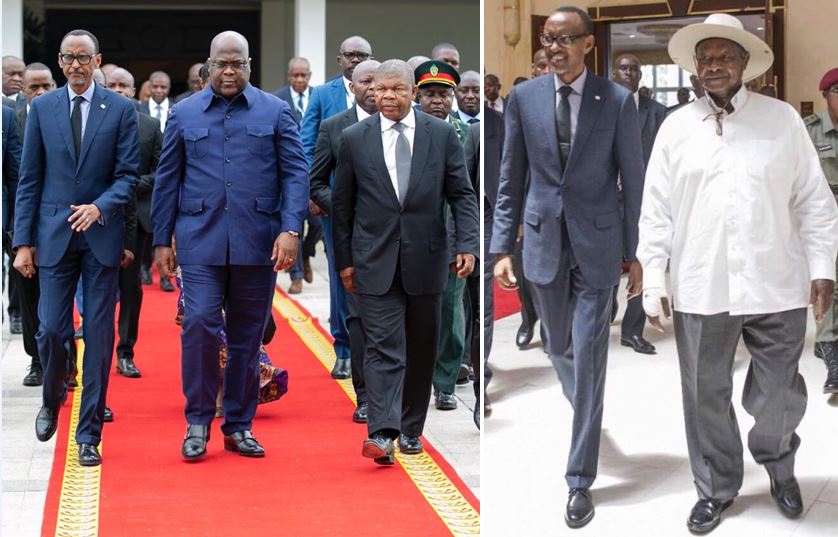 President Paul Kagame and his Ugandan counterpart Yoweri Kaguta Museveni are set to meet in the Angolan capital Luanda this week to sign a Memorandum of Understanding that could pave way for Uganda and Rwanda to resolve the current tensions.

However ahead of the Wednesday summit which is a follow up of the July meeting, Rwanda maintains a cautious approach in the reconciliation process initiated by Angolan President João Lourenço with the support of President Félix Tshisekedi of Democratic Republic of Congo (DRC).

Despite reports by Ugandan media that President Kagame and President Museveni have tentatively reached an agreement, Rwanda is yet to fully confirm if there is an agreement to resolve the outstanding issues that have affected relations between the two neighbours over the last two years.

The Minister of State for Foreign Affairs in charge of the East African Community Amb. Olivier Nduhungirehe confirmed to KT Press that President Kagame will attend the Wednesday meeting in Luanda but did not say that Rwanda and Uganda have reached an agreement.

“Yes. The President is going there. Angola has proposed an MoU between Uganda and Rwanda,” Nduhungirehe said.

Asked if the MoU will address the outstanding issues, Minister Nduhungirehe was non-committal, saying “we will see. It’s an MoU. The implementation part will follow,” adding that it is better to wait for the outcomes of the meeting on Wednesday.

Rwanda has maintained that for the situation to normalise, Uganda must address the three main concerns the Rwandan government has pointed out in official diplomatic notes, which are arbitrary arrests of Rwandans in Uganda, backing groups seeking to distabilize Rwanda and economic sabotage.

Previous meetings between President Kagame and President Museveni have not resolved the issues, with arrests of Rwandans in Uganda continuing. Rwanda has maintained since February that Rwandans cannot go to Uganda if their safety is not guaranteed.

Kampala maintains that the arrested individuals are suspected of engaging in acts of espionage or illegal entry into Uganda, accusations Rwanda denies and has repeatedly asked for fair trials. Hundreds have been unceremoniously deported from Uganda.

Uganda also links the closure of the Gatuna One stop Border Post earlier this year to the ongoing tensions between the two countries though Rwanda maintains the closure to big trucks was aimed at fast tracking the construction of the border facility.

Tensions have affected trade, bilateral and social relations between the two countries but the Angola summit promises to end the stand-off.

According to sources, President Lourenço asked both countries to put their concerns on the table ahead of the summit and the quadripartite summit will find solutions in what is expected to be a lengthy process which will eventually clear out the differences.

Angola’s Minister of Foreign Affairs, Manuel Domingos Augusto was in Kigali on Tuesday last week and met President Kagame at Urugwiro Village, where he delivered a message from President Lourenco before delivering a similar message to President Museveni.

The Luanda meeting, initiated by President Lourenco, seeks to iron out differences between Rwanda and Uganda and at the same time gather efforts to fight negative groups operating in the Great Lakes Region in order to restore lasting peace.

During the first summit on July 12, Angola and the DR Congo offered to work together to facilitate a dialogue between Rwanda and Uganda after bilateral relations between the two neighbouring countries went sour, over the last two years, as both countries trade accusations.

Relations between Rwanda and Uganda have not improved much despite the July meeting despite a communiqué released then indicating the willingness of both parties to iron out their differences.

“As far as the bilateral relations between the Republic of Rwanda and the Republic of Uganda are concerned, the summit welcomed the willingness of the two parties to continue a dialogue with a view to finding a solution to the existing problem,” the communiqué read in part.

Last month, Minister Nduhungirehe told KT Press that Rwanda expects Kampala to act on the three issues the Rwandan government raise –stop arbitrary arrests and torture of Rwandans in Uganda, end all kinds of support to groups seeking to distabilize the government of Rwanda and end economic sabotage.

Rwanda insists Uganda backs rebel groups fighting the Rwandan government, including Rwanda National Congress (RNC) and the Democratic Forces for the Liberation Rwanda (FDLR), which are all grouped under a coalition dubbed as P5.